A History of Aviation in and around Long Beach, California 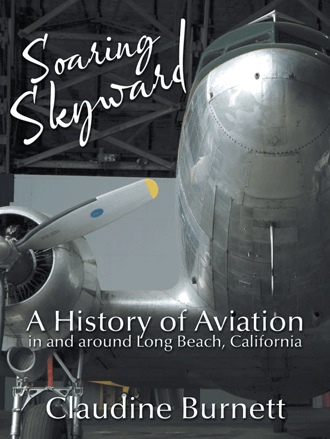 With the end of the war in Europe, servicemen returned home, trying to get on with their lives, attempting to pick up where they had left off. One of these returning veterans was aviator Earl Daugherty. Plans had been underway in 1917 for Daugherty to open his own aviation school in northwest Long Beach. Earl and his father purchased 20 acres at Bixby Road and Long Beach Boulevard. The property, though marshy, had many willow trees and a small pond where youngsters sailed toy boats. But plans were interrupted by the war. Materials for housing and other construction, in short supply during the war, were available once again. In April 1919, George W. Hughes took advantage of this post war boom in housing and purchased 200 acres of land lying north of Wardlow Road for $250,000 from Jotham Bixby & Company. The subdivision, christened “Chateau Thierry” in honor of America’s great battle in France, was the same area Daugherty had been looking at for his proposed aviation school. However, not even houses were going to stop Daugherty from going after his dream. In May 1919, father and son pulled up the trees and building began on Earl’s 30 x 45 foot hangars. On June 6, 1919, the aviator opened the Daugherty School of Aviation, with passenger carrying on the side. Daugherty’s new operation was highly successful. Records show he carried 1,785 passengers that first year. Daugherty, a flight instructor during the war, also began to train stunt flyers such as Wesley May, Clarence “Ace” Bragunier, Auggie Pedlar and Frank Hawks. Daugherty’s was not the only aviation concern in the area. In July 1916, the Western Aviation Company of Long Beach began building in the harbor area near Wilmington. Incorporated with a capital of $10,000, the company planned to manufacture airplanes, operate a passenger-carrying service and conduct an aviation school. The four owners were all residents of Long Beach: Dr. Samuel L. Good, Burdett D. Fuller, Elzie H. Duffey and Bernard Birnie. But tragedy ended the venture when an aircraft they had recently rebuilt crashed and killed Donald Gwartney and Edwin Birnie. Other Los Angeles County aviators were also building airfields. At the same time that Daugherty’s Chateau Thierry field was becoming operational Sid Chaplin, brother of actor Charlie Chaplin, was preparing to open a field on the south side of Wilshire Boulevard at Crescent (now Fairfax). It would be known as Chaplin Airdrome and later Rogers Field. Not far away, on the north side of Wilshire at Crescent, soon-to-be movie mogul Cecil B. DeMille’s Mercury Field was already in operation. Venice Airport, at the southeast corner of Venice Boulevard and Washington, was also an early flying field owned by movie producer Thomas Ince. The future of aviation seemed assured, but where this future would be centered and what direction it would take was still up in the air. On May 29, 1919, tentative plans to establish passenger, express and mail airplane service in California, with Long Beach as a terminal, were outlined to Long Beach Chamber of Commerce officials by representatives of the United States Aero Transportation Company. Four big planes, each capable of carrying twelve passengers, two flying north to San Francisco and two flying south to San Diego, would stop at Long Beach daily. A branch line from Long Beach to Catalina Island would also be considered if Long Beach spent an estimated $25,000 to build a terminal. To finance this, the United States Aero Transportation Company said stock could be sold to Long Beach investors with the proviso that the money be spent on the local terminal, which had to be spacious and equipped with shops, hangars, gas tanks and a macadamized field. The Aircraft Equipment Company of Los Angeles, also anxious to cash in on this new business of aviation, approached the City of Long Beach on April 28, 1920, proposing a regular air jitney service between Long Beach and San Diego for a $10,000 investment. Yet they too needed a proper terminal. Earl Daugherty saw the opportunities. On July 16, 1920, he received official city endorsement to develop a municipal flying field on land situated west of Long Beach Boulevard and south of Willow Street. This low lying, marshy land, not suitable for residential or other uses, would be filled in by the city, turning it into a municipal flying field. Arrangements were made between Daugherty and the City of Long Beach to grade, level and fill the 60 acres where needed. 7,000 cubic yards of dirt were placed in the hollows, but much of the field was already so level it required little fill. All that was needed was three to four inches of decomposed granite spread over the surface of the acreage to put it in ideal condition. In consideration for his help, the name Daugherty Municipal Aviation Field was agreed upon. Long Beach was now one of only a few western cities to have a municipal airfield, one open to all visiting aviators. In addition, Army and Navy aviators could use it free of charge. The grand opening and dedication of the Long Beach Municipal Aviation Field took place on Christmas Day of 1920. The inauguration ceremony was part of the Aero Club of Southern California’s National Flying Show and Races held December 25, 26 & 27, 1920. It was an instant success. Over 2,500 paid admissions were recorded each day. All agreed it was well worth the money. There were thrills a plenty. Nineteen-year-old stunt walker Wesley May amazed spectators by standing on his head on the wing of Daugherty’s aircraft while the plane was landing, setting a world’s record. Also featured was a spectacular 20-mile race between two women pilots, Aloysia McLintic, a pupil of Daugherty’s, and Neta Snook. This was the first all-female air race ever held in Southern California and it inspired a young woman named Amelia Earhart.

Flying was a perilous adventure, with death only a small breath away. Many lost their lives in pursuit of their dream and have remained relatively forgotten, until now. (italics until now) “Aviation fever” struck young and old alike, especially after the four Dominguez Air Meets held in Southern California between 1910-1913. It inspired many such as the Birnie and French brothers, Charles Day, and Glenn Martin to build their own air ships. For others like Frank Champion, Long Beach’s first airman, it meant learning from the best---traveling to London, England, to study with Louis Bleriot, and going on to teach others, such as Long Beach Airport founder Earl Daugherty, to fly. There were also daring women: Tiny and Ethel Broadwick, who parachuted out of airplanes when many men refused to do so because they considered it “too dangerous;” Gladys O’Donnell instrumental in founding the Women’s Air Derby; World War II ferrying pilots, led by Barbara Erickson London, whose service to America was not recognized until 1977; Dianna Bixby and Joan Merriam Smith trying to complete Amelia Earhart’s dream of circumnavigating the globe. Soaring Skyward (italics for title) introduces remarkable men and women who embraced the dangers and challenges of flight. It also tells the story of the Long Beach Municipal Airport, the center of much of Southern California’s aviation history. The early days of ballooning, air circuses, parachute jumps, barnstorming, air meets, forgotten military sites and much more are all explored in this well documented look into the past, and future, of aviation in Southern California. After twenty years of extensive research, Ms. Burnett’s book is sure to open up new sources of information for aviation and history enthusiasts, and most definitely shed additional light on the past.

Claudine Burnett has actively been pursuing Southern California history since 1971. She is the former head of the Literature and History Department of Long Beach Public Library and a member of various historical societies. Her credentials include a B.A. in history from the University of California, Irvine; a Master’s in Information Science from the University of California, Los Angeles; and a Master’s in Public Administration from California State University, Long Beach. She has written several other books and articles on Southern California history for which she has received numerous awards. Named one of the City of Long Beach’s most influential people in the cultural arts by the Long Beach Business Journal (italics for newspaper title), and described by the Long Beach Press Telegram (italics for newspaper title) as “one of this town’s finest historians,” Ms. Burnett’s latest book is sure to live up to her reputation as the (italics for the) expert on things Long Beach.