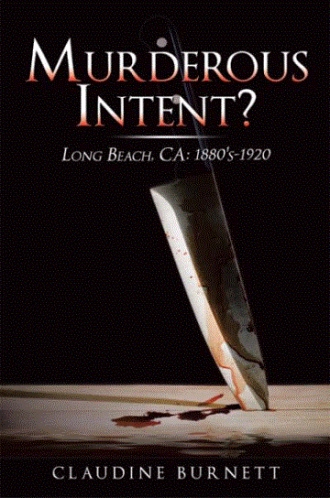 Murder should not be taken lightly, but it sometimes has a somewhat humorous side as this tale shows.

The media had a field day with Long Beach's misprint.  Taking part in the fun, Mayor Louis Whealton told the press he thought City Clerk Harry B. Riley should be appointed to enforce the cat-speeding limit since he was the one who hadn't corrected the typing mistake.  The Long Beach mayor went on to offer a prize of $10 to the person writing the most humorous news clip on the regulation of the speed of cats.  The following appeared in the March 8, 1915 Los Angeles Times:

A handsome Angora cat belonging to Mrs. Albert Laughrin was taken into custody yesterday on a charge of exceeding the cat speed limit. The case of 'Betsy' will be made a test one, according to police officers. If she is convicted it is darkly hinted that all of her nine lives will go out simultaneously.

On Ocean Avenue and First Street the hotels are so close together that the roofs make one continuous speedway for innumerable cats.  The Long Beach "cat cops," have endeavored to take these marauding and musical felines alive in vain, and they are determined to act in accordance with the new cat-speed law, and shoot the cats on the wing, where they can later testify to excessive speed.

Not all found this frivolity over cats funny.  Cats could be a nuisance.

W.L. Jennings of Long Beach was a good neighbor. He frequently helped his widowed neighbor, Elizabeth Shaeffer, when she needed work done around her house. He was a little taken aback, however, when she asked him to kill her cat.

Mr. Jennings and his family were walking out the door to go to the movies on September 17, 1916, when their elderly neighbor came in with her request.  It seemed the cat had been giving her all sorts of problems---getting into the breakfast dishes, leaping onto the table to steal food and scratching furniture.  She had tried to shoo the cat away, make if find another home, but the animal kept coming back, sometimes even bringing her "gifts" such as a dead bird or rat. It had adopted her, even though she didn't want a cat; she barely had enough money to buy food for herself let alone support a cat.  Mrs. Shaeffer was extremely distraught.  The only recourse, it seemed, was to kill the cat.

Jennings sent his wife and three children on the the theater. He thought it best that his children not be around when he performed the deadly deed. He suggested that Mrs. Shaeffer accompany the family to the movies and told them he would join them shortly.  But he never got to the theater.  When he failed to appear his wife assumed the "chore" had taken longer than he had thought.  She had a big surprise awaiting her when she returned home.  She found her husband dead.

Jennings' face was buried in a chloroform-soaked quilt, which covered a bucket in which he had placed the cat.  The feline was nowhere to be found. It seemed that Jennings, bending over the quilt which covered the pail from which the cat escaped, absorbed so much of the chloroform that he fell forward, burying his face in the quilt.  Breathing the fumes, he died.  Was the cat a killer of not only feathered creatures and rodents, but of Mr. Jennings?

Not all thought cats a nuisance. There was one man who would kill to protect his beloved feline..........

Claudine Burnett  has now written another book sure to be savored by those interested in Southern California history.  Concentrating on a span of years covering the 1880's to 1920, Ms. Burnett has uncovered fascinating true stories of death and murder.

- The bandit Sylvestro Morales who robbed and murdered his way through the Southland in 1889 and his capture at the Rancho Los Alamitos.

- Violence and death amoung the Basque and Mexican sheepherders and sugar beet workers of Southern California.

- Long Beach City Trustees hung in effigy and how their attempt to get rid of a local saloon in 1896 brought about the death of the city.

- How the murder of a Long Beach policeman in 1912 led to additional tragedy and sorrow but also brought about the adoption of modern criminal investigation.

- The kidnapping and torture of a Long Beah youth in 1916 by notorious, insane murderer Harry Thaw, whose killing of famed archtiect Stanford White made headlines around the world.

Learn the origin of:

- The towns of Long Beach and Los Alamitos

- Lew-is the Light who believed he had a special delivery service to God.

- "Whistling" Davis who refused to bury his dead daughter.

- Cantankerous "Old Man" Ranous, killed and buried in a pile of manure.

- The spirits of murder victims who refused to rest.

- Pete Labourdette, a notorious Los Alamitos saloon keeper, and the murders he worked to cover up.

These are but a few examples from a book you won't want to put down until the very end.

She has been a columnist and feature writer for various journals and has written two other Long Beach history books: Haunted Long Beach and Strange Sea Tales Along the Southern California Coast. She has also authored a history of Huntington Beach, California: From Barley Fields to Oil Town and contriubuted to Balboa Films: a History and Filmography of the Silent Film Studio and The Heritage of African Americans in Long Beach.

She has received numerous awards for her contributions to Southern California history.