The 4 Stages of Butterflies & Humans 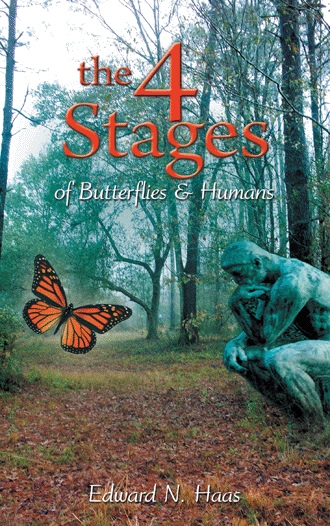 This book’s verbalization of its main theme is perhaps best called an exercise in Depth Psychology. In elaborating on the larval vs. the metamorphic stages of the human self, it proposes first to set forth the origin of the human ego. It then moves on to how the larval stage self allows the ego to acquire a dangerous bit of control over the self vs. what the self must do to prevent such a disaster. It further divides that dangerous bit of con¬trol into three levels of intensity. At the first level, the self lets the ego keep it ignorant of its meta¬mor¬phic stage. At the second level, the self lets the ego make it hate its metamorphic stage and to be ad¬a¬mantly opposed to moving on to it. At the third level, the self lets the ego duplicate the second level’s ef¬fect and let’s the ego add to it some degree of infatu¬ation with criminal behavior. In some cases, the re-sult is an inveterate addiction to mass murder in an attempt to take re¬venge on everyone and everything for failure to make the ego equal to God from birth.

Born April 13, 1936, in New Orleans, the author graduated from Jesuit high school in 1953. After a single, fruitless semester at Loyola University, he joined the Air Force Dec. 7, 1955. Honorably discharged April 1960, he underwent 2.5 years of floundering so severe he nearly went insane. Desperate, he gave away everything and, for 13 years, lived as a wandering hermit. Seeking as much time as possible for inner reflection upon self, God, and the nature and purpose of reality, he criss-crossed the US on foot 4 times. At first, he lived on whatever food and clothing he could beg. After learning how to live on $1.00 a day, he turned to working at monasteries in the winter for the money to feed and clothe himself during the next spring, summer, and fall of walking. The monasteries also provided libraries in which he could read, and extract notes from, the great writings of the Catholic Church. In August of 1975, his father lost his mind, and it fell to the author to tend to his parents in their hour of need. Thus, after 13 years, his preferred lifestyle ended. Dire poverty gave way to economic independence and total seclusion to what little privacy can be enjoyed by bachelors who prefer to avoid partying, to stay mostly at home, and to bury themselves in as much reading and writing as the world will allow. After his father's death in 1981, the author cared for his mother until her death in 1996. In this book, the self-educated author of 17 self-published books seeks to share with others some of the chains of thought down which his mind was led by 13 years of heroically intense introspection followed to date (2008) by 33 years of moderately intense introspection.