A Reply to Pope Benedict XVI and More 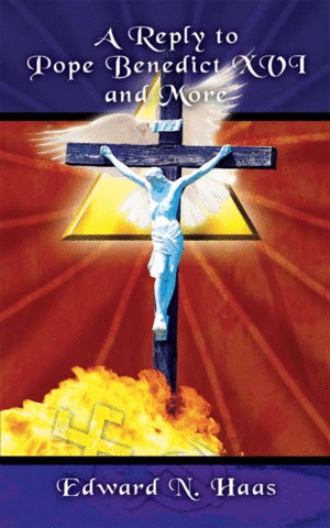 It is indeed a wicked and cruel act to hand over an in­nocent man to torment and to death against his will. Yet God the Father did not so deliver up Christ, but in­spired Him with the will to suffer for us. God’s severity (cf Rom. xi. 22) is thereby shown, for He would not re­mit sin without penalty.

——ST. THOMAS AQUINAS: Summa Theologica III, Q. 4, A. 3, Ad 1. (Here, I am greatly at odds with the su­perficial sense of what St. Thomas and St. Paul say. For, I say this: If “God” means solely The Divine Na­ture, then only God’s sublimely permissive benevolence “is thereby shown”. Severity and a refusal to remit sin without pen­alty had nothing to do with it. How so?! The Divine Na­ture is too godly, good, and loving to resort to sever­ity, coercion, affliction, and the imposi­tion of penalties. In the whip-wielding and suffering Christ, The Divine Na­ture was merely condescending to give us the kind of God we—as a result of Original Sin’s hereditary stain—secretly and instinc­tively crave, pre­fer, and worship—namely: a wrathful God, which is to say a God Who agrees with us that pain is a supremely useful tool be­cause: (1) by inflicting it suffi­ciently, one can de­feat any and every kind of evil, and (2) by enduring it suffi­ciently, one can make amends for any and every kind of gross behavior whether evil or not. Liars all are they who claim they choose not a God given to the violent, coer­cive way of insects, beasts, and humans. And why should we insist on such a lie when we have such a God in Jesus Christ—that True God/true man Who, for our sakes, consented to be crucified? Who but the insanely proud would blush to admit worshipping such a “God of wrath”? It’s the message this book’s pages shall press home with perhaps a vengeance.)

In his encyclical, Spe Salvi, Pope Benedict con­dones Dostoevsky’s protest against the idea of God al­lowing universal salvation. It’s one thing to preach uni­versal salvation, and another to rail against God’s allow­ing it. The latter is the same complaint hurled at their Master by the workers in Matthew 20: 11-12. How rightly He denounced them as resenting His generosity and attacking His right to do as He pleased with His belongings!

There shall be no universal salvation. But why?! It’s not because God will not allow it; rather, it’s because God will not force it. Why have to force it?! Sinners hate God with so great a passion, they’d rather be in hell eternally cursing God than be in Heaven worshipping God forever. Why so great a hatred?! The extent to which God’s divine standards contradict and belittle theirs is so infuriating, their irrationally proud egos ex­plode more violently than a hydrogen bomb can. For them, the idea of worshipping what in­sults them that grievously is far more tor­ment­ing than the tortures of hell. How hell de­lights them with its guarantee their ha­tred shall never diminish one iota! Sinners, then, would go to heaven only if forced to go.

There is no coercion, severity, retribution, etc. in The Divine Nature. Why, then, the Atonement?! It’s not a case of Incarnate God of­fering enough human pain to allow The Divine Nature to “get even” with us for some offense to divinity; rather, it’s a case of In­carnate God offering pain so worthy, it gives God’s di­vine stan­dards, just cause to let our natural, coercive, pain-lov­ing, re­talia­tory love “get even” in merit with God’s, supernatu­ral kind. Why would Incar­nate God need to do that? This book's answer is an eye opener.

Born April 13, 1936, in New Orleans, the author graduated from Jesuit high school in 1953. After a single, fruitless semester at Loyola University, he joined the Air Force Dec. 7, 1955. Honorably discharged April 1960, he underwent 2.5 years of floundering so severe he nearly went insane. Desperate, he gave away everything and, for 13 years, lived as a wandering hermit. Seeking as much time as possible for inner reflection upon self, God, and the nature and purpose of reality, he criss-crossed the US on foot 4 times. At first, he lived on whatever food and clothing he could beg. After learning how to live on $1.00 a day, he turned to working at monasteries in the winter for the money to feed and clothe himself during the next spring, summer, and fall of walking. The monasteries also provided libraries in which he could read, and extract notes from, the great writings of the Catholic Church.

In August of 1975, his father lost his mind, and it fell to the author to tend to his parents in their hour of need. Thus, after 13 years, his preferred lifestyle ended. Dire poverty gave way to economic independence and total seclusion to what little privacy can be enjoyed by bachelors who prefer to avoid partying, to stay mostly at home, and to bury themselves in as much reading and writing as the world will allow. After his father's death in 1981, the author cared for his mother until her death in 1996.