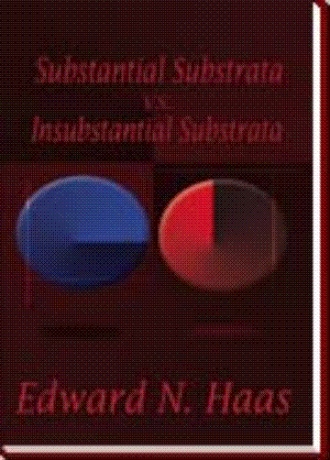 To myself, the distinction between substantial and insubstantial substrata is as clear as a bell. Disgustingly, decades of trying to communicate that difference to others has proven to me, over and over again, that it is virtually impossible for anyone else to understand what I’m talking about.

As I begin this latest and perhaps futile effort to communicate that difference, a desperate thought occurs to me: Maybe at least some readers would find the going easier, if I were first to familiarize them with the most basic of the concepts comprising the cosmological theory which I have founded upon the distinction between substantial and insubstantial substrata. Well, I’m so desperate to find a way to ease the burden of following my way of philosophizing, I might as well try it.

So then, the remainder of this preface shall present the reader with a synopsis of a cosmological theory which, in its original presentation in my book Introspective Cosmology II, took 570 pages and 238,000 words. Since what follows takes less than 6,000 words, it’s quite an achievement in the art of synopsizing.

The Haasian concept of a form can first be depicted as a larger, transparent cube with a smaller opaque cube centered inside the larger cube. As for why that is so, let’s leave that till later. For now, be content to imagine that the two cubes are concentric.

Next, imagine that what we’ve depicted thus far remains that way as we examine it for a while and call it: "stage one of a two stage cycle". After we have examined the picture to our heart’s content, we snap our fingers, and, in an instant, the dimensions of the inner, opaque cube are suddenly the same as those of the larger, outer cube. In other words, we are now looking at a single, opaque cube. That’s a way of saying that, in its current act, the form is actualizing all of the potency available to it. As we examine this new state of the form for a while, we call it: "stage two of a two stage cycle".

After examining it for a while, we snap our fingers, and, in an instant, the dimensions of the inner, opaque cube are once again one-half those of the outer, transparent cube, and we have returned to stage one of the two stage cycle. It’s just that now we have commenced the second of those cycles.

So far, that’s a way of saying that this particular form is capable of only two distinct acts, and, as we’ve seen, the difference between those 2 acts is this: In one act, the form actualizes 100% of the potency available to it, and, in the other, actualizes 12.5%.

In Haasian cosmology, that particular form is called: "the form of the universe", "the form whose native ontological distance is 2256 (i.e.: roughly 1.15792 x 1077)", and "Omega F1". Only one such form has been created native to that ontological distance (i.e.: OD for short), and "native OD" means the ontological distance at which a form was created. It also means something about how the form always rotates on two of its three axes. Well get to that later.

What, though, is "ontological distance"? For one thing, OD determines the description of every form’s two basic acts while still at its native OD. From their native OD, forms can change to a current OD and, thereby, increase the number of different acts they can perform.

To illustrate that, let’s examine the form at the opposite end of the scale, namely: the form native to OD one. It’s called "Alpha F1". Here again, there is an outer cube which is larger and transparent, and an inner cube which is opaque and much smaller. As before, their centers are one. As before, the outer cube of Alpha F1 is as large as the outer cube of Omega F1. For all forms, the dimensions of the larger, outer cube equal those of the form of the universe. That’s a way to say all forms have the same potentiality.

What, now, shall we say of the dimensions of Alpha F1’s smaller cube? As some may have guessed already, those dimensions are 2-256 (Notice the minus sign.) times those of its larger, outer cube.

Here again, as long as the form is at its native OD, it can perform only 2 distinct acts. In one, it actualizes (2-256)3 of the potentiality available to it, and, in the other, it actualizes an eighth of that. 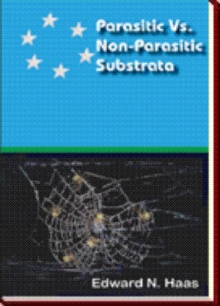 Imagine a smooth, solid glass sphere four inches in diameter in your right hand. It’s mostly transparent but tinted blue. Imagine another tinted red in your left hand. From of old, many have said each of those spheres is a bundle of the substratum "matter", and each is a separate thing because it is not stuck either to the other globe or to your hand or to any other bundle of matter.

They then contrasted each globe’s internal characteristics with its substratum. The latter, they said, can avoid annihilation without being stuck to something else. The former cannot. For example, the blue globe does not have to cohere to the red globe or to your hand in order for its matter to avoid disappearing. Shatter either globe, and, instantly, its spherical shape vanishes.

Say some substrata are insubstantial, and you’ll describe that relationship very differently. You’ll say each globe’s matter is something, repeatedly produced by, cohering to, and filling the gaps between, those ultimate particles. It’s then easy to explain the globe’s sensible characteristics. For, you’ve introduced a new kind of matter which may well have internal characteristics identical to those you sense.

Are all substrata substantial or some insubstantial? What are the consequences of saying all are substantial?

This book answers those questions as it seeks two goals: (1) to show how universal skepticism results from saying all substrata are substantial, and (2) to lay the foundations for history’s most novel cosmological theory – a theory which some have called "a thing of beauty like no other I’ve ever witnessed."

In August of 1975, the author’s father lost his mind, and the author’s siblings insisted he was the only one in the family with the time and ability to tend to their father in his hour of need. Thus, after thirteen years, the author’s preferred lifestyle came to an end. Dire poverty then gave way to economic independence, and total seclusion gave way to what little privacy can be enjoyed by bachelors who prefer to avoid partying and to stay home and – as much as possible – to bury themselves in as much reading and writing as the world around them will allow.

After his father’s death in 1981, the author took care of his mother until her death in 1996. In this book, the self-educated author of thirteen self-published books seeks to share with others the avenues of thought down which his mind was lead by thirteen years of heroically intense inner concentration followed by twenty-two years of moderately intense inner concentration.