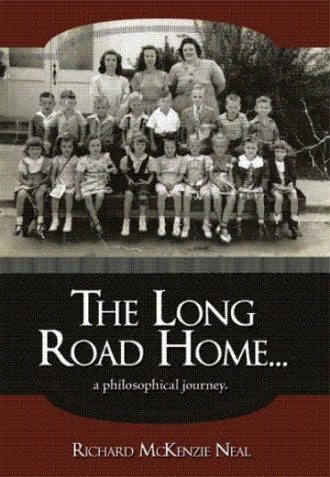 Driving through the hours I found that my solitude allowed my mind to drift more seamlessly back to my beginnings. While many things were resurrected…the good, the bad and a lot of gray area in-between…some clear and detailed, others remaining murky and questionable…and rightfully so. We know, from my first book, what propelled me out into the bigger world, but were there underlying drivers that I was oblivious to? Why do some remain home while others leave…only to search for the path back, as their lives wind down? And why do we say, you can never go home…? I’ve heard it said, “In fantasy and myth, homecoming is a dramatic event…bands play, the fatted calf is killed, a banquet is prepared, and there is rejoicing that the prodigal has returned. But the reality is that exile is most commonly ended gradually, with no dramatic external events to mark its passing. The haze in the air evaporates and the world comes into focus, seeking gives way to finding, anxiety to satisfaction. Everything has changed…yet nothing has changed.” My hometown (Pleasantville) was no longer my hometown. The downtown area was being abandoned with the businesses moving out to the edge of town…leaving many empty storefronts. The demographics had changed dramatically (not a condemnation, but an observation) and the old neighborhoods were run down and in various stages of disrepair. Once well-kept yards had disappeared beneath the accumulations of non-descript clutter. Past friends and classmates were difficult to locate and often even more difficult to recognize once found. Some of course had already passed, some were in various stages of dying (cancer) and many others were in poor health requiring personal assistance, walkers, canes and vast assortments of prescription medications. Another group included men who had survived heart attacks and stroke, but would never be the same…while others were chain smokers and overweight. And yes, there were a number of folks from my age group who had managed to maintain a healthy lifestyle and they looked well. But “we” were the exception. I also discovered that many of my cronies had never embraced or even accepted the computer as a modern-day necessity. A few chapters back I wrote about some lingering details that I’m hoping to put to rest in this book. The first, you already know about…finding a biological son that I’ve never met. The second one began over 50 years ago as a teenager growing up in Arkansas. I brought it to life in my first book and now I’m hoping to lay it to rest…dead or alive. And like the first search, the trail is cold and lacking vital information such as, exact age and a full name. James and I were friends back in the 50s when it wasn’t “politically correct,” and we were as conspicuous as black and white. I only knew (or remember) James by his first name and a nickname…“Snowball.” James was approximately my age and we were both physically gifted…six-foot tall and slender. In retrospect…we were both, apparently…also colorblind. Another commonality shared by departing generations is the spiritual acceptance of an “after-life” as their current life winds down. I think most of us have always had that inkling inside, but with our mortality staring us in the face…that notion takes on an elevated sense of urgency. The timing of “losing touch with reality,” could also suggest that we’ve given up on this world and are reaching out to the Promised Land. Sounds almost hypocritical…waiting until near the end of the game before choosing sides. What were we thinking, that we were immortal and would live forever? Nope! - Just young, dumb, know-it-alls. That same spirituality also brings clarity to the intangible drivers of this whole going home phenomenon. To go home is to experience the peace and love arising from our self-effulgent heart center, the core of our being. We find that all the love and happiness we have ever wanted is already available to us, every moment, without fail. A deep yearning causes us to search for our innate roots, the womb of our origin. We have gone out into the world, experienced “life” with its pains and pleasures, happiness and sadness. We never found a lasting happiness from those experiences. What we sought was not outside of ourselves. Early on in this book I suggested that going home isn’t about returning to one’s physical birthplace or home, but rather to another time…another place (Fridays With Landon). The truth is that we cannot go home and except for our memories…home, as we knew it, no longer exists. It has been relegated to the archives of a bygone time where we are the keepers and with our passing the past will be lost to the ages. And in time, the reality will be that our era was irrelevant at best, or it was just delusional manifestations of an antiquated, out-of-touch, departing generation. Or perhaps “the journey” is our home, and the going home phenomenon is an innate human need/desire to say good-bye as our journey winds down…as was my farewell tour. Every journey will eventually realize its intended destination, and it’s not important to rush that arrival. Sometimes tossing the map is the best way to get where you really need to go. But there is yet another applicable country saying: “You can’t get there from here.”

By this point in our lives (my target readers) we’ve all heard the old adage “You can’t go home.” But what does it mean? As life winds down and the drone of existence begins to wane, I'm feeling an intangible desire or need to reach back into my past and reconnect with a by-gone time and people...living and/or dead. It feels like an elusive melody that seems distantly familiar, yet strange and unidentifiable. If all the above sounds like a premonition of the inevitable, I agree and accept that my time is ticking away. But it’s not about dying…it’s about going home! I’m not afraid of dying, but I do struggle with the reality that I will no longer physically exist. I have to wonder if the term “going home” isn’t a misnomer and maybe…just maybe, we’re trying to return to “Neverland” (Fridays With Landon). When we were very young we searched for that elusive, utopian community…and studies have shown that in our declining years, we slowly revert to our childhood. Another line-of-thought is that it’s all just a mirage. We know and accept that a man can be dying of thirst, in the middle of the driest desert, and his mind will anesthetize him by creating the illusion of an oasis. If we can acknowledge that phenomenon (the mind’s coping mechanism) then it shouldn’t be much of a stretch to reason that the elderly possess those same innate coping capabilities…to ease their journey home. Of course their mirage would be about “going home”…not to a place, but to another time. What is the driver for this (apparently) universal pilgrimage? I have to wonder, even compare it to an addict’s motivation (The Path to Addiction)…one more trip down that path of pleasant memories even as the host is being sacrificed.

Richard was born in Hope, Arkansas (Bill Clinton’s boyhood home), in 1941 and his father was gone prior to Richard turning two years old. He never knew the man, but attended his funeral as a sixteen-year-old. Before boarding a Greyhound bus for California, at seventeen, Richard knew two stepfathers and a number of others who were just passing through. During those teen years, before succumbing to the beckoning allure of the outside world, Richard worked at an assortment of low-paying jobs. Summers were spent in the fields…picking cotton and/or watermelons and baling hay. After dropping out of school, eloping and landing in California, he soon realized how far out of his element he had ventured. And without the guidance of his “Constant Companion,” Richard would have spent a lifetime floundering in a sea of ignorance and ineptness…and his books would not exist. Richard’s first book (Fridays With Landon) was driven by his son’s life-altering heroin addiction. He had hoped not to author a sequel, but left the book open-ended due to historical concerns, which did in fact…resurface. For 25 years the family has endured the emotional highs and lows associated with the chaotic, frustrating and more often than not…heartbreaking task of rescuing one of their own, from the always ebbing and flowing tide of addiction. The unintended sequel (The Path to Addiction…) was triggered by a mind-numbing relapse after 30 months of sobriety. The second book was then written to bring closure…one-way or the other. The author advanced several possible scenarios for the ending of that book, but only one of those possibilities was favorable… His third book (The Long Road Home…) is a philosophical journey that we’ll all experience as our time here begins to dwindle. All three books were written after retiring from the oil industry.