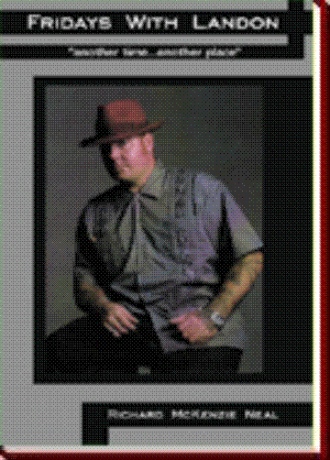 This collection of letters began simply enough as routine communication between a father and his troubled son.  With that in mind, I committed to writing a letter a week…and a letter has been mailed every Friday since (“Fridays With Landon”).  The underlying purpose was to keep him company and provide a measure of support as he served out an eighteen-month sentence.  The accompanying letters and the style in which they were delivered were, and continue to be, driven by numerous external influences.

My first letter from Landon, after he had made his way through the court system and had been placed for the duration of his incarceration was dated 6/2/04.  His words spoke of the depth of his despair and the internal torment that, if not for the grace of God, “the arrest,” he would have probably ended his life that night.  He not only requested that I correspond with him, but that I fill in the gaps of my life…his words were, “I know nothing of you before our family.”  I was taken aback…I had rarely, if ever, thought about my past life…much less verbalized it to others.  Initially, as I reflected on his request, I wondered if I even remembered anything about my past…or had I buried it so deeply (through denial) that I would never be able to resurrect the information that he was requesting.

The timing of Landon’s inquiry, about my life, really struck home because of a movie that I had viewed a few weeks earlier…entitled “Big Fish.”  The story was about a man who was dying and his adult son was upset with him because…he said, “Dad, I don’t even know who you are!”  The father was flabbergasted by what his son had just said and replied, “I’ve always told you everything about my life.”  The son’s retort was, “Dad, you have always just been a big bullshitter…a liar, all those wild stories you told…no one ever believed any of that crap.”  But by the end of the movie, you knew that all the stories were true…the father had just embellished a little and added some color to make them more interesting…just like Landon’s Grandpa…Arden Hambly.

Another source that I have drawn from…for motivation and inspiration has been Mitch Albom’s book, “The Five People You Meet in Heaven.”  Albom’s book (fictional) deals with our day-to-day interactions with others…and how we, and those we cross paths with, are influenced and/or affected by life’s random encounters.  We are all part of the human race and as such…our every action has a ripple consequence for someone…good…bad…or whatever.  I have written and will continue to write about interesting people whom I have met and/or others whom I expect to meet.  The book says that we will meet certain people in our life that will profoundly affect our long-term destination…and I don’t want to miss any of those opportunities or the results of the encounters.

Trying to reconstruct my childhood, while writing about a period in my life that I had always put behind me was difficult at first.  But with each story (letter), the task became increasingly less arduous and more of an insightful regression into “another time…another place.”  With each Friday’s mailing came new…and previously forgotten memories from my past…some good…some not so good…and some, I don’t know when I’ll be able to put into words.

A few months into my epistolary relationship with Landon, it became apparent (to me) that the original purpose of our writing was evolving into something more…

The words contained within the covers of this book are intended to speak to some of life’s ups and downs.  Life encompasses a multitude of components that require daily maintenance and/or management…and your judgment in those areas will drive the direction of your existence.  Life will, sooner or later, introduce you to the good, the bad, the ugly and everything in-between…humor, joy, sadness and the always-present mystery.  The author believes the words in this book to be universal…although not universally spoken nor acknowledged.

Richard’s odyssey has been continuous from the denial of his rural Arkansas roots to his acceptance in “Phase Three.”  While the Greyhound bus physically transported him away from his disdain…and provided the escape from his dysfunctional family, the relocation only skewed his perspective.  California was a world apart from Arkansas, and without an education and/or a craft…life would severely test the author’s fortitude and determination.  It would resemble a scavenger hunt as he chased his always-moving, always-fading demons for personal understanding.

This book began simply enough as letters to his son (the second of two from the author’s second marriage) who was/is also seeking self-understanding.  The son was serving prison time for drug usage and drug-related crimes stemming from twenty years of abuse.  Added to that, his son, Landon, is afflicted with epilepsy and the combination (epilepsy and heroin) can produce deadly consequences.

His son’s first letter not only requested that his father correspond with him, but that he fill in the gaps of his life…his words were, “Dad, I know nothing of you before our family.”  The father was taken aback…he had rarely, if ever, thought about his past life…much less verbalized it to others.  Initially, as he reflected on the request, he wondered if he even remembered anything about his past…or had he buried it so deeply (through denial) that he would never be able to resurrect the information that his son was requesting.

The book chronicles the author’s early years in Arkansas and his own drug abuse during his twenties as he struggled in California.  The book reveals the author’s insecurities regarding his lack of a formal education.  How he created a façade to conceal his perceived deficiencies as he managed a challenging career (the majority of those years at the supervisory level) within the oil industry.

One cannot read just one of the letters, encapsulated between the “Foreword” and “the last page…,” and fully comprehend the purpose and/or intent of this collaboration between the writer’s present life and his long-buried past.  Singularly, none of the enclosed correspondence is capable of standing alone…but linked together, they provide a measure of insightfulness and understanding (you decide about what).  There are common threads woven throughout the writing…and there are also subliminal messages, advice, thoughts, insight, understanding, encouragements and reconciliation embedded within the dynamics of this endeavor.

From the author:  Landon and I have come a long way with our burdens; and while neither of us have arrived yet…I believe we are both on the correct path and approaching the other side.  But only time will tell…

One should never equate education and/or intelligence to wisdom…

Richard was born in Hope, Arkansas (Bill Clinton’s boyhood home), in 1941 and his father was gone prior to Richard turning two years old.  He never knew the man, but attended his funeral as a sixteen-year-old.

Before boarding a Greyhound bus for California, at seventeen, Richard knew two stepfathers and a number of others who were just passing through.  During those teen years, before succumbing to the beckoning allure of the outside world, Richard worked at an assortment of low-paying jobs.  Summers were spent in the fields…picking cotton and/or watermelons and baling hay.  He also worked as a plumber’s helper and a carhop at the local drive-in burger stand.

After dropping out of school, eloping and landing in California, he soon realized how far out of his element he had ventured.  And without the guidance of his “Constant Companion,” Richard would have spent a lifetime floundering in a sea of ignorance and ineptness…and this book would not exist.