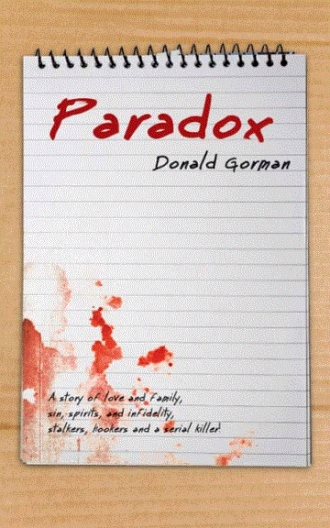 “Say something!” he warned.  “What’s the matter with you?”

Then, he gasped.  In this insufficient light, it was suddenly obvious that the shadow-man was holding a gun.

The shadow-man took a step toward him.

He took another step back.  “Why don’t you put that thing away?” he suggested.  “There’s no need for any of this.”

He began to tremble as the shadow-man pointed the gun squarely at the middle of his chest.

“Come on!” he coaxed nervously.  “Joke’s over!  Cut it out!  Who are you?  Are you that guy Lindsay keeps talking about?  What his name?  Danny Stark?”

There was a silencer on the gun.  It hardly made a sound as the silhouette fired two shots.  His target stumbled back against the brick wall as the bullets sunk deep into the ribs near his heart.

He dropped the keys in his hand.  He slid down into another shallow puddle.  He was in pain.  His chest was bleeding.

Even from his vulnerable position, he still couldn’t see a face in that silhouette as it stood over him.  He looked up from the puddle.  The one light from the building next door made it look as if the silhouette had a halo.

There was no face.  But there was a halo.

The damp drizzle kept everything in a haze.  And as he looked up from the puddle, something else made him gasp.  He didn’t know if it was the haze, the blood or the pain.

Maybe it was the alcohol.

But somehow, it appeared as though horns had grown out of the silhouette’s head!  Just like The Devil!  It sent a cold chill up his spine.

The shadow-man still said nothing.  He just aimed the gun right at his target’s face.

This is Gorman's darkest and most powerfully human novel to date.  He intentionally neglects to name the city that serves as the setting for this disturbing tale of a man who is trying to rid the streets of sin.  The man sees himself as an agent of God.  But the cops view him as a vicious serial killer.  He thinks he is haunted by spirits, mostly those of his victims.  And these ghosts claim to represent either God or Satan as they encourage him to continue his murder spree.  The story also focuses on a dysfunctional family.  For some reason, the killer is always near as they try to sort out their many problems.

Donald Gorman was born on September 25, 1961 in Albany, NY.  He grew up in the nearby small town of East Greenbush and graduated Columbia High School in 1979.  He briefly attended college and now works for The State of NY in Albany.  His love of the horror genre started in school while watching slasher movies.  He's a big fan of Freddie Kruger and other violent icons of the cinema.  He has been heard to say that he finds the blinding, graphic, gratuitous violence and carnage soothing and relaxing.  Nothing calms him down after a hard day better than watching brutal, vicious murder and torture.  To see all of his other books available through Author House, check out his website at www.wrongfulsecrets.com.