The Waters of Satan's Creek 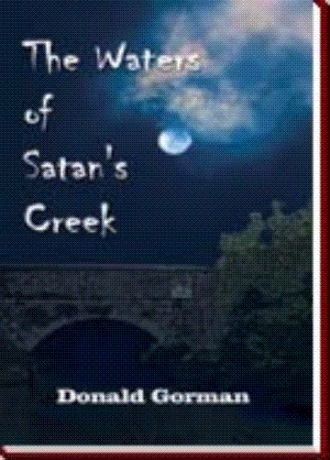 She was still hopelessly transfixed. That was the only thing that the spectators could see . . .

The transformation eventually stopped. The evil mass had chosen a solid form. It had changed into . . . a shovel.

For some reason, this simple gardening tool caused her to shriek at a level that drowned out the crowd. Then, she found the courage to run.

She raced away from the field. The cries from the ghastly bleachers melted behind her. She maintained her frantic course. She sped willfully toward the immediate nightfall.

It came without fanfare. It struck like an indigo cobra in the pit of your deepest fear.

The dense trees offered an eerie portrait of motionless decay. The unpaved trail yielded to her every step.

She quickly encountered the shovel from home plate planted deeply into a fresh upheaval of soil. She walked over and examined the alarming sight.

She knew that she had to dig. However, she wanted no part of the terrible shovel. She fell to her knees and buried her hands in the cool, soft dirt. Fistfuls of earth were torn away during her vital search. She opened a huge gash by the side of the path within minutes.

An insidious compulsion drove her to burrow downward further and further. She relentlessly continued to scoop away mountains of gravel with her raw fingers until . . . she hit something solid. It was not a rock or a root. It was more sinister.

It was more intimidating.

She jumped to her feet. She turned and ran.

She just kept running in terror.

In fear-soaked darkness she fled.

Even as she grew breathless, she continued her panic-ridden race to escape all that waited behind her.

There was no way to guess how much time passed before she found herself gasping for air in the kitchen. She never bothered to wonder how she came to be back in her apartment. She just stood before the refrigerator. A tremor ran up her spine as she stared at it.

She reached out for the door with her filthy hand. She wished that it wouldn't be there. She prayed that she would only find food.

The handle felt chilly in her determined grasp.

She took a deep breath and yanked the door open.

Her eyes bulged at the sight of Mayor Benzig's head. It rested idly on the torn stub of its neck. Its frightful coloring and vacant stare were just as she remembered. Icy vapors drifted aimlessly around it like a fog. They added an accusatory tint to His Honor's steadfast expression.

Her scream seemed distant. It was not frozen in place with her.

Before she could react further, the mayor's skin began to liquefy. Beads of flesh rolled down his cheeks like blood

from a wound. The face was transforming.

Lloyd Dooley is a crusty, aging businessman. He has a crush on a young waitress named Pamela. Without thinking, he drags his associate, Ray into the middle of his obsession. The two men soon learn that the waitress shares a dark secret with her sister, Debbie. Now, Lloyd and Ray must uncover the truth that lies beneath the deadly mysteries that burden the troubled girls. Their very lives may be at stake!

Is there a connection between the voices that Pamela hears and the voices that whisper in the dark? And, what ties do the girls have to the nearby forest that everyone fears-- a place that local legend refers to as Satan’s Creek?

Donald Gorman was born on September 25, 1961 in Albany, NY. He grew up in the nearby small town of East Greenbush.

A nearly-fatal disease during infancy left the right side of his body partially paralyzed. He graduated from Columbia High School in 1979. Although he attended a few local colleges, he never earned a degree. His travels have been mainly confined to the northeastern United States, though he has been as far north as Montreal, Canada. He worked for a while in Cape Cod and has been as far west as Milwaukee and Chicago. Currently, he lives in upstate New York and works for the State in Albany.