A Cookbook for Killers 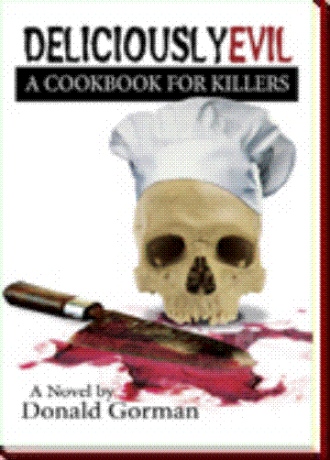 The lights had been turned on a minute earlier.  The voice on the intercom had ordered everyone to wake up.  They would all be herded off to breakfast soon.

He had been sitting on a rickety cot for the past hour.  The standard prison bedding had been broken for quite a while.  He’d had to beg forever for that cot.

The circles under his eyes betrayed his lack of sleep.  His unshaven face was pale and gaunt.  His long, stringy hair was tied back.

And, he couldn’t stop shaking.

He could feel the presence in his tiny cell.  Nobody was there.  Still, he could feel it.

He couldn’t see it.  But, there was something else in the cell with him!

Something that wasn’t moving or breathing.  But, it was there!

It was watching him!

He glanced anxiously about in his cramped quarters.  Then, he stared at the door.

Did he see it?  Did something move?

Then, he heard a footstep by the cot.

He stared at the pillow and the rumpled sheets.  Something was there.

Suddenly, the whole cot slowly began to rise up off the floor.

His eyes grew wild as he gawked at the cot floating in the air.  It was nearly a foot off the ground, but nobody was near it.  It had levitated on its own.

He shuddered as he stared.  The cot just floated a foot in the air.

Then, he thought he saw something.  It was just for a moment or two.  It was just a dark shape on the bed.  He couldn’t describe it.  It wasn’t an object.

It was more like a shadow.  Just for a moment.

Then, it was gone.

A few seconds later, the cot came crashing to the floor with a loud thud.

He gasped in fright.

Then, the cot began to rise and fall, rise and fall in rapid succession.  Each time it hit the floor, it slammed with a loud bang.

It kept banging against the floor again and again.

He shrieked in terror.  But, the cot kept banging against the floor.

A voice from a nearby cell demanded, “Hey!

Alan Glass is an aspiring young attorney.  He faces the unenviable task of defending a man named Jason Chavelle.  Jason was a member of a once famous ‘80s Heavy Metal band called Werewolf Mermaid.  Because of his questionable past, he is now a major suspect in the brutal murder of his ex-wife.  Despite the perfect alibi, Glass understands why the police are watching his client….especially when mysterious events and deaths continue to surround him.  Still, he does his best to represent the aging rock star, even when things turn dangerous!

To make matters worse, everything seems to revolve around the release of Chavelle’s new celebrity cookbook.  Nobody believes his claims that an evil spirit is responsible for the killings.  However, he maintains his innocence while pressing on with his latest business venture.  After all, what could be more harmless than publishing a cookbook?

Donald Gorman was born in on .  He grew up in the nearby town of .  A nearly fatal disease during infancy left the right side of his body partially paralyzed.  He graduated from in 1979 and attended a few colleges shortly thereafter.  He now works for The State and resides in upstate NY.

His hobbies include music and writing.  He plays the piano (left-handed, of course), and enjoys writing and reading.  His love of the horror genre started while watching movies in the seventies.  His first four horror novels: “The Brick Mirror”, “The Waters of Satan’s Creek”, “Macabre Astrology” and “A Grave in Autumn” are all great examples of his work.  And, I’m sure he plans to keep writing.