A Grave in Autumn 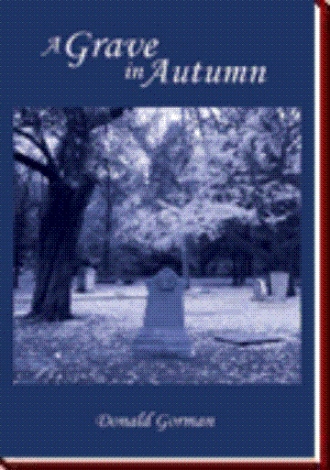 With trepidation, she climbed the once impressive stairwell to the main entrance.  She clutched the unstable, ornate banister for balance.  It creaked as loudly as the stairs, as she set one foot after another up one step at a time . . . nearing the front door with mounting fear.

Reaching the landing did nothing to calm her nerves.  In all her fifty years of existence, she had heard of this house.  However, she had never really seen it.  She certainly had never been inside the gate.  And here she was face to face with the entrance.  The door was slightly ajar.  Beyond it lie a world that every resident of Autumn had dreamt of seeing . . . but, so few had actually seen.

Curiosity gave her the strength to continue.  The thought of a large commission also made it easier to set aside her growing anxiety.  She rang the doorbell.  She could hear it echo inside.  The door was not open enough that she could see in.  She waited a few seconds, then tried again.  She listened to the echo of the bell.

Still, she got no answer.

When she used the door knocker, the door squeaked open a bit.  She didn''t want to be impolite.  But, she had dropped everything and rushed over here.  She deserved a reply.

She pushed the door open.  "Hello?" she called.  She rang the bell again.

She stepped warily through the door.  She glanced around as she called, "Hello?  This is Sharon Kellerman.  I believe you sent for me."

There was still no response.  She took a few more anxious steps into the house.  She grimaced as she saw the filthy condition of the opulent main room.  "My God," she muttered to herself.  "This is disgusting!"

She glanced over at the fireplace.  Then, she looked over at the great staircase.  It appeared to be rickety and covered in grime.  "Hello?" she called again.  "This is Sharon Kellerman.  Mr. Van Pouck?"

She took a few more steps into the room.  She was becoming a little more fearful.  She wasn''t sure which name to call for.  Cooperation and delicacy were necessary.  She tried, "Mr. Van Pouck?  Mr. Elliott?  Is anyone home?"

She took another cautious step inside.

Then, she heard the door slam shut behind her.  It was followed by a click, as if the door had locked.  She gasped as she leapt in fright.  She spun around.  The door had definitely been closed.  However, no one was in sight.

She wanted to escape.  Suddenly, a figure appeared out of nowhere.  It was the shadowy shape of a man.  However, half of his head seemed to be missing.

She screamed in terror.

Without thinking, she turned and ran deeper into the mansion.  As she entered the next room, she spun around.  She slammed the door closed.  She leaned against it as she frantically looked around for a barricade.  Nothing was available.

So, she turned and ran further into the house.  Her eyes were wide with horror and confusion.  Her heart beat with a thunderous fear.  She already had no idea where she was.  An instinctive panic motivated her to bolt across the room.  She didn''t take the time to glance around.  She just ran.

However, she was brought to a sudden halt.  A woman stepped into the doorway just fifteen feet in front of her.&

Russell Wilburn moves to a seemingly quiet small town to start a new life. >He buys a house that appears to be the ideal setting to begin this new venture. Unfortunately, strange things begin to happen. Mysterious phone calls and ghostly visions lead him to believe the house is haunted. He quickly develops a fascination with an old mansion a few blocks away, and a cemetery further up the road. It doesn''t take long to discover that the mansion is inhabited by a crazy old man who is the only living descendant of a once rich and powerful family. Everyone in town knows the horrific legend of the mansion. Everybody knows of the tales that tie the mansion and the cemetery to Russell''s new house. On the surface, no one admits these places are really haunted. However, everyone is still afraid of them. The notorious spot in the cemetery is considered a children’s story of a grave that doesn''t exist. Still, he must go there to answer the questions that will rid his home of its supernatural inhabitants. He must brave the infamous cemetery and the haunted mansion (with its deadly resident) in order to save himself from the unwanted guests in his new home. There is only one person who is willing to aid in his fight to save his house and survive! Unfortunately, that person is already dead!