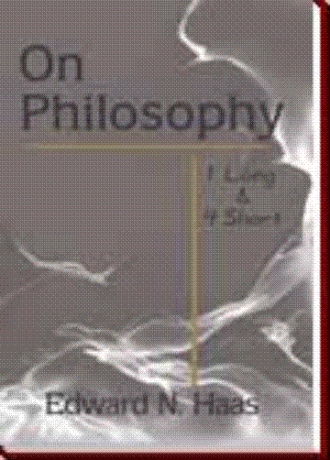 A three foot high tripod is nearby and, atop that tripod, is a camera pointed at the light bulb. This is a very unusual camera, because it has two lenses and two shutters. As with most cameras, there is a lens on the outside of the camera and, behind that outer lens, is a shutter. We can call it the outer shutter. By opening and closing, that outer shutter allows light to enter the camera and to expose the film behind the shutter. Oddly, there is another lens inside the camera. This second and inner lens is located behind, and facing, the film. Naturally, there is a second shutter behind that inner lens. We can call it the inner shutter.

Watching the camera, we notice this: Whenever the light bulb is on, the outer shutter is open, and, whenever the light bulb is off, the outer shutter is closed. In other words, the bulb and the outer shutter are perfectly in sync with one another. At least, that’s the way it is for a while. Precisely how long does that while last? In response, all we can say for now is this: It lasts for as long as it takes for the bulb to shine 1094 successive times. As you can readily calculate, if the bulb shines 20 times a second, it will take roughly 1093 seconds for the bulb to shine 1094 successive times.

Now comes a crucial point: All while the observer is experiencing the film, nothing on that film changes. By the same token, nothing inside the observer himself changes (i.e.: all the internal characteristics of his current act of existence remain fixed, because he is performing the same, one act throughout the course of the current cycle phase). Because nothing¾ either within himself or within his field of sensory experience¾ changes one iota throughout the course of the cycle phase, the observer has no way to determine the duration of that cycle phase. Of necessity, then, the duration of that cycle phase¾ as far as his experience of it can tell him¾ is ZERO. Though, from the standpoint of the flashing bulb, the cycle phase lasts 1094 successive flashes, the soul "feels" that cycle phase as nothing more than a durationless instant. The same can be said of that other half of the cycle during which the soul¾ because the inner shutter is closed¾ is aware of nothing whatsoever: It, too, is¾ from the standpoint of the soul’s experience of it¾ a durationless instant. Therefore, though a full cycle lasts 1094 + 1094 successive flashes by the light bulb, the full cycle has no duration whatsoever as far as the observer’s awareness of it is concerned. Just as deep sleep makes hours go by in a flash, so does the lack of change in each half of the inner shutter’s cycle make eons go by in a flash.

Still, each cycle leaves an impression upon the observer’s memory and upon the internality of his soul itself. Then too, each successive experience of the film is slightly different from the previous one. As a result, the observer is aware that changes are piling up in himself and¾ since, for his way of experiencing things, only durationless instants intervene between each change in himself¾ those changes are piling up in him rather rapidly. Indeed, since he automatically projects onto those changes the continuity of his own acts of existence (a continuity which is there because, however long a given act lasts, the passage from one act to the next is instantaneous and, however different from the previous act, each act remains an act of the same one soul), those changes are experienced as being continuous as well as rapid. Nevertheless, no matter how continuous and rapid the changes in his self and sense images might seem to the observer (i.e.: no matter how continuously and rapidly either the film in front of him or the acts of his own soul might seem to the observer to be changing), those changes are astronomically far from being either continuous or rapid. Be that as it may, the relentless piling up of memories of past differences produces what we can perhaps call an awareness of created time. By that I mean, a kind of time which, instead of measuring how long a given act endures, measures nothing more than the rate at which ch

There are professional philosophers and there are amateur ones. They are, in most cases, very different from one another.

Amateur philosophers, if they have college degrees, have them in some other field. They rarely if ever read philosophy journals. For them, philosophy is a kind of recreational vehicle to which they turn because, being thinking individuals, they delight in reflecting upon several of the highly interesting questions raised in some classical books they have read or provocative conversations they have enjoyed.

Because this book is written by an amateur philosopher, it is not likely professional philosophers will find anything appealing in it. Possibly, it shall appeal to amateur philosophers interested in hearing what a sixty-five year old member of their group has to say on such diverse issues as knowledge, concepts, certitude, "the unknowable," the scientific versus the philosophical method of searching for ultimate realities, relativity, time, space, matter, Zeno of Elea’s bit about Achilles and the tortoise, and paradoxical statements such as: "This statement is not true."

To be sure, because amateurs are self-educated, it is difficult for them to avoid using terminology of their own making, and that necessarily means the amateur is all too often in the awkward position of speaking a tongue known to no one but himself. Curiously, though, those interested in something "off the beaten path" generally find that situation more of an exciting challenge than they do a barrier not worth surmounting. In this, as in every book written by this author, those interested in something off the beaten path will find exactly what they crave.