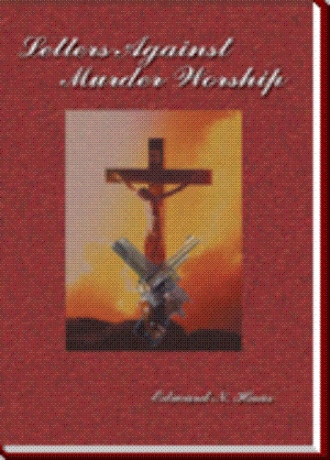 I see there is no limit to your duplicity--no limit to the brazenness with which you are willing to throw it into the face of the whole world. Listening to the 5:30 P. M. (C. D. T.) network news this past Wednesday (Oct. 26), I had to shake my head in disbelief. There you were, standing before the television cameras of the world gathered for the signing of the Jordan-Israel peace treaty. In a remark directed at Syria, you declaimed self-righteously: "We cannot . . . . We will not! . . . . support the killing of innocent civilians."

How dare you, sir, think even for a second that you have even a shadow of a right to take the moral high ground and to preach down to people like Hafez El Assad? Or have you most conveniently forgotten what you support here at home: In that case, let me remind you that ONE AND A HALF MILLION babies a YEAR are ceremoniously executed in this country with the FULL FLEDGED SUPPORT of YOUR administration.

What then? Will you try to use the favorite "cop-out"? Will you try to say the baby in the womb is not a human being? Come, come, sir! Have you been living in a cave? Whether federal, state, or local, several courts have already ruled the baby is a human being from conception. Indeed, in some states, those who, in assaulting the mother, cause the death of her intrauterine child can be charged with murder. Furthermore, sir, survey after survey has shown that most Americans consider the fetus a human being--if not from conception then, at least, after three months.

No, sir! Your recourse to that nonsense about the "non-human baby" will not save you. It is all too clear what you, your administration, and most Americans really believe--namely: THERE IS INDEED ONE circumstance under which we CAN and WILL SUPPORT THE KILLING OF INNOCENT CIVILIANS, and that one circumstance is this: whenever it’s the only way the pregnant female can defend her right to control her own body.

Well, sir, let me assure you of one thing: If something as local as one person’s concern for control over her own body gives her every right to hire a doctor to decapitate an innocent baby, then something as global as a government’s concern for the survival of its entire people gives it the right to kill whatever necessary number of innocent civilians. Neither you, sir, nor anyone else--whether as a private individual or as a government official of whatever level--can set one’s own self up as the only party with the right to define those circumstances under which one can and will support the killing of innocent civilians.

I strongly suspect, sir, people like Hafez El Assad were laughing up their sleeves at you and sneering: "Listen to this fool! He stands there with his foot so firmly and openly planted in his mouth that it is not even remotely possible for anyone to miss it. For all of that, he does."

Unfortunately, we all know what pledges of allegiance to The Constitution are worth these days. On Monday, the 9th of May, 1994, ABC TV ran an installment of "Day One" in which the media did not flinch as it assured us: "The Constitution is a luxury we cannot afford." Some of us expected an uproar of monumental proportions. To this day, though, I’ve heard no thunderous cry of indignation or protest. Whether politicians or voters, for the great majority of "Americans", the silence is merely their way of agreeing it’s time to get rid of what they all now regard as nothing more than an outdated collection of practically worthless platitudes. When their nation falls, let not such people wonder why.

We humans exhibit a most amazing proficiency in the skill of rationalizing our acts, beliefs, desires, and so forth. We are so proficient at it, that even those who seem mentally inferior in the extreme can--when accused of wrongdoing--stun you when you witness how rapidly and easily they produce intricate and compelling excuses able to transform even the most heinous of deeds into acts of august merit. No matter how incapable of avoiding even the deepest depths of poverty and illiteracy, virtually every human being’s ability to defend the integrity of his or her ego reaches the pinnacle of success very early in life. This ability never recedes from that pinnacle no matter how long life may last.

That capacity is particularly stunning when it comes to rationalizing direct assaults upon the life of what is known, or reasonably suspected to be, an innocent human being. Wherever abortion, euthanasia, and the deliberate slaughter of non-combatants in warfare promise a quick solution to pressing problems, most people can easily produce "iron-clad" arguments "proving" the seemingly murderous solution is actually "love", "the most moral thing ever done", "an ambition of the highest and noblest kind which ever perhaps existed", or some other such awesome thing. It’s commonly called using the end to "justify" the means.

But, when you use an august end to justify the means, you attribute to the means a sublime utility, and, thereby, necessarily deify it. Therefore, when you say that directly killing the innocent can sometimes serve such exalted goals as "love", "the most moral thing every done", and "an ambition of the highest and noblest kind which ever perhaps existed", you attribute to murder a utility so exalted, you necessarily worship murder whether or not you intend to do so.

In the letters, which comprise this book, the author is repeatedly hammering away at this business of rationalizing abortion, euthanasia, and the targeting of non-combatants in warfare. He is repeatedly trying to show that to attribute sublime utility to these three forms of murder is a kind of mental illness, which must eventually have exceedingly tragic consequences for all who nurture that mental illness within themselves. Above all, he tries to warn the "murder worshippers" of the one eternal consequence of their action--namely this: In death’s all-revealing light, they shall behold for a fact that their tactic was indeed--by God’s eternal standards!--nothing more than a diabolical attempt to worship murder. Seeing that, they will not fail to hurl themselves into hell in an unbelievably fanatical and hate-filled attempt to curse God forever. And for what?! Because His Infinitely Informed Truth dares to defame that greatly what they spent their whole lives insisting was something of Sublime Utility!