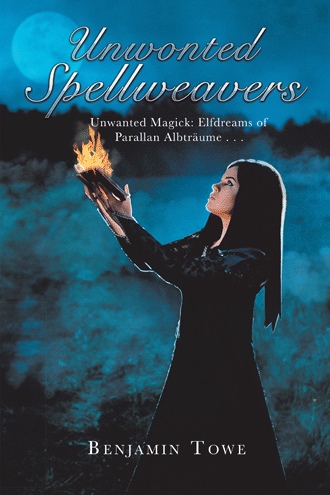 A lumbering giant kicked a loose stone. The stone flew across the corridor and struck Ubough’s finely made tunic. The giant’s keen senses detected the soft sound. The beast towered thrice Ubough’s height, grasped an ugly thick broad blade, turned its hideous head rapidly from side to side, and sniffed the corridor’s stale air. Perhaps the stench of the flowing ichors of the giant’s wounded comrades covered Ubough’s scent. Ubough clutched the black rod. The giant detected him and menacingly advanced. There was nothing for it. Ubough extended the black rod and uttered “frank land pierce,” the phrase imbedded in his memory but never before spoken. The darkness of the corridor obscured most of the Death Spell’s aura. The giant’s heart stopped and the hulking creature fell. Ubough moved quickly ahead. Lightchangers augmented his vision and he detected an opening in the opposite side of the twenty paces wide hallway. The corridor was at least the height of four Vydaelians stacked atop one another… a little taller than the giants. Ubough rushed past the large body of the fallen giant and heard movement ahead. Quickly he dashed into the opening. Overwhelming stench disgusted him. Three giants dashed past him. Ubough was in a twenty-by-twenty pace chamber, which was evidently a storage area for the carcasses of victims of the giants that had not yet graced the big beasts’ tables. The three giants rushed to their fallen comrade. The most adorned of the three quickly turned and rushed to the opening of Ubough’s hiding place. The Vydaelian squeezed between the carcass of a cave deer and a partially eaten stone eel. Convinced the grotto was clear of enemies, the massive beast returned to his mates. Ubough clutched the rod, which was more a lifeline with each passing moment and concentrated. The rod emitted an imperceptible black mauve aura and activated Comprehend Languages. Ubough now understood the giants’ guttural language. “Not a mark on ‘im!” said the giant that crouched over the body of the fallen giant. “I told Gruggle he was too old to fight Draiths. He should have stayed with the females,” growled the giant who had checked Ubough’s hiding place. “Fenytek, you know as well as I do that King Krable has pressed everyone into service. In case you didn’t notice, we just got our butts kicked out there!” the third giant muttered. “Topmacks! You blowhard! We might have fared better had you fomented a better plan! They baited us! And we fell for it! You ordered us to charge into three of ‘em! Thirty others were just waitin’!” the kneeling giant growled. “If I wanted your opinion, I would give it to you, Tegrah Tall! Your name belies your deeds. It’s only the luck of having tall parents that makes you a half a finger taller than anyone else. You should have been called the teller of tall tales,” Fenytek growled. Tegrah the Tall harrumphed, “I’m glad it’s you, Fenytek, and not I, who must inform King Krable of this debacle. With old Gruggle’s demise, we’ve now lost eight on this foray! You jest at my height, but were you not old Krable’s spawn, you’d not be in command.” The third giant Topmacks raised a thick furry sixth finger, shushed his quarreling comrades, and said, “We may have been followed!” The commander Fenytek chided, “You old fool! You are older than this pile of rubbish lying before us! Draiths can’t descend into the depths. They can’t see in the dark. Their torches can’t reach these depths! As far as our ‘debacle’ goes, I have learned the location of their females and young. Yes, we lost a few comrades, but we learned much in return. So Krable, my father, will laud my efforts. Now, if both of you will grovel before me, I’ll forgive your impudence and impotence in battle. I might even give you a bigger ration of ale. You may start begging now.”

Drelvish Spellweavers are born during approximations of the Gray Sun Andreas. The gifts of Andreas to the People of the Forest, the ancient spell book, replicates at a Spellweaver’s birth. Rarely Grayness bequeaths Magick to a diverse lot, unwonted Spellweavers, who are not Drelvish, dwell in other realms, and connected to Drelvedom by wisps of Magick and threads of fate. Magick oft comes at high cost. Sometimes the unwonted gifts of Grayness are also unwanted. Albträume . . .

Benjamin Towe has practiced Family Medicine for 30 years. An avid Dungeons and Dragons player in the 1980’s, the Old Dungeon Master “Doctor T” enjoys reading and writing science fiction and fantasy novels. The Donothor and Parallan series are “Doctor T’s” prescriptions for a different kind of Sci-Fi/ fantasy. Ben is a dedicated Whovian and lover of all things magic. Ben Towe grew up in Carroll County, Virginia. He graduated from Mt.Airy (NC) High School in 1968, Davidson College in 1972, and the University of Virginia School of Medicine in 1976. He served five years in the US Army Medical Corps. Ben has been married to Libby Dawson since 1973. Libby and Ben have three daughters and three grandchildren. Unwonted Spellweavers, Unwanted Magick is the twelfth volume of the Donothor and Elfdreams series.