The Death of Magick

A Trilogy of the Land of Donothor: Part Three 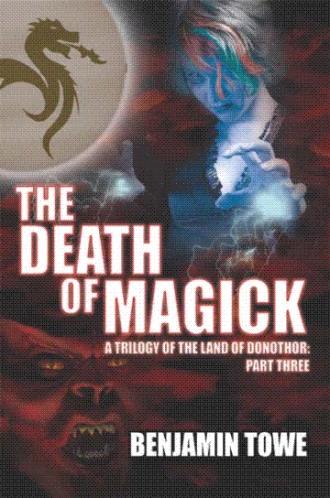 Tigarn said, "It is my wish that the etchings of the four parchments be made fact; that all powers and forces of Magick of this and every time and place be brought into play to secure my desires; that- upon my death- my greatest treasure, the Death of Magick, be transported to the blue room- the deepest level of my beloved Thirttene; that the way to Thirttene only be found if one barren of Magick imbibes the Locating Potion I've created for the Death of Magick; that the door of Thirttene be locked at the time of my death to all but the Gate Key- the greatest key of Magick; that the Death of Magick be attained only by negotiating the Thirteen Tribulatuions of Tigarn at Thirttene; and, finally, that my death be delayed and I live far beyond my generation."

Night became day in the area around Rancide.

Knarra sensed turbulence on the usually tranquil sea of Magick! Was the very fabric of Magick ripped asunder? Great power in the south...indistinct...not familiar...still disturbing! She had not felt such forces since that day at Ylysis.

At the same moment Roscoe sensed turbulence on the usually tranquil sea of Magick! Roscoe dropped a crystal phial and spilled the phial's amber contents onto the floor- a day's work lost! The rush of Magick was greater than that day at Ylysis...

In a foul lair in the Lachinor, the Banshee felt turbulence on the usually tranquil sea of Magick.

Taekora sensed turbulence on the usually tranquil sea of Magick! Awkward in her svelte feminine form in the best of circumstances, she lost her balance on the narrow stairs leading to the upper rooms at the Do Drop Inn.

The master assassin smiled. His glee was short-lived.

Tigarn didn't understand Wishes. He was an assassin- not a sorcerer- and attained surrogate use of Magick through cunning and intelligence. He already lived far beyond his generation- one hundred and fifty-seven years. The casting of a Wish drained the powers and forever weakened one empowered by Magick. The casting of a Wish demanded more of one not empowered by Magick.

The Death of Magick vanished.

The Magick of the Wish...

Within the dungeons of Red Mountain a purple glow enveloped the Chalice of Mystery.

The ancient white dragon Levimire was whisked from his lair!.

The ancient fire dragon Faranzer was whisked from his lair!

Hundreds of families were robbed of loved ones!

Items and artifacts of Magick disappeared from this world and others! Time was no barrier! Things long dead and extinct were brought into play!

The world of Donothor...many worlds changed.

The door of Thirttene slammed shut, locked, and doomed everyone within the assassin's stronghold to starvation. Frightday did not react.

Taekora fought her splitting headache, regained her balance, remained in her feminine form, approached the door to room thirteen, and smashed through the door.

The body of a very, very old man lay on the floor!

An unfortunate stalker followed the shapely form up the stairs, pursued her into room thirteen, and stealthily thrust his dagger into her back- the prismatic dragon's scales turned the blade away.

Taekora searched the body and found a small black bag on the dead man's belt. The traveler carried little else. Taekora examined the odd little bag. The bag had little weight and no aura of Magick. She was not familiar with a Bag of Concealment. Where was the assassin? Where was the great weapon? Who was the old man?

The noise attracted attention. Several men- most unsavory types- ran up the stairs and rushed into the room.

"What are you up to, pretty lady?" the insalubrious innkeeper asked.

Envision a naive young man beguiled, robbed, and ridiculed by a beautiful sorceress. Imagine the young man became the greatest assassin that ever lived. See in your mind's eye an assassin consumed by hatred of all things Magick and committed to their destruction. Visualize the creation- through the power of a Wish- of an artifact of great power to assist his quest. Picture the assassin's second Wish- a Wish for more time and a labyrinth to keep his treasure forever secure from any that might seek the artifact. Realize the consequences of the imperfect Wish- albeit difficult, a path to the assassin's treasure, the Death of Magick.

Envision the struggle across space and time between a just and powerful sorceress with rainbow tresses and a demon of timeless evil. The sorceress must seek the weapon created to bring about her destruction.The strongest and wisest of two very different worlds attempt to unravel the mysteries of ancient parchments and devise a plan to defeat the demon threatening both worlds. A new generation of Donothor and Parallan- empowered by Light, Dark, and Illusory Magick- accepts the challenge and assists their king and mentors.

What roles have a beautiful mysterious red-haired elf, the bloodline of an enemy, and an artifact of evil? Will the sacrifices of generations be for naught? If they find the Death of Magick, will the weapon destroy them before they face the demon?

Ben Towe grew up in Carroll County, Virginia. He graduated from Mt. Airy (NC) High School in 1968, Davidson College in 1972, and the University of Virginia School of Medicine in 1976. He served five years in the US Army Medical Corps and has practiced Family Medicine in the Augusta, Georgia, area since 1981. He has been married to Libby Dawson since 1973. Ben has three daughters- Heather, Mandi, and Sheri- and a son-in-law Grant. Ben enjoys fantasy novels and lists among his heroes JRR Tolkien, Carl Sagan, Gene Roddenberry, Ray Bradbury, Terry Brooks, Piers Anthony, CS Lewis, and Peter Jackson. Ben thanks his family for their love, support, and the names of dwarves and elves; his grandmother Fairy Sykes for the gift of  imagination; his Uncle Jay Towe for the love of reading; his father-in-law Garnet Dawson-"the embodiment of a good man"; and  the intrepid D&D party of the early 80's- Roy, Lib, John, Sherry, Don, Janet, Gary, Jane, and all the hirelings.