The Dawn of Magick

The First Story of Donothor 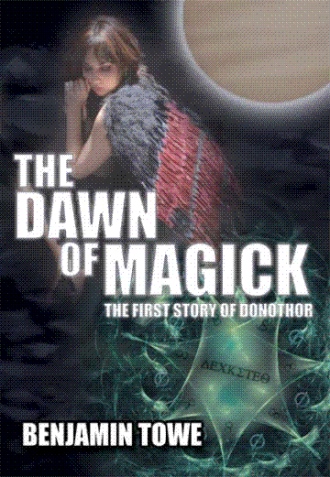 Had he tarried too long in the strange grotto?

Refreshed by his nap, Rhiann Klarje returned to the gray stone and again touched the lump of rock. This time he felt only a cold and lifeless boulder. Like ichors from a wound, red liquid steadily oozed from the two previously noted sites. The red fluid flowed from the stone, ran across the hard floor of the cavern, extended to the wall, seeped through, exited to the soil of the desert, and created the red lines in the sand. He touched the flowing red liquid. The crimson ichors were thicker… like…blood.

Rhiann heard a low-pitched rumble. Initially thinking he heard the sound of distant thunder, the sorcerer noted the rhythmic sound more closely resembled the slow heartbeat of a sleeping giant. The sound emanated from the Bloodstone and the fluid gushed from the stone with each pulse. The rolling thunderous sound intensified, reverberated against the walls of the small cavern, and augmented the flow of the red liquid.

Rhiann rubbed his fingers against his dirty vest. Taking a deep breath to steady his nerves, the sorcerer left the rock, returned to the opened chest, and peered into the little trunk.  The chest now contained the Tome of Translocation, the Travelers Tome, and fragmented dark gray eggshells. Rhiann recognized the essential material components for the spell detailed by the Translocation Tome- fragments of fossilized shypoke eggshells. The Translocation Spell certainly would become one of the greatest treasures of Sagain.

Sorcerers easily learned low-level Teleportation Spells. Teleportation not only worked over short distances but also enabled the caster to carry nothing. The caster arrived at his destination nude and defenseless, and this presented problems. Word of Return Spells only permitted returning to one’s sanctuary, though this valuable dweomer allowed some encumbrance; that is, the caster could carry some of his stuff with him! Teleportation and Word of Return enabled escape and little else.

Rhiann pondered the intricate details of the Ninth Level Translocation Spell. He had only dreamed of these most potent dweomers. Far beyond the power of most sorcerers in their lifetimes, the great dweomer had no boundaries. If the caster attempted travel beyond his own world, he faced danger. Assuring a habitable destination required refinement and amplification of the spell. Rhiann Klarje realized he could cast the great spell from memory and elected to leave the Translocation Tome at this hallowed ground. Desiring to study the stories of his dreams written in the Travelers Tome, he placed the volume within his raiment.

His eyes looked upon the jagged boulder in the middle of the area. The Bloodstone granted his new energies. Why? Was this gray rock the reason Magick emerged from the shadow of Nature?

Was the scarlet liquid the stone’s life’s blood, or merely a gift to its finder? How? Why did the gray stone grant him power? As had been true all his life, the young enchanter had few answers to his questions. At this time of uncertainty, he must keep the cavern and its treasures secret and safe from the squabbling factions of Sagain. Having learned as much as possible, Rhiann chose to leave the cavern, explore the Veldt, and confirm the writings of the tomes. Rhiann Klarje intended to become just as mysterious as Nature, Magick and the Old Ones. Perhaps to the point of paranoia, Rhiann Klarje was to be the Nameless Enchanter of Thynna, even to his friends.

After etching the details of the hallowed place in his mind, NET placed the Tome of Translocation and precious supply of the rare shypoke eggshells in the little chest and returned the vellum to the silver cylinder. After placing the Staff of Closure in his right hand, he touched the scroll tube with the staff. The sorcerer drank deeply from the Bloodstone's flowing crimson ichor.

The Dawn of Magick is the first story of Donothor. The tragic fantasy chronicles the lives and deeds of many ilks of the world Sagain. Threads of fate and Magick intertwine the doomed world of sorcery with three other worlds. When the story begins, Sagain is a pastoral mundane world dominated by preternatural beings called Old Ones. Nature's most powerful forces foment a cataclysm and kindle the flicker of Magick. The flicker grows into a blaze and creates great artifacts. The power of Magick descends along family lines. As sorcerers live longer and grow more powerful, greed and competition lead to conflict. Orders of Light and Dark Sorcery choose leaders and allies, create citadels and seven fantastic wonders, and rip Sagain and its people through their ageless conflict. Spells cast by avaricious sorcerers bring forces of evil to Sagain. This begins a conflict that stretches across space and time. Powerful spells enable the imprisonment of consummate evil and facilitate the escape of a fortunate few from the doomed world.

What is the source of Magick?

What are the powers of the thirteen and two staves?

What roles have the mysterious Old Ones, the old wanderer Confusious, Iyaca Vassi, and the Orders of Light and Dark Sorcery in the story?

Does only evil lurk behind the dark walls of Koorlost, the citadel of Dark Sorcery?

Does only good reside within the alabaster walls of the Laurels and its Tower of Radiance, the citadel of Light Sorcery?

Are dragons, the great wyrms of the skies, good or evil?

The story continues in Deathquest to Parallan, the Orb of Chalar, the Death of Magick, and the Chalice of Mystery.

Ben Towe grew up in Carroll County, Virginia. He graduated from Mt. Airy (NC) High School in 1968, Davidson College in 1972, and the University of Virginia School of Medicine in 1976. He served five years in the United States Army Medical Corps and has practiced Family Medicine in the Augusta Georgia area since 1981. Ben has been married to Libby Dawson since 1973.

The Dawn of Magick is dedicated to everyone with an imagination.