A Trilogy of the Land of Donothor: Part Two 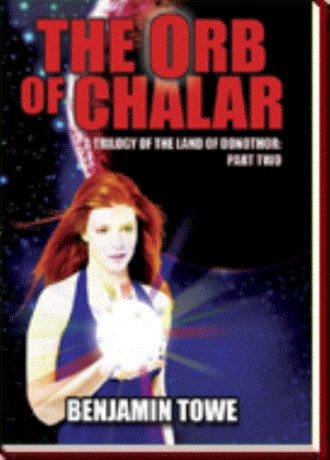 Theandra quickened her pace and within an hour was standing within sight of the walls of Ylysis. The outer curtain of the massive fortress teemed with movement. She uttered another brief incantation. She conjured up an opaque globe of shimmering spheres. The colors appeared in the order of red, orange, yellow, green, blue, indigo, and violet. The different colors flashed in a repeating pattern every heartbeat. The brilliance of the colors blinded anything in the immediate vicinity of the sphere which surrounded her. The sphere was ten paces in diameter; she could move about within the sphere and could command it to move forward. She cast another more detailed spell that required her to crush a small clay shield in her left hand as she conjured. A large translucent shield appeared and moved two paces in front of her. She began to move forward.

The guards upon the wall-walk surrounding Ylysis witnessed the formation of the Shimmering Spheres. The colors were beautiful but unnerving at the same time. The general appearance was that of a rainbow rolling toward the castle. She stopped a few hundred paces from the castle doors. There was loud recoil from the enceite, the quadrangle of Ylysis, and a huge flaming projectile raced toward her. The catapults were firing rocks molten by Magick. Theandra did not move. The first three attacks came close but were inaccurate. The commanders were adjusting the angle of their fire and the fourth projectile followed a true course. She allowed the fourth attack to crash upon her. There was a great explosion when the projectile impacted. The flames were intense; when the smoke cleared, she was standing unharmed within the Shimmering Spheres.

Theandra pointed her right hand toward the castle wall. The archers fired volleys; the range was too great. The few remaining Ogres brought their great bows into play. The huge arrows were over half the length of an elf’s body and as thick as his arm. Two of them crashed into the Magick Shield in place before her. She felt the force through the shield; she was not harmed. She continued to point toward the wall. Slowly she began to fan her outstretched fingers across a semicircle in front of her. Red hot flames erupted from her delicate fingers and fanned out before her. The flames reached the wall in a moment’s time and began to follow the path of her fingers as she traced the length of the wall. The defenders screamed as they were enveloped by the flames. Ogre, Hobgoblin, and Dark Elf were consumed. Defenders tried to duck behind the merlons, the higher parts of the battlements, as the flames approached;  there was no escaping the doom brought by the flames. She traced the entire length of the wall. The screams stopped after a few minutes.

The world of Donothor was a child feeling the pangs of growth. A just man and his family labor to unite the peoples of Donothor against beasts and lawlessness. Dark Magick of utmost power carries ancient evil to Donothor. Childhood is spoiled. Alliances of dwarves, men, gray elves, prismatic dragons and Light Sorcerers oppose the alliances of goblins, hobgoblins, ogres, giants, black dragons, dark elves, and Dark Sorcerers. An aberration of Magick creates a breach between two very different worlds. These worlds become entangled. Peoples of both worlds struggle against the forces of Dark Magick. They must face a myriad of fantastic beasts. What courses should they take? How will events in one world affect the other? Can ancient powers overcome the evil? What are the keys to victory?

Ben Towe grew up in . He graduated from Mt. Airy (NC) High School in 1968, in 1972, and the University of Virginia School of Medicine in 1976. He served in the United States Army Medical Corps from 1976 to 1981. He has practiced Family Medicine in , since 1981. He has been married to Libby Dawson since 1973, and has three daughters; Heather, Mandi, and Sheri, and a son-in-law Grant. Ben enjoys fantasy novels and lists among his heroes JRR Tolkien, Carl Sagan, Gene Roddenberry, Terry Brooks, Piers Anthony, Ray Bradbury, and Peter Jackson. Ben thanks his family for their support; Greg and Grant for their computer savvy; the intrepid D&D party of the early 80’s; Roy, Lib, Sherry, John, Janet, Don, Gary, Jane, and all the hirelings; his father-in-law Garnett Dawson for being -“the “embodiment of a good man.” Ben gives special thanks to Cecilia Ware for the cover illustration.