The Chalice Of Mystery 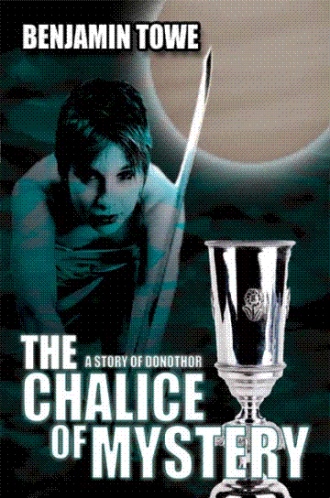 Knuth opened the door. The chamber was fifty feet deep, extended twenty feet to both sides of the door, and had a ten foot ceiling.

The faintly illuminated room was quite cool. An odd lamp bubbled on a table in the upper right corner of the room and lit the room. It emitted a reddish glow and gave the appearance of molten rock- but lava would be hot. Closer inspection revealed white stone jutted out a few inches from the peculiar table.

Roscoe found faint nonspecific emanations of Magick. Suddenly the door slammed shut behind them. Knuth found only solid wall where the door had been.

At the moment that the outer door closed, a secret door opened on the opposite wall. A shadowy creature entered the room and stood near the odd table. The beast appeared friendly, stood the height of an elf, and had the stature of a goblin. The furry little beast swayed rhythmically, pressed the ivory extensions with three of its four hands, and filled the room sounds- a repeating bass rhythm under a freely and elaborately syncopated melody.

Ravenna added, “I… I have the blues!”

It was too late. The entire party danced. It was impossible to control their weapons or effectively conjure. They heard faint pounding from the hallway- their comrades tried to reopen the portal to the room.

She shook her red hair wildly and twisted her backside in a rhythmic fashion.

“What sort of beast is this?” Brenda asked as she pirouetted.

“They are usually the life… and death of many parties. The sounds create a mass charm type effect. You can’t help but feel the power of the sounds. Wow! He really knows how to sing the ‘blues’!” Knarra said- she interrupted her comments and shook awhile.

She continued, “The boogie man isn’t dangerous alone. It’s more mischievous and fond of drink, Magick items, and ‘bling’- gaudy things. The boogie man will ally for such rewards with other creatures; its antics tire out potential adversaries. I…”

She was really getting down.

Roscoe cut a mean rug. The sorcerer tried to level his staff but misdirected the Jolt Spell- the charge glanced off the ceiling.

“What can we do about this boogie-man?” Rabe asked.

“You may as well enjoy it,” Knuth surmised. “Brenda, may I have this dance?”

“Yes, Knuth. I thought you would never ask!” Brenda answered.

It wasn’t very melodic- well, maybe to a dwarf.

They danced for an hour.

Knarra tried unsuccessfully to cast a Silence Spell upon her personage.

Knarra danced toward the boogie man, reached into her robe, removed a shiny object, and tossed the bauble into the air toward the furry beast. The little beast snatched the ring from the air with its fourth hand, placed the ring on one on the four fingers, and stopped playing Musick.

The room was briefly quiet. Then…

The boogie man transformed into a large toad and hopped around the room.

The door reappeared on the wall behind them. The rest of the group rushed into the room and found their comrades panting and fatigued.

“You don’t have an excuse now, you idiot!” Rabe cajoled.

Knarra and Roscoe tarried in the room after the others went into the passageway. The ‘cursed’ boogie man hopped away through the door it had entered. The door closed behind the unhappy hopper.

"The Chalice of Mystery" records the deeds of heroes and legends of Donothor. The chronicle occurs three hundred years after the fall of the sorcerer of the Lachinor Morlecainen and his daughter Chalar and seven centuries before the Deathquest to Parallan. The Aivendar family has wisely and justly ruled Donothor, but fantastic creatures roam the land and large areas of Donothor remained unexplored. The Light Sorceress Knarra keeps an uneasy eye toward the Iron Mountains, the imposing eastern border to the growing civilization, and the Lachinor, the great swamp to the south. Attacks by an unlikely alliance of creatures from the Iron Mountains shatter the fragile peace and terrorize Donothor. Knarra enlists the mysterious Dark Sorcerer Roscoe, the dwarves of Hillesdale, a red-haired elf, a legendary dwarfish fighter, and the Rangers of Lyndyn to battle the alliance of red giants, ice giants, ogres, two-headed Ettins, troglodytes, dragons, and stranger ilk. A relic of evil rests in the Iron Mountains. What role does the artifact play in the future of Donothor? What evil unites the denizens of the Iron Mountains?

Ben Towe grew up in Carroll County, Virginia. He graduated from Mt.Airy (NC) High School in 1968, Davidson College in 1972, and the University of Virginia School of Medicine in 1976. He served five years in the US Army Medical Corps and has practiced Family Medicine in the Augusta, Georgia, area since 1981. Ben has been married to Libby Dawson since 1973-thanks Lib! He cherishes his three daughters- Heather, Mandi, and Sheri. Ben thanks his son-in-law Grant for helping a “horse-and-buggy” man (Ben) into the world of computers. “The Chalice of Mystery” is dedicated to the intrepid D&D party of the early 80’s- Roy, John, Sherry, Janet, Don, Lib, Gary, Jane, and all the hirelings- survivors of the Red Mountain dungeon!