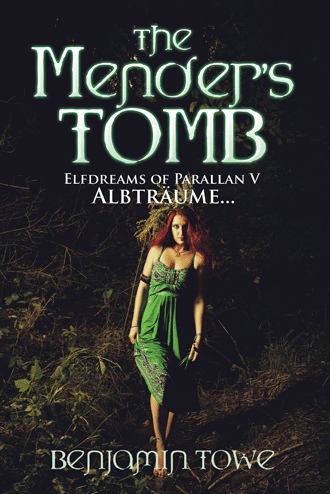 The Mender Fisher differed from others of his ilk in that he was now a bit grayish green. After he received the erstwhile Spellweaver’s amber blood, more than Fisher’s snow-white skin had changed. Fisher was a wee bit Drelvish and had vestiges of emotion, and the Mender struggled with the brief jiffs of feelings he experienced. Nothing in his years of Mender experience prepared him for feelings! Fortunately for Fisher the episodes occurred infrequently. Clouse, the product of Fisher’s confinement, was a green pointed-eared Drelvish Menderish Spellweaverish Yannuvish bloke. Clouse arrived in the world with knowledge of Mender folk, but since his emergence from the chrysalis, Clouse’s mind’s eye had not shared the visions of other Menders. Thus the green guy’s knowledge of Menders was fixed at the time of his arrival. Magick touched Clouse. He also emerged with knowledge of Spellweaver Yannuvia’s spells and content of the ancient Drelvish spell book Gifts of Andreas to the People of the Forest. Menders understood mending. Menders were Magick. Fisher addressed leaders of Lost Sons in the common area of the Drelvish splinter community. The Mender had paused for a painfully long time. Lost Sons community elder Dienas cleared his throat. Lost Spellweaver and First Wandmaker Yannuvia gently nudged Fisher. Fisher resumed his dissertation, “Ultra-rare whitish Menders are among the oldest folk of the World of the Three Suns. Given the opportunity, a Mender will heal both a warrior and the warrior’s enemy. Mender’s nature precludes haughty eyes, a lying tongue, hands that shed innocent blood, feet swift to run into mischief, deceitful witness that utters lies, and sowing discord among brethren. Menders are neither loyal nor disloyal. Menders do not display lust, gluttony, greed, sloth, wrath, envy, and pride. Likewise Menders do not show signs of chastity, temperance, charity, diligence, patience, kindness, and humility. Menders do not seek adultery, fornication, uncleanness, lasciviousness, idolatry, witchcraft, hatred, variance, emulations, wrath, strife, sedition, heresies, envying, murders, drunkenness, reveling, and such things. “My kind foregoes courtship and mating. I don’t mind. Such endeavors waste lots of energies. The approach of the gray sun heralds the time of Menders’ confinement. You might call it procreation. A protuberance develops between the base of the fifth and sixth digits of our right upper extremity and grows with each passing cycle of Meries. Successful confinement requires a dark place and potting soil. All Menders are born with some inherent knowledge of confinement, but every Mender’s experience differs. I shared the collective knowledge of my kind, but I knew little of confinement until I endured the experience. But I accomplished the deed.”

The Mender’s Tomb continues the Elfdreams series. Steadfast friends, Magick, many wands, the Mender Fisher, and improbable allies help the first Wandmaker, Yannuvia, bear his burdens, strengthen the fledgling community Vydaelia, and battle against overwhelming odds. The Wandmaker’s life mate, Morganne, struggles with her pregnancy and complex relationship with Yannuvia. Beautiful sea elf Piara also bears burdens and seeks answers to her bond with an ancestor to whom she bears remarkable resemblance and from whom she gained Menderish traits. The unpredictable Good Witch, the Dreamraider Amica, stirs the pot. The Dreamraider also carries a burden. Grayness touches the Wandmaker’s childhood friend, Kirrie, who helps the Good Witch in more ways than one. Will Yannuvia, Piara, Kirrie, and their allies find clues to unravel the mysteries of the Mender’s Tomb and discover bridges between their underworld realm and the World of the Three Suns, Donothor, ancient doomed Sagain, and the pretty blue world with its stone circles? Will fire Magick serve or undo Yannuvia and Kirrie? Escape to Elfdream! Dr. T’s Rx for fantasy are the following: Deathquest to Parallan, the Orb of Chalar, the Death of Magick, the Chalice of Mystery, the Dawn of Magick, Lost Spellweaver, First Wandmaker, Wandmaker’s Burden, Emerald Islands, and the Mender’s Tomb.

Benjamin Towe was an avid Dungeons & Dragons player in the eighties. Doctor T is a fan of classic fantasy and an avid Whovian. The old dungeon master Doctor T enjoys reading and writing science fiction and fantasy. The Donothor and Elfdreams series are Doctor T’s prescriptions for a different kind of sci-fi/fantasy. Dr. Ben grew up in Carroll County, Virginia, and graduated from Mount Airy High School (North Carolina), Davidson College, and the University of Virginia School of Medicine. He served five years in the US Army Medical Corps and now lives in Martinez, Georgia, with his wife, Libby, who has put up with his avid imagination for over forty years.