A Trilogy of the Land of Donothor: Part One 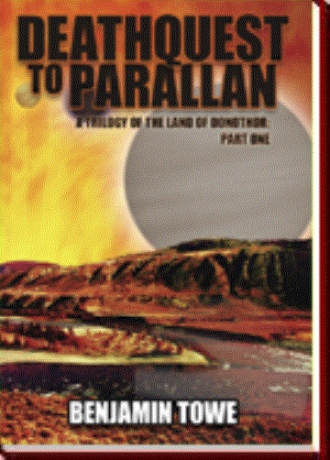 Calaiz rose from another disturbed rest period. He stretched his enormous frame and walked over to the window which looked out from the royal onto the city and the surrounding plain. The Peaks of Doom loomed ominously in the distance and the sky was filled with the reassuring amber glow produced by the conjoint efforts and lights from the three suns hovering over the land.  In the other direction, north in the reference of the instruments taken from the other world, stood the Peaks of Division.  There the reflected , the greatest of the peaks and the lair area of His greatest enemies, the Kiennites.  There would probably be no storms today and it would be a good day for the Draith Lord to show off his prowess to his people, the Masters of the Land, in the competitions in the royal arena.

For security reasons all windows in the royal tower were apparent only from the interior of the structure. From the outside, the tower appeared to be made of the solid black stone of which Castle Ooranth was built. The nature of the stone was unknown even to the builders of the fortress those centuries ago. The one-way windows enabled the leaders of the Masters of  World of Three Suns  to observe the center of their domain in relative security. The race led by the immense Calaiz referred to themselves as the Masters; many others referred to them as the Draiths. Their silent movement mimicked that of wraiths of legend of the other world..

Calaiz was indeed a massive creature. He was humanoid - no, he was diabolic - but he was diabolically handsome. His skin was like polished brass, much more lustrious than that of the majority of the Draiths. His strong face had well defined lines that revealed every minor change in the affect of the powerful being. He stood over seven feet tall, and his mass was in excess of three hundred pounds, in the measurements of the peoples of the other world. Measurement in the domain of Calaiz was not based on mere numbers, but in deeds and power..

His hair was amber and flowing, and he gave the appearance of a demi-god more

than a mortal. He also gave the appearance of an invincible foe, and he might well be for any mortal being. But Calaiz was mortal. Though he was only in his early prime, currently only forty years old, in the quantums of time of the other world, the Draith Lord knew that the time had arrived for him to undertake the steps necessary to assure the continuation of his line. Now fully awake, the massive one found his mind returning to the problem facing him - a suitable mate; a consort who was worthy of carrying his heir.

For the Draiths, the reproduction of their race was not the simple matter that it was for other peoples. The Draiths had been taught a terrible lesson about underestimating the powers of their foes those generations ago when they fell victim to the “foaling curse” of the Kiennite Deathqueen, Anactrophenia. It was the time of the last war of the four powers. As usual, it had boiled down to the Draiths against the other three - the Kiennites of the north and east, the wandering  dogfaced  Drolls of the north and central and the Giants in the extreme northern mountains. In a world of three suns direction had long been one of instinct, but excursions into the other world had brought back many items including a device that pointed direction on its dial. The adaptable Draiths had chosen to incorporate this into their teachings and archives.

A young prince struggles with his identity and role when his land and family are attacked by mysterious assailants. He must become a leader and assemble a party of the ’s strongest characters. Fighting skills, a magic sword, friends, Magicks, and unexpected allies are needed to accomplish the task before him. The quest leads the Donothorians to a new night-less world of three suns, where new allies and many enemies are found. His party becomes eyewitnesses to and participants in a great conflict. But where does the greatest evil lie? What is their role in the conflict? Is the fate of this world tied to their own? Can they succeed against impossible odds and succeed in the Deathquest to the world of three suns?

Ben Towe grew up in southwestern . He graduated from  , High School in 1968,   in 1972, and the University of Virginia School of Medicine in 1976. He served in the United States Army as a medical officer from 1976 to 1981 and has been in private practice in , since 1981. He has been married to Libby Dawson since 1973, and has three daughters, Heather, Mandi, and Sheri. Ben enjoys fantasy novels and lists among his heroes JRR Tolkien, Carl Sagan, Gene Roddenberry, Peter Jackson, and Ray Bradbury. Ben thanks his Uncle Jay Towe for his encouragement,  love of reading, and kindred spirit. Ben also thanks the intrepid Dungeons and Dragons party from the early ‘80’s: , John, Sherry, Lib, Janet, Don, and all the “hirelings”.