God Had a Breaking Point 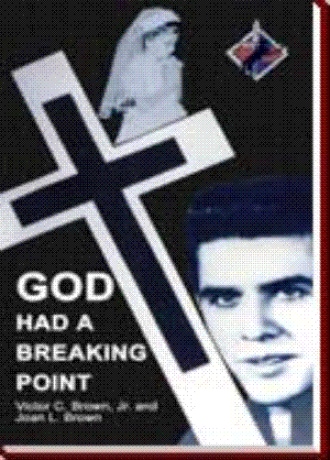 As both brothers sat, Danny went through a pack of cigarettes. Father Mahoney had his brother in a good mood, talking about football and baseball two sports in which Danny excelled at school, until a patient came up to them. Danny went back into his own world.

"Aha, see this man, Mike. He was the governor of this state. He's one of the most corrupt bastards that ever was in politics. Isn't that true, Sam?"

"Yes, I'm the governor. Anything you want, just write me a memo, I'll get a committee to look into it right away."

The man addressed the priest, "Father, will you bless me?"

"Yeah, Mike, bless him. The crazy son of a bitch has all kinds of money hidden in shoeboxes. Isn't that so, Sam?"

"Get outta here, you thieving son of a bitch."

The man resumed his pace.

"You see, Mike. You get crooked politicians even in the nut house. The ones out there in your world are worse."

"Only God has the right to judge, Danny. Not you nor I."

"Give me a gun and I'll show you how to judge."

Father Mahoney saw his brother drift further in that violent world. He stayed a few more minutes and returned to his parish.

When they returned to the station, Susie and Joe rushed into the commander's office. "Are you done already, Susie?" asked Commander Wasco.

"Almost, sir. Commander, we think we know where the next killing's going to be."

"What? What next killing?"

"Sir, can we sit down? This is going to take a few minutes."

Susie and Joe sat and for the next forty-five minutes, she engraved the whole picture into the commander's mind.

When she finished, Commander Wasco had the phone in his hand. He was arranging stake-outs around Jacki and Kimberly's houses.

"Sir, I think you might also want to stake-out St. Mary's."

Commander Wasco rose from his chair, walked toward Susie and gave her a little hug. "Susie, you and Joe are geniuses! But it's the girls he's after next. We got him by the balls. You've solved the pattern."

"Sir, the pattern is the church."

"Susie, you just told me the girls don't go to school there. How can the pattern be the church? The pattern is the next two victims."

"Susie, let us handle it now. I want you to get Detective May and go to the McCabe and Sullivan houses. Let them know what's going on."

But Susie headed toward the Lightstar apartment to begin her search. She and Joe questioned Mrs. Lightstar if Father Mahoney had been there. Mrs. Lightstar broke down and through her tears told how he was going to check on her husband. She gave Susie the addresses.

Susie and Joe followed the same trail as Mike - first to the apartment and then to the work address. As they were parking, Susie saw an ominous sign. "Joe, look, there's Father Mahoney's car."

They entered the building and found several first floor residents gathered in the hallway complaining about the putrid smell. One of them told Susie they were looking for the janitor, but his door was locked.

Susie and Joe followed the old lady down to the boiler room. The smell became stronger. The police officers took over. They stopped dead in their tracks when they saw fresh blood on the door.

Susie and Joe exchanged glances. Being good cops, their instincts told them something was wrong. They kicked in the door. They were overcome by the acrid smell coming from the open door of the boiler. Their eyes focused on the skeleton being consumed in the flames.

"Joe, turn this thing off."

"What the fuck do I look like - a janitor? I don't know nothing about boilers."

"Call in. Get some back-up and the fire department."

Susie sealed off the area. Her eyes swept the room. She noticed a black coat lying on the table. She saw a wallet on the floor. She was horror stricken when her eyes discovered a priest's blood stained collar near the boiler.

She put her hands to her face and watery eyes. She knew that burning skeleton was Father Mahoney.

Within minutes additional police and the fire department arrived. The firemen turned off the boiler, not much remained of the skeleton. Ben May headed the detectives and took over the investigation. They bagged the evidence and found one more piece: wedged in the boiler door was a gold cross.

Father Michael Mahoney, a newly assigned priest to St. Mary’s a parish near Chicago’s lakefront, is a man who gives his complete soul to the church and parishioners. But he finds God can’t control greed, sin, and the brotherhood of man. Those who love him the most are Susie Braun, a police officer with her own problems, and Danny, a mentally ill brother who suffers from the memory of war, believing that might makes right and turning the other cheek is for the week.

The reader begins to wonder if evil is better than good. The priest’s good deeds are misinterpreted causing him to question if God has the right to judge or does man?

Susie Braun follows the trail of a serial killer who’s out to get anyone who has harmed the priest. Her unorthodox and imaginative procedures earn her the respect of her fellow officers.

If God and the devil play a chess game, who would smile at the end?

-Jr. Smiled, which traces his early life,
-Jr. Part I  Men Die, Nightmares Survive, which follows him to war,
-Jr. Part II  You Can't Live Forever, in which Jr. returns to Chicago to challenge his roots,
-Jr. Lied  Perception or Deception, which finds Jr. in an unexplainable marriage, and
-Jr.'s Angel,  in which Jr's chess game comes to an end.

All my life I have played a chess game with God. I’ve come to the conclusion that I can’t win. Good and evil have always coexisted and sometimes evil has won. The bad lived and the good died. Is it because God had a breaking point?

I was raised simply as a child. I went to Catholic school, but yet the Bible confused me: Old or New Testament, which held the answers? As an adult, new philosophies were added to the mix: Might makes right, Turn the other cheek, Peace, Brotherhood, Love, and Death.