A Tribute to His Heroes

The Fifth Book In The Johnny Skull Series 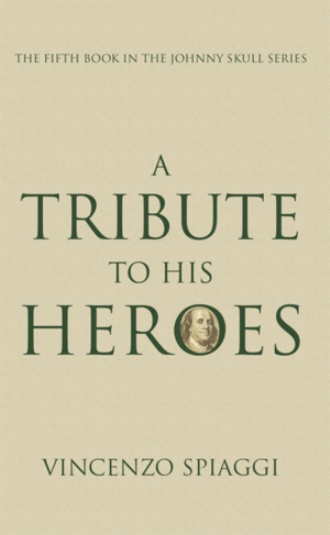 “Well, as Aunt Lucy tells the story, the legend of the special spirit dress begins with the fate of a small herd of pronghorn antelope that were disoriented by a sudden snow storm and were forced, by the storm, into a north-facing box canyon in the Black Hills, late in 1876. The winds that carried the snow into the canyon didn’t stop for five days, and the freak storm dumped more than fifteen feet of snow on top of the trapped antelope herd. The snow covered the standing herd and froze them in place. Then, bitterly cold weather set in, with temperatures that were estimated to be below zero for weeks on end.

“As the snow melted in the spring of 1877, the tops of the antelope’s heads could be seen poking through the surface of the snow, with their dead, terror-filled eyes looking straight ahead. A hunting party of Indians in the area found the frozen herd when the surface of the snow was just below their knees, and they kept watch over the huddled antelope until all the snow had completely melted, which it did rather quickly when a warm Chinook wind ascended up the canyon the next day. It was then that the antelope herd came back to life and continued their grazing. The Indians knew then that they had witnessed something quite miraculous.”

Cimmaron continued with the tale. “The Indians who saw this miracle, gently herded the antelope back to their village, and they kept them in a special corral to keep them from harm, for they knew these animals were truly blessed, coming back from the dead, and all. The miracle antelope were revered; the Indians fed them only the best corn, and they prayed and danced to them. Then, one day several months later, on the summer solstice, all the antelope died suddenly, and this time they did not come back to life.

“After the death of the miracle herd, this group of Indians formed the Antelope Clan, which was dedicated to the worship of the spirits of the now-dead, formerly resurrected, antelope. The hooves, horns and bones of the dead antelope were crushed into a magical ceremonial powder, the meat was eaten during a grand ceremonial ritual by the men who had found the herd, and the hides were made into ceremonial clothing by the women. Aunt Lucy’s special spirit dress was made from the hides of the unborn antelope that were found in the bellies of the pregnant females.

“Aunt Lucy is the oldest living member of the Antelope Clan, therefore, she is respected by all the tribes of the Indians of the Northern Plains. Truly, she has great healing powers. But, do you remember me telling you earlier that her Indian name is Five Appaloosas Lying Down?”

“Yes, I do,” said Emily, totally enraptured by Cimmaron’s story.

At the end of the previous book in The Johnny Skull Series – “The Great Sicilian Rabbit Hunter” – Johnny discovers a fortune in gold and cash in an abandoned coal mine. He then proceeds to give many of his friends a gift of $20,000, but he remains the anonymous gift giver. “A Tribute To His Heroes” – the fifth in The Johnny Skull Series – follows the recipients of the gifts and how their new wealth affects their lives. Returning to the story line are many of the characters from the previous four books of the series, including Emily and Cimmaron, Rocky, Diego, Trudie and Marlie, Sheriff Webb, Helga, Sarah and Vanessa, Richie, Omaline, Saundra and Jenny, Greta, and Xerxes, the Persian. New characters include an ex-Marine and an undercover Israeli operative. A sub-plot of the story is the murder of a radical Muslim cleric, how that murder intertwines the lives of several of the characters, and the international intrigue that builds upon that incident. * * * “Reading this book was like taking a trip down memory lane and visiting old friends. The Johnny Skull Series just keeps getting better and better.” – Jack Paige, Ph.D., Literary Consultant