The Fourth Book in the Johnny Skull Series 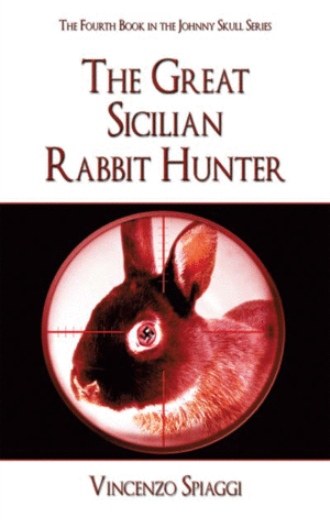 The young boy was returning home from hunting rabbits. He was a very good hunter for being just ten years old. Over one shoulder he carried his long, lever-action rifle that was as long as he was tall, and over the other shoulder he carried seven furry carcasses on a rope. He was proud of himself, and he loved the way his mother cooked rabbit. It was his favorite food, and he was happy that he could help feed the family. And, as many rabbits as there were in western Sicily, he knew he would never go hungry. But the boy also had a caring heart, and he always gave at least one or two of his rabbits to the nuns at the village church, or to a needy neighbor family down the road.

As he climbed up the steep embankment from the creek bottom, he thought he heard an unfriendly ruckus coming from the barnyard. Quietly, he climbed the barn’s back stairs up to the loft. When he peeked out through the hay door, he saw an old truck parked in front of the gate to the cow pen. He recognized the truck as one owned by the local Mafia chieftain from the village down the road, and he remembered his father telling him that very morning that he’d heard that some German soldiers had stolen the truck. Apparently, the soldiers were stragglers left over from the war that had just ended, and they were on their way to Palermo to catch a boat north. Two German soldiers were leaning against the truck, they were laughing and they were drunk.

They came to the top of the ridge and were greeted by a warm breeze. The juniper-covered hills looked the same to Johnny as they did when he was a youngster. “Nothing has changed, Uncle Manny, and that makes me glad. All the trees, all the rocks, the orchards, the valleys and hills, the eagles, the buzzards, the lizards … it’s nice to know that there’s a place in your memory that actually remains constant in the real world. A place you can come home to whenever you need to get grounded in reality, and when you need to re-establish a connection to the past.”

“Or to the future, Johnny. Or to the future.” Manuel was looking toward the southwest; the sun was in his eyes, the wind whipped his long white hair into flag-like waves; his shiny, darkly tanned skin glistened with the weathered patina of a well-worn leather saddle.

Johnny shivered. The temperature was hovering around the century mark, and he felt chilled, such was the emotion of the moment. Why? He didn’t know; but all of a sudden he felt drawn back to this place, back to his roots, back to the land of his formative values and sweet memories.

Early December in the high desert of southern Arizona is about as lovely as the middle of summer in northern Wyoming: the days are seasonably warm and the nights are pleasantly cool. In some desert meadows, between the ocotillos, the wildflowers completely paint the ground with a panoply of muted and brilliant rainbows. The towering thunderheads that build in the afternoon over Santa Cruz County, move east to Cochise County’s Dragoon Mountains, only to fizzle out in a gaudy display of dry lightning that strikes the rounded, exfoliated granite outcrops, making crunchy crispies out of unwary scorpions and tarantulas.

“So, you’re saying that Diego’s uncle tells him to avenge the death of his father and his other uncle by killing Hoover, and then he learns from his father that Hoover also killed his sister. Wow! That’s a terrific two-for-one deal. No wonder he wants to change his ways: killing Hoover was cathartic and epiphanitic for him. He finally made his peace with his father‘s spirit, and now it’s time for him to make his peace with himself. It‘s a lovely and very ancient story line. Pithy, too. My ancestors‘ legends are loaded with stories like that. You know – death, revenge, rebirth. Very tribal, very mysterious, very personal … and very powerful.”

A little-known, but particularly evil, Nazi war criminal is on the loose. He escapes to South America, then eventually makes his way to North America, leaving a trail of blood behind him.

Newspaperman Johnny Skull, with help from a well-connected U.S. Congressman, an Israeli Secret Service agent, and a terrorist-tracking organization known as World Interconnect, is on the Nazi’s trail, a trail that leads from Italy to Argentina to Mexico to Arizona to British Columbia, and finally to Wyoming.

This book, the fourth in The Johnny Skull Series, follows the military careers of Johnny, a U.S. Marine Lieutenant, and his grandfather, a U.S. Army Major, as they hone their particular skills in hunting down the world’s evil thugs. The story also revisits the life of the Nazi, and his metamorphosis from a bumbling fool to a ruthless killer.