A Collection of Short Stories and Novellas 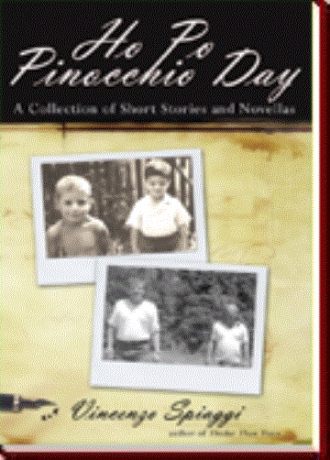 Excerpts from “Ho Po Pinocchio Day,” a collection of short stories and novellas

The morning mist was burning off. The sunlight began filtering down to the grass, the dew glistening. The day would be wonderfully warm and sweet ... and pregnant with the ethereal vapor of things stranger than strange. It was the kind of day that nurtured something more than the expected, random, inexplicable machinations of the universal tapestry we call life.

Life: What is it? That’s the eternal cosmic question. If life is the universal tapestry, then each of us must be the fibers, the threads, the colors of its fabric. But, how real is life? Do we live life only in our minds, or does life actually exist in what we call the real world? And, when do we live our lives? Is life forever, or is it already over for us, and what we think is life is just our subconscious memories being played back to our eternal souls on some spiritual video recorder?

Who can say what spatial relationship exists between our consciousness and ourselves? Are we living in the present, in the past, in the future, or in all three simultaneously? Do we really know what the differences are, if any, between them? Can we metaphysically actually bridge the gap between events that have happened, and those that are yet to happen?

Hunched over, with his head pressed firmly against his kneecaps and his hands tightly gripping his shins, he appeared as a wretched soul sitting on the corner of the bed in the corner of the sparsely furnished room. His wiry, dread-locked hair looked alive as stiff black clumps corkscrewed every which way, like snakes from the head of Medusa. His newly washed white shirt was gray and ragged with wear, and his jeans were threadbare at the knees. Barefoot, his long toenails protruded like teeth from the ends of his long, pale, bony toes, which protruded repulsively from the ends of his long, pale, bony feet.

The alarm clock on the table at the end of the bed sprang to life with a loud, ear-piercing scream. His hands jumped to his ears, pressing tightly against his head. He looked up, his black eyes glaring menacingly at the source of the presumptive intrusion into his all-too-familiar thoughts. His white teeth gritting through a forest of black hair, his narrow nostrils flaring with each hurried breath. With the quickness of a lizard’s tongue, his arm shot out, flicking the snooze alarm switch on the clock that never seemed to tire of ushering in another round of memories ... and nightmares.

The subway train boomed through the tunnel under . The incessant clickety-clack of metal on metal appeared to mesmerize the passengers as they stood, sat or leaned in a swaying motion in response to the rhythmic, sideways undulation of the cars on the rails.

Fourteen short stories and novellas explore the mysteries of the reality of life, death, relationships, revenge, spirituality, and enlightenment. Two college students are visited by their future selves. A young woman occasionally wakes up in strange places. A dying man wants to plan his next life before he passes on. A past-life-regression hypnotist learns about his ancestors through the past lives of a stranger. A middle-aged woman confronts her biological clock. A well-meaning, idealistic student deals with the apathy of a certain segment of society. A fashion model cannot break her addiction to junk food. A poet is visited by his own eternal spirits. A man and a woman meet in a dream. A young boy learns the truth about the afterworld. An ancient spirit touches the lives of several generations of a rural family. A medicine man exacts revenge for the poor judgement of his descendants. Three men and three women play expensive games at a mountain retreat. And, an author describes his reasons for writing a book about his experiences in an upscale mountain community.