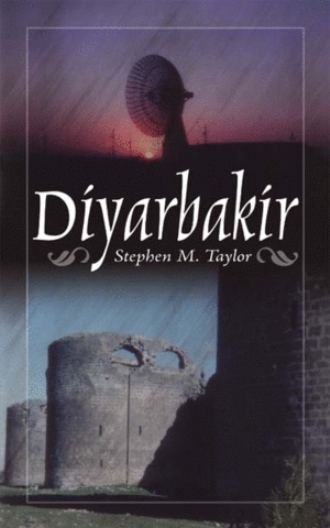 Col. Horn saw the reflection of the envelope and the extended hand of Col. Petrokova in the window. "Can I trust this son-of-a-bitch?" he uttered to himself. He took a pensive breath and then turned around to receive the envelope. In so doing, he missed the aburpt appearance of the young man and woman on the top of the great wall of Diyarbakir immediately before him out the window.

Iesha again found it difficult to breathe...this guy was lying right on top of her. She tried to talk.

"Shuuuuush!" ordered Loyal. The car below had stopped. "Don't talk."

"Shuuuush," he reiterated. Someone was coming up the steps. Loyal could hear him. Meanwhile, the car moved off again in the direction of the dolmus, which could still be heard thump-thumping down the road whith its bent wheel. "We've gotta go," he whispered. He dragged her to the other side of the wall where he could see the New Hotel across Ataturk Square. Their best chance was to descend and make a run for it. But how? Their time was running out.

"What are you doing, you meany?" she protested.

He held on to her wrist and tried to nudge her over the side. "I'm going to lower you," he suggested. "Hurry."

Hanging on to her wrist, he prodded her over the edge, where she dangled some eight to nine feet above the ground below. He looked back over his shoulder.

Loyal dropped her as soon as she opened her mouth. He eased himself over the side on his belly and hung by both arms. As he let go, he saw the head of his pursuer appear at eye-level across the top of the wall. He could not know if he was seen. He landed upright and on his feet. Iesha was picking herself up.

"What the..." she started to say, but Loyal clamped his hand over her mouth and pinned her body firmly against the cold, basalt blocks of the wall. He held his breath and looked upward, while holding a finger over his lips for the benefit of Iesha. He was aware of the warmth of her body and the soft contour of her breasts and thighs. She felt like a woman. She felt good. He was mad at himself for such thoughts, especially under calamitous conditions. He backed off, remembering that she was a hooker for all he knew...and a black one at that.

A Cold War drama that ends in the future. Cultures and technologies first collide in the ancient city of Diyarbakir, in the heart of Kurdistan, and end up in America. Join an impetuous lieutenant, a nostalgic stewardess, and an electrical engineer, as they inadvertently become entangled in events of global significance, culminating in an Iranian missile attack on America. Entertaining and informative, this novel is packed with action and packed with history. The ending may not be too far from the truth.