The Anarchy of Stephen and Matilda 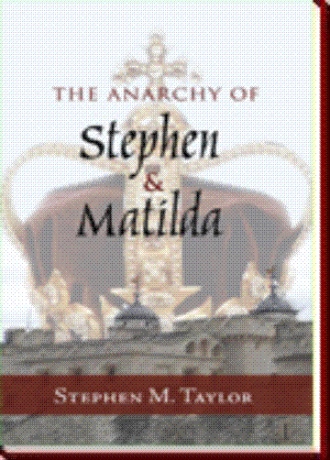 He opened his eyes and squinted.  What he was kissing didn't feel like a mouth.  He moved the woman's lips apart with his fingers and saw she was missing most of her front teeth.  Those he could see where partially black, in various stages of decay.  He looked at her eyes and noted the wrinkles about the edges.  God, she's at least forty, he thought.  He groped for her breasts and pumped vigorously in an effort to maintain his excitement and finish the job, while sparrows chirped in the rafters overhead.  Nearby, a horse neighed softly and shuffled the straw beneath its hooves. Again, he had consumed too much wine.  He collapsed on the peasant woman, then rolled to the side and passed out.

The woman serf stood and quietly dusted her garments with her hands.  She looked at the man and laughed to herself.  Deftly she removed a small leather pouch from his belt and, satisfied with the weight and feel of its contents, pulled a hood over her head and furtively scurried out of the barn.

Twenty minutes later he stirred.  His head hurt and he was momentarily disoriented.  He stood and relieved himself in the corner of the stall.  It was then he realized his money pouch was gone.  He laughed, having filled it with shiny, smooth stones from the creek for just such an occasion.  He was unusually clever.  He headed for the barn door and peered into the sunlight.  It was an atypically warm day for September.  The leaves were starting to peel from the trees.  He headed across the courtyard and spotted the two women.  He was on a collision course with Matilda.  Who the other woman was, he didn't know and didn't care.  For now, he wanted to avoid Matilda, always chastising him for his drinking.  He veered quickly to his left and pretended not to notice them.

Matilda saw Ranulf and was grateful for his diversion.  He was repugnant as far as she was concerned.  Fiordiligi saw Ranulf, too, and although she didn't immediately remember when or where, she knew she had been with him.  She turned her head slightly and, unobtrusively, tried to pull her scarf down to cover her eyes.

Matilda noticed her behavior and glanced back at Ranulf with a puzzled expression.  "Someone you know?" she inquired, hoping he wasn't.

"Me-ah?  No-ah, madam," she stammered, recovering from the initial shock of the question.

They continued across the yard of .  Matilda knew she wasn't doing the prudent thing bringing in this waif, who claimed to have been a handmaiden for the Queen and, most bewildering, the King's lover.  She had the authentic emerald ring and wasn't even trying to sell it.  Those green eyes were enthralling.  She had never seen anything like them and she had met many Italians on the Continent.  She had decided Fiordiligi might be useful.  She plied her for information about the Ki

Join Matilda Plantagenet in her violent struggle to overcome sexism in medieval .  Share her aspirations as she attempts to balance love and motherhood with the ultimate political career.  Experience her frustrations as she battles sins of the flesh, dogmas of the Church and her archnemsis, the beguiling Stephen of Blois.  Truth is stranger than fiction in this historically accurate novel of a medieval time, when violence, lust and greed flourish.  It begins with the arrival of the to , where cousins Matilda and Stephen grow up together in the shadow of .  When the King dies, both claim to be his rightful successor and maneuver for the vacillating support of the Church, the nobility and the citizenry, all of whom maintain a what’s-in-it-for-me attitude.  What follows is Matilda’s 19 year knock-down, drag-out struggle for the throne.