The First Raindrop of the Storm 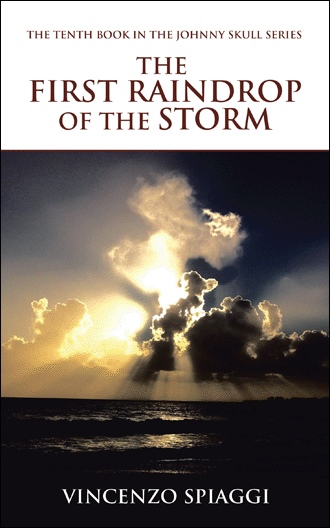 The lifeless, disembodied spirit hovered languidly above the deadly and chaotic scene outside a popular sidewalk café in Wellington, New Zealand. It saw the physical destruction, it heard the screams of the children, and it saw the blood seeping from beneath the body of the lifeless woman lying on the cold, concrete sidewalk. But when it noticed the blond-haired man crawling toward the dead woman, it knew its mission had failed, because the man – Monte MacKenzie, the Prime Minister of New Zealand – had been the primary target; and he was still quite alive. The hovering soul looked around for its own body, but saw only bits and pieces of it scattered here and there: the bloodied torso with the explosive vest in tatters; the red sneakers with stumps of the lower legs still attached; the yellow jacket with one shredded arm hanging from one sleeve; and the severed head with the black baseball cap miraculously still in place. But most of all, the spirit of the man who had been the radical Muslim jihadist Muhammad Akbar el-Pupiq, was disappointed because he had not immediately been welcomed into paradise by Allah, the prophet Muhammad, and the seventy-two virgins. That glorious welcoming ceremony had been promised to him long ago: from his early days at the madrasa school in rural Iran, when he first mortgaged his soul to become a martyr for the greater good of radical Islam. Once again the spirit looked all around, searching for signs of his god and the prophet and the smiles of the virgins, all welcoming him with open arms … but he saw nothing. He scanned the stunned and bleeding crowd of injured people, and the trees, and the clouds … again, nothing; his promised greeters were nowhere in sight.

Iran wants to start the “end-of-days-war” with the West. To that end, a plot is afoot to kill seven key world leaders, thereby forcing the West to respond militarily. Twenty-two jihadists are on the loose in America, preparing to form an Iranian caliphate when the “end-of-days-war” ends. Additionally, a host of Iranian operatives and sympathizers within the American government are aiding Iran in its attempt to turn the world to ashes. Can Johnny Skull and his WI-7 teammates succeed in saving the world from destruction? WI-7’s road to success is circuitous, but the ultimate outcome will surprise even themselves. “Another exciting voyage into the world of war between the future and the past. Spiaggi has spun another classic spy thriller. A fast-paced tale of good versus evil, and how things always work out for the best if you just allow events to unfold by themselves.” Xenio Y. Zachariah, Literary Consultant