Happiness is the Road 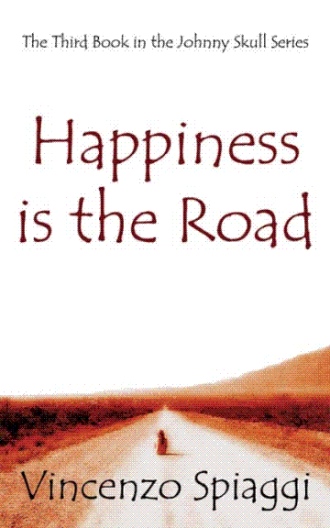 He came to America from Sicily just before the end of the war to end all wars. It took the ship a full week to get out of the Mediterranean Sea and into the open ocean, such was its hopscotching route from Palermo to Cagliari to Marseilles to Barcelona, and finally to Gibraltar and beyond. The trip across the Atlantic seemed endless to the ten-year-old boy, orphaned less than a month earlier when a rogue German soldier – on the run from the local Mafia after he’d stolen one of their trucks – killed the boy’s parents and two sisters in their farmyard while on a drunken rampage across the western Sicilian countryside.
The boy, Giovanni Pasquale Scugliari, known to everyone in his village of Gibellina Nuova as an excellent hunter of rabbits and foxes, shot the German soldier from the hay loft in the barn about a hundred feet from the site of his family’s execution in the farmyard. He also shot the two other drunken German soldiers who stood by and cheered as the lone gunman slaughtered his family; three deadly bullets in three inebriated brains from a lever-action rifle that was as tall as the boy himself.


At the age of twenty-two, Johnny opted out of the U.S. Marines after four years of active duty – two years as an MP along the DMZ in Korea, a year as an MP at Camp Lejeune, North Carolina, and a secretive year in Special Operations. His GI Bill eligibility paid for his college education at the University of Arizona; but it took Johnny five and a half years to graduate because he took a light load of classes each semester, which permitted him to work part time as a mine surveyor at the Asarco copper mine south of Tucson.
He changed majors three times before settling on a career in journalism – with a geology minor, mainly because he worked at the mine, and because he loved the hard science. But mostly, he liked the writing and photojournalistic aspects of the discipline, and he really he enjoyed the twice-weekly cerebral bouts he would have with his politically oriented, agenda-driven professors and mush-minded fellow students, on the concept of objective and balanced newspaper reporting.


Johnny and Muff crossed the border into the United States at Maida, North Dakota, just after midnight on Feb. 1, 2000. The temperature was twenty degrees below zero. They got out to relieve themselves in the snow that was piled up on the side of the road about half a mile south of the Port of Entry. Their vaporized exhalations froze just inches in front of their faces and fell … tinkling … into the snow.
Almost immediately, Muff was distracted by something in the sky. Johnny, sensing Muff’s heightened interest, looked skyward. Racing across the crystal-clear, star-studded sky was the neon dance of the northern lights: the Aurora Borealis. The panoply of color changed quickly from a bright-white knife-like pattern, to a multi-colored pastel veil, to a riotous, amorphic swirl of changing shapes and hues.

Halfway through the bagel, a middle-aged man walked in. Richie Paloma, who Johnny had met a week earlier, owned and operated one of the two photo studios in town. Richie had been on the losing end of a rather gruesome auto accident eleven years earlier, when, while changing a flat tire one night on the traffic-side of his vehicle on Interstate 10 east of Tucson, he was struck by a car driven by a drunk driver, who then proceeded to leave the scene of the accident. Richie’s badly broken body was found the next morning, he was barely breathing; his rehabilitation lasted three years. Now, with his left leg severely bowed, and his back held together by all sorts of hardware, he walked with a cane to get around, however slowly and painfully. His bitterness over the accident had evaporated long ago, and now, with the occasional help of painkillers, he just lived from day to day, thankful that he was still able to enjoy life and wake up every morning. He considered his daily awakenings to be a treasure from God, and he greeted the gift of each new morning with one thing in mind: to have enough energy to just make it through the pain to the next day. Luckily for him, the insurance settlement helped a great deal.

As the other three panelists and the moderator looked incredulously over at Johnny, he continued. “It is not proper to manage the news, and to give your readers what you want them to learn in dribs and drabs; to do so is to insult the reader’s intelligence. It is not our job to get them to think the way we think; our job is to get them to think, period. Agenda-driven news reporting that is based on opinion rather than fact, is counterproductive, and it creates followers, not well-informed readers. And, worst of all, it smacks of laziness on the part of the reporter. In agenda-driven reporting, the reporter only has to report on one side of the issue; that’s half the work. That’s okay if the reporter would accept only half the pay for reporting half the story.” The audience laughed at the suggestion. He went on. “So much is lost when only one side of the story appears in print, and history suffers because of it. Don’t forget, our main job as reporters and editors is to be the historians of our little realms, and we wouldn’t want to cheat future generations out of a fair and balanced view of history … now would we?
“In this information age, where everyone is bombarded with all sorts of information all the time, somehow we seem to be less informed, and more misinformed, than ever … most of the time, that is. Everyone has opinions on everything, but no one has any real knowledge of anything anymore, mainly because everything is muddied in opinion rather than fact.”

Johnny Skull’s life experiences from 1998 to early 2006 are explored as flashbacks during his wedding celebration in the fall of 2007.
This book, the third in the Johnny Skull series, documents the young newspaperman’s odyssey from the time he graduates from college in Arizona, until just before he takes a job at The Valentine Voice, the setting for the first Johnny Skull novel.
Unlike its prequels – “Small-Town Weekly,” which documents the day-to-day operation of a small-town weekly newspaper, and “Small Pebbles, Long Shadows,” which follows an investigation that eventually exposes an Islamic terrorist plot to destroy the American way of life – “Happiness is the Road” follows Johnny’s career through seven different jobs as he learns the publishing business.
In Texas, at his first job that lasts only one day, he is run out of town by the sheriff’s daughter. In Kentucky, he saves the life of his next boss and earns a job at a newspaper in Maine. In North Dakota, he rescues a newspaper from mediocrity and brings it into the twenty-first century. In Colorado, he starts a brand new weekly newspaper, only to lose his job just before 9/11/01 when a new owner acquires that newspaper. In Arizona, he resurrects a failing mining magazine to its former exemplary status, and becomes a successful fine art photographer. As the communications director for a trade organization in Washington, he goes head to head with his new boss who has some strange views on intra-office relations. And, in Nevada, he helps a congressman get elected.
But the story also reveals the dark side of ex-Marine Johnny Skull, as he uses the lessons he’d learned from his grandfather to avenge the honor of his friends.