A Year in the Life of an Itinerant Newspaper Editor 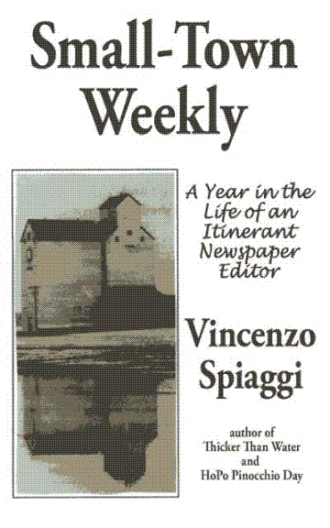 I could see a genuine enthusiasm on their faces, which was a good deal different from the timid and nervous smiles I’d seen on their faces earlier in the day. Each of them was to be an important part of a great metamorphosis – they knew it, and they couldn’t wait to get started. Finally, their efforts would contribute to something far greater than they ever imagined. It was a great look for them. They glowed with anticipation. What greater feeling is there than to know that you mattered, and that you were making an important contribution to something bigger than yourself?

"Better safe than sorry" is an idea emblazoned on our brains from birth. It is the motto of the eternal wimp – and not dissimilar to security and consensus, the credos of the non-creator.

"Do something safe with your life," they say. "Fit in. Don’t rock the boat. Don’t make waves. Don’t be a sore thumb. Follow the crowd. Travel the well-traveled road, because it’s a safe, smooth ride." Of course it is – in the bottom of the ruts.

Accomplishments? Contribute something worthwhile and original to society? Huh? Why bother? It’s so much easier to just roll with the punches until they cover us over with sediment, or spread our ashes on the waves so there’s not a trace of evidence to prove we ever existed: no footprints or tears or laughter; nothing original, risky, or creative; a bland sonnet in which every word rhymes perfectly with every other word. In other words, safe.

Duplication and inconspicuousness is the new zenith of modern man. Be typical, be average, be conventional … be safe, not precarious. Don’t take chances, don’t take risks; do only what has already been proven to work. Conform to the new standards of conformity. Be trendy and faddish … everyone’s doing it. Be a member of the herd. Blend. Better safe than sorry!

Is it any wonder, then, that the careers attracting the most people are the safe ones? "It’s a sure thing!" they say. "They’ll break down the door to buy your product!" they assure you. "It’s the career of the future because it’s the career of the present and the past!" As long as that particular future lasts, that is. Is it any wonder, then, that civilization is bringing up the rear of its own destiny, rather than taking the lead? Better safe than sorry.

Our propensity for safety has kept us in the dark ages with respect to our recent collective progress, and, at the same time, has kept our creative aptitudes on the back burner, slowly but surely allowing the evaporation of the pregnant liquor that fertilizes the flowers in our cranial greenhouses.

The Valentine Vikings’ athletes were no different. However, there was another interesting facet to these particular youngsters. In my conversations with the track coach, (who was also the football coach), I learned that all the girl basketball players also play in the school’s orchestra; and that six of the starters on the football team also are members of the school’s debating team. Therefore, what we have here in Valentine, as in many small towns, is that the school is the focus of life for the students. Every student is involved in more than one school activity. This makes life easier for their parents and their teachers, and it allows the residents of the town and county to develop a real sense of pride in the students, and a positive sense of hope for the future of their community.

The Valentine Voice is a mess. This small-town weekly newspaper is suffering from listless reporting, lifeless news presentation, and dwindling advertising revenues, all a result of its inexperienced, inept, and feckless management, and lack of effective community awareness.

Into the equation enters Johnny Skull, an itinerant newspaper editor who has made a career of revitalizing failing, small-town weeklies and turning them into successful entities by upgrading their writing, reporting, photojournalism, and community advocacy.

Through his editorials, feature articles, and interaction with the locals, we learn about Johnny and how he transforms the woeful newspaper into an award winner in just one year.

His efforts, and the efforts of his newly energized local staff, are woven into the events and fabric of the town and county, including a tornado, a successful high school sports year, a surprise visit to the town by a rock ‘n’ roll legend, a mystery woman who sends love letters to Johnny, a major fire, and a multiple-murder spree.