Read-aloud to Grow On 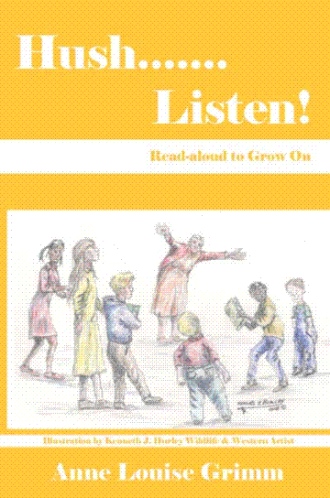 It was morning, and Herkimer House was beginning to awaken. His front shades weren’t up yet, but re was activity in bathroom, one bedroom and kitchen.

“RRRRRRrrrrrrrrrrrrr . . .” awoke Frosty Refrigerator. Sometimes he was already awake before Mor came into kitchen. Usually though, he slept until she had opened his door to remove orange juice, ham or bacon, eggs, butter, milk and jam.

Unlike other books classified by age as juvenile or adult we choose to think grandparents enjoy the same stories as preschoolers, and pre-teens can be fascinated by a textbook a parent brings home from an evening class. At least, this is the author’s experience.

Why not a book then, free of bias and classifications—with stories slanted to a number of “age levels” and interests? Select your favorites to re-read. Perhaps another will grasp your attention more fully later.

Anne Louise Grimm spoke no English when starting First Grade at on the in the southwest corner of . In north of the Mighty Columbia—a river dividing her state from . The smaller Willapa also drains directly into the —a far west community in some ways entirely strange and distinct, where even the history reads like fiction.

The first book Anne owned, and long time favorite, was Andersen’s Fairy Tales. She used it learning to read English. Teased about the name Grimm, Anne began writing at an early age, but not fiction. After high school graduation she lived four years in , married and left the state. As her children were growing up, Anne began writing stories—of many different kinds, not only for children. They kept sprouting like weeds wherever she lived.

While early published work was not fiction, her typewritten stories accumulated on shelves and in drawers. Some of them more strange and weird than anything Hans Christian Andersen ever wrote. Later they took on a further life of their own and began sneaking into manuscript files of one computer after another.

Anne’s fourth book, published by AuthorHouse in 2006 as Fletter Cove, snared some for adults. A second aggregation has been made for Hush . . . Listen! Alas, that still has only thinned and not eliminated the short fiction. More of the stuff still sneaks periodically—overnight it seems—unheralded onto the hard drive of the current computer. anne@willapabay.org   http://www.willapabay.org/~anne/annepers.htm

Kenneth J. Hurley, state and national award winning and internationally selling Western & Wildlife artist, can be found at his rural home north of Raymond on the coastal Highway 101—when not participating in art shows—in states and countries almost anywhere. 1.360.942.3808