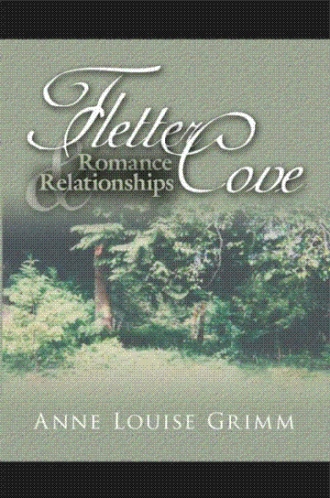 Dan and Edelle Curdane—with ir children—came walking around curve, to see again Fletter cottage in near distance. Prim Bitzy and carefree, irrepressible, rar spoiled little Emerson ran ahead down path, shouting to Abner Fletter, “We’re here . . . we’re here!” Waldo loped from porch to greet m, long tongue dangling from side of his mouth, his tail wagging to belie sad look of his eyes, ears dipping to touch ground at nearly every or step of his short bowed legs. Phillipa was nowhere in sight, but that had always meant she was as usual in kitchen, or doing needlework seated in a rocking chair.

The family had walked of course, unable to drive any closer. Edelle knew children and dog would soon go down to shallow Cheerful Creek and Emerson would fall in. It always happened. They waded and hunted for agates, caught a frog or in season, collected crayfish. All to leave behind, except for three allowed agates each, every visit. Their collections at home already nearly filled two big cans.

The first view of small rustic home was as charming as ever, with its chimneys made of river rock, from one of which a wisp of smoke arose. As so often, Abner in a heavy woolen shirt and well-worn work pants was sitting on top step of porch, carving a root or branch into one of those endearing and very commercial shapes so popular with travelers through nearby Bogg’s Hollow.

A towel and change of clos hung on lines stretching across porch. Though wea

A variety of relationship short stories, highly romantic and otherwise, about couples and families. Some abusive relationships, with resolution of the abused overcoming the conflict. Fantasy and science fiction, touching on the political, involving people from preteen to old age, including using amateur radio for communication and recreation. A wide mix of subjects: geographically, across countries, continents, galaxies, and infinite time. Suitable reading for any age—depicting such subjects as flatulence as amuse both the very young and old—without the common to the media gratuitous, offensive language.

Universal codes, available to many of all ages but understood by very few, not tied to any language and therefore international. Sometimes “disappearing” to start over is a solution—and other times reappearing works even better; families don’t always know best . . . often they just don’t understand; a twist, in transfer between bodies of one creature and another with sweet/sad outcome; the feminist solution, sometimes to the good of all involved; a lighthearted facing of the final inevitability across generations; sacrifice of personal happiness for the sake of misunderstanding, innocent others; time travel altering the future; “scientific” solutions—tongue in cheek—to a few of the world’s problems; the take of the devil on what we do, giving him/her the upper hand no matter what choices we make; the adventure present in an ordinary day of family life; the happy, unbelievable secrets necessary to keep in old age. “Going down with the ship” can be a triumphant ending; seeking an alternative diagnosis makes all the difference. And, just what is it that can be found with diligent search through foreign languages in public and university libraries around the world? Finally, an interspersing of verse in as many different subjects, to set off one story from the next.

Anne Louise Grimm—a Federally licensed Extra Class amateur radio operator with Volunteer Examiner certification, KA7TON—is a member of the National Society of Newspaper Columnists. A 7th degree member of the Grange, she belongs to the auxilliary of VFW Post # 968 in where her late father and brother were both members. As member of the American Radio Relay League, she can be reached as ka7ton@arrl.net and she writes on many subjects, currently emailing the free monthly newsletters SPARKS for WARC—KD7KAJ (Willapa Amateur Radio Club) and PROSPECT for Willapa Chapter DAWN, Domestic Abuse Women’s Net. She also emails the weekly Grimmly Reflecting column to subscribers. Much of what she writes with fictitious names and wildly impossible plot, covers underlying historical facts tied to famous names, as recognizeable by those who have traveled there or lived it.

Born in the of bilingual parents, Anne lived overseas for over 17 years, and has traveled extensively in countries of North and . English is her second language, learned in public school in the rural . In adulthood she learned enough Spanish to communicate—though often on reflection having made embarrassingly ludicrous mistakes.

Anne now  lives in an apartment near sea level not far from the , with two faux fur cats and a stuffed owl . . . none of which need feeding. Where she does her own HTML coding of http://www.willapabay.org/~anne/annepers.htm and her living companions are a banana plant and aloe vera, from which increase she keeps trying to give away starts.