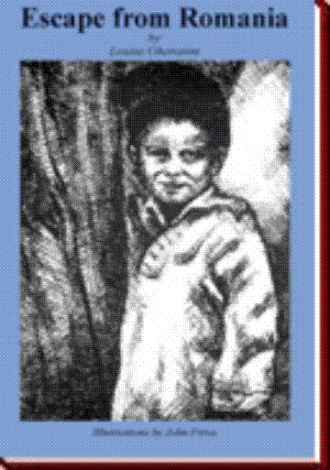 Loud banging on the door awoke Mihai from a sound sleep. He sat bolt upright.

Mihai knew it was the Securitate.  His heart was pounding. He felt sick. The dreaded secret police were at his door!

Mihai, at ten, had known fear before.  Like the time two years ago when the Russian soldiers came to his village, Orsova.  He remembered how he trembled as he stood beside his father and was forced to watch the burning of the church, the shooting of the priest, and the rounding up of all the young men. He would never forget his mother’s white face as the Russian sergeant pushed his father against the wall and shouted, “You come next time,  bandit.”

Before Mihai could get out of bed, he heard the door slam then the roar of a big truck. His mother screamed...one long piercing scream.  Then, there was silence.

Mihai ran into the kitchen.  His mother was crumpled up on the floor. For a moment, he hesitated. He had never seen her like that before.

At the sound of his voice, Florica raised herself and held out her arms.  They clung to each other, rocking back and forth for some minutes. Then she spoke:  “Papa said we must go.”

“We won’t see papa for a long time, Mihai.”  His mother tried to stop the tears that ran in big drops onto her nightgown but she couldn’t.

Mihai felt down deep in his heart that he would never see his father again. The same thing had happened to so many of his friends. One night the Securitate had come, had arrested their fathers, taken them away, and no one had ever heard of them after that.

It was the year 1965. A very cruel man named Nikolai Ceausescu was President of Romania. Everyone was scared of him but they could do nothing because the soldiers would kill them if they tried.

“Oh Mama!” was all Mihai could say as tears blinded him and ran down his cheeks.

His mother stroked his dark curls.  Then, placing her hand under his chin, she raised his head and looked into his sad black eyes. “Mihai, we must go now before anyone finds out about papa,” she said firmly. “When it gets light it will be too late. The Securitate will be watching.

Put on your warmest clothes and hurry.”

Escape from is the story of a young boy of 10 who escapes with his mother from during Ceausescu era.  It tells the adventures they had as they made their way out of into .  It is written for 4th/5th/grade level and strives to educate as well as entertain.

Born and raised in , Louise Gherasim came to the in the late 50’s.  She is not retired after spending 35 years in the classroom teaching everything from art, music, history and philosophy to English language and literature.  She now lives in with her Romanian husband.  An accomplished writer with an elegant literary style, Louise has written numerous stories ser in and .  Her objective is not only to entertain but also teach and instruct.

Louise knows through and through, its people and its history never fails to capture the spirit of that warm and enduring land.  She visited and was immediately drawn to its people.  “There is quiet a remarkable resemblance between and ,” she declares.  “Both countries have known the high-handedness of the oppressor.  Both people shave borne the injustices and cruelties of the suppressed.  Both are countries with civilizations and cultures read older and nobler than their subjugators and both remained, despite all odds, true to their Christian faith and traditions.”