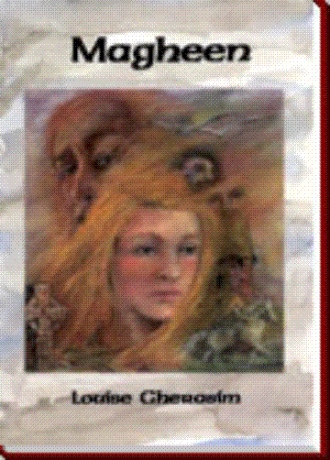 'My God!' She turned again to face the Lieutenant. 'You mean to tell me that...that Eileen Reilly and her whole family had to be slaughtered just because there's a rumor that the French are...are coming? It's... You English bastards! Savages!'

She started to rise, determined to quit the spot immediately. The Lieutenant wasn't to blame. It was that acursed Captain...yes....

'Oh, no ye don't. Ye got what ye wanted out o' me. Now it's my turn.' At that moment, he caught Magheen by the arm and pulled her to himself with all his strength.

Taken by surprise, she fell over on her side. She was at his mercy, and within seconds he was astride her. Looking up into his eyes, she saw the Englishman in a different light. His eyes were mere slits. They had lost whatever innocence and sympathy they had held previously. He became as one possessed; lust and a cruel determination to have his way with her had taken command. 'Let me go. Let me go, you swine!' Astride her, Magheen was unable to free herself or move. All she could do was pound on his chest with her clenched fists. Ignoring her futile efforts, Bill Jenkins grabbed at her bodice with both hands and tore it open down to the waist. In that same instance, Magheen withdrew the knife she had concealed over her breast and struck with all her might, plunging the sharp blade into the unsuspecting chest. Incredulously, the young soldier looked at her for a brief moment, then, with his right hand, he tried frantically to stop the flow of blood as he sought to dislodge the blade with the other.

'Slut, Irish bitch, you'll die for this,' he groaned and the blood gushed from his mouth as Bill Jenkins fell forward on top of her.

'Aaa.....h! My God!' For a moment Magheen froze, then realizing her predicament and that at any moment she might be discovered, she pushed the body to one side. She got up and looked at the dying youth who now lay face upward, the knife still protruding from his chest. Her face showed only revulsion; no pity, no regret, no remorse. In her mind, it had been a life and death struggle; she was the victor.

Ireland in the reign of King Henry V111 comes alive with patriotic fury as a young woman lives out her destiny in MAGHEEN, a historical and romantic novel.

As a young girl from the O'Neill clan, Magheen is orphaned and sent across country to live with her uncle, Tom O'Connor. She learns early about the dreaded Sasanach, the English invaders, who plunder and pillage their way through Ireland, raping and killing in their path. As she matures, the fiery and strong-willed Magheen comes to realize her heritage as an O'Neill will be more than just marriage and children, but rather a destiny to help unite the clans of her beautiful Ireland into a strong fighting force that will drive the hated English from their shores forever.

Teenage romance and elegant parties break the tension after the Sasanach attack her village, but Magheen finds herself thrust into the politics of her country after a fatal encounter with an English soldier. Her romantic heart further complicates her life when she falls in love, as she nurses back to health, a shipwrecked French officer, Hugo, only to lose him. Magheen struggles to find another to marry only to fall victim to the political intrigues of the clan and end up marrying a man she doesn't know in order to unite divisive Irish factions against the British.

Louise knows Ireland through and through, its people and its history and never fails to capture the spirit of that warm and enduring land. She visited Romania and was immediately drawn to its people. “There is quite a remarkable resemblance between Ireland and Romania,” she declares. “Both countries have known the highhandedness of the oppressor. Both peoples have borne the injustices and cruelties of the suppressed. Both are countries of civilizations and cultures far older and nobler than their subjugators and both remained, despite all odds, true to their Christian faith and traditions.”