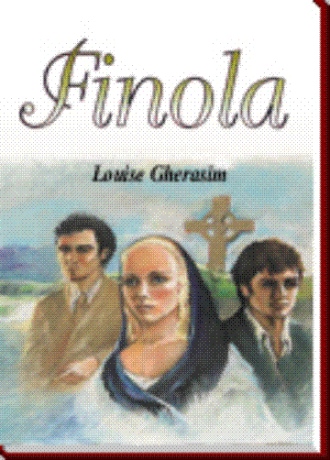 She heard him long before she saw him. The clear flute-like sound ascended on the warm air then floated, it seemed, in her direction. Fergus O Rourke, known as Dubhdara or Dara thrilled the heart of every young lass from the Cliffs of Moher to the banks of the Shannon River. But Dara had eyes for only one, Finola O Donnell, and it was her heart he was hoping to captivate on this bright spring morning as he whistled his way down the hillside. For her part, Finola wanted nothing more than to be on her way. She had a job to do and she intended to do it so well, she would make herself indispensable at the Manor.

She quickened her steps along the narrow b ithr n and when she reached the stile, the only entrance to the meadow behind the Manor, she stopped before mounting the three stone steps. Why? She wasn t quite sure. Not unmindful of Dara s good looks, nor the fact that he was greatly attracted to her, she tried to stifle the surge of emotion within her breast. The sound of his whistling was close now Her heart started to pound, a flutter a moment of anticipation Did she really feel something for Dara? she asked herself. Then, just as the dark youth rounded the bend, Finola picked up her long skirts and tripped nimbly and daintily over the stile and into the meadow. She was well on her way before he reached the spot where she had been standing.

Somewhat crest-fallen, Dara mounted the stone steps where he had an unobstructed view of the meadow and watched as she hurried on. When she didn t look back, he waited only long enough to see her reach the gate that led directly into the yard behind the Big House . Disappointed but undaunted, he jumped from the stile and sauntered leisurely toward his fields at the lower end of the valley. He d try to catch up with pretty Finola later, on the way home. The thought of her sweet face would keep him going that day, and the determination to rescue her from slavery, from the employ of an Englishman, goaded him on.

Dara was nineteen. Standing over six feet, he was a powerful young man, broad shoulders, strong shapely body all muscle and sinew. Exuding vitality, virility, and robust health, he was known far and wide as the handsomest man in the County Clare. His nickname, Dubdara, (black oak) was acquired quite naturally, for Fergus had a thick crop of jet black hair that fell in soft waves on a broad, lightly tanned brow, and his robust physique was obvious. His eyes,the color of ripe sloes were set wide apart under dark brown brows. And in those dusky pools the temper of Dara O Rourke s soul was mirrowed. They could be soft and loving when his thoughts were of Finola or blaze like hot coals in moments of anger. At other times, they betrayed his Celtic nature, his melancholy side. But most often, those sultry orbs were filled with a merriment that was irresistible and contagious. His nose was straight and flared slightly at the tip, giving his face an aristocratic touch. He had a fairly wide mouth, the upper lip well defined. And when he laughed, as he often did, Dara displayed a set of regular sparkling white teeth. To his great physical attributes were added those of a uniquely forthright personality. He was an honest man, a just man, a man of integrity. In one so young such traits might lead one to think of him as a dour, serious, perhaps quiet person but Dara was quite the contrary. He was, by nature a happy boisterous youth ready at the drop of a hat, to play a prank on his friends of which he had plenty. He could always be relied upon for a joke, for his wit was as keen as his tongue was sharp. He was self-confident and invariably optimistic. It seemed that the fear and hopelessness gripping at the heart of every other man in Glencarrow had not even touched Dara O Rourke.

Despite the loss of most of his potato crop the year before, Dara managed to provide for his widowed mother and young sister, Una. He refused to be beaten. His indomitable spirit rose above all obstacles, simply rejecting all thoughts of defeat. He would live up to the name he so proudly bore. He would weather whatever storm blew his way. Just as the old oaks, clinging tenaciously to the rugged hillside had defied the onslaughts of a hundred years or more, Dara would survive.

Was it the brashness of youth that gave him such confidence or was there something hidden in the inner recesses of his nature? He had no father to emulate, no living male relative on either side of his family. His mother was a mild-mannered, rather retiring person and his only sister, younger by three years, favored her personality. Whence then came this tower of strength, this tenaciousness, and will-power? The only explanation that seemed plausible at the time was that although Dara had lost his father at a young age, the man, a power-house of moral courage and rectitude, himself, had left an indelible mark on the eight year old boy. For until his dying day, Dara would remember the words uttered by his father before they led him away to execution. I have lived my life according to the Christian principles handed down to me by my parents. I have never intentionally harmed any man, but if as a patriot I have used a weapon against despotism, I deem it my duty to have done so. Nor do I repent of my actions.

During his trial, Denis O Rourke appeared calm - his mouth, and the features around which defiance was a constant - though immobile, firm, and grave - had an air of conscious superiority. His head was erect, his eyes were focused. A man of purpose and determination.

The image of this indomitable man as he stood in the dock that morning more than ten years before was still fresh in Dara s mind. Nor did a day pass that he was not mindful of it.

In the ten years since his father s death, Dara had never reaped the full reward of his labors. The blight had claimed part of his potato crop for the last three years. But, by diligence, good management, and frugal living, he not only provided for himself and the family, he had even succeeded in saving.

The year 1845 had seen his total potato crop fail miserably. The following summer showed promise, all that Dara could ask. The fields bloomed in profuse splendor and the wise nodded and commented, "Sure tis a bad year indeed, that isn t followed by a good one." But, by the middle of August the hopes and expectations of many were as blighted as their fields. Dara was downcast but not defeated, for he had planted more grain than potatoes on his twenty acres. He had doubled his production of pigs and poultry and by clever buying and selling would make do. He congratulated himself on his good judgment. He had but to look around him to see what he had been spared. The charred shell of O Donoghue s rude shack was a stark reminder of how Agent Patrick Dunne dealt with the tenant farmers under his charge. Those who were unable to pay for what was rented to them were swiftly and mercilessly evicted, and, lest they return to the scant shelter from which they were cast, it was instantly put to the torch.

Dara felt the blood in his veins run cold as he recollected the treatment that was meeted out to Sean O Donoghue, his wife, Maeve, and their four small children. Forced to seek shelter in a damp, dirty hollow in the side of a hill, the three youngest soon succumbed to cold and hunger and within two weeks Sean had lost his entire family.

The injustice of it gnawed at Dara s guts; a sweat covered his broad brow and spread over his handsome face. It was a cruel thing. The civilized world had long ago thrown off the bonds of the despot, yet, here in Ireland that tyrannical form of government still prevailed with ninety-five percent of

The story begins in Ireland during the famine years 1846-47. This poignant novel tells of Finola O'Donnell's struggle to survive during those incredible years after the death of her mother and other members of her family. She eventually leaves Ireland and finds work in New Orleans where she becomes romantically involved with the son of a wealthy Irish immigrant.

Her lowly situation as the family housemaid forced the couple to elope. They sail around The Cape of San Francisco and again tragedy strikes

She meets and befriends such prominent figures as Lola Montez, the Freemonts, and others. It is the story of passion, drama and loves bittersweet and tragic.

Born and raised in Ireland, Louise Gherasim came to this country in the 1950 s. She is a successful novelist, writing for adults, teenagers and children. Louise now makes her home in Oregon with her Romanian husband, after spending over thirty-five years in the classrooms of the world, teaching everything from art, music, history and philosophy to English Language and literature.