Memoir of a Paperback Writer and The Philosopher's Stone 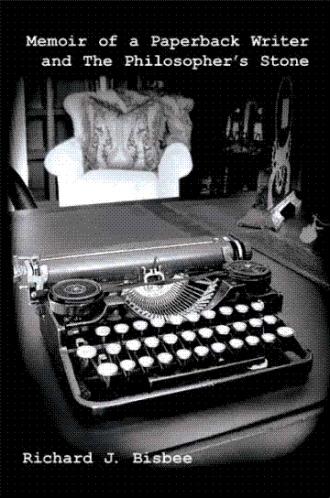 Now that the end of my life nears, I, Charles Michael Kaufman, am dictating this at last truthful history of my life.  I was born 76 years ago, on .  Yes, April Fool’s Day.  In Spring Green, WI, the only son of middle class parents--my father was a high school teacher, at one time or another he taught just about every subject, a small town Renaissance man, and my mother was an elementary grade teacher. In their day,          teachers were most modestly paid, but because they both worked outside of the home, which was unusual in their day, my sister and I were well provided with the necessities of life.

We lived in a large, white house on , surrounded with books and learning from an early age.  My parents had met as undergraduate students at the in and had been together ever since.

Not a typical beginning for a man who presently is listed on the Forbes Magazine’s list of the 400 richest Americans, coming in at number 397.  A couple of billion dollars more or less, now just enough to barely make the list, but nonetheless the third largest individual fortune in WI and richer than all of my high school classmates combined!

Those of you who have read some of my books already know the story.  How I taught school for thirty years like my parents before me while writing some twenty book length manuscripts, not one of which was published until 1996 when the print on demand technology became available, enabling thousands of authors to be published at last at affordable prices.  But it wasn’t until ten years later, in 2006, that my first real chance for fame and fortune occurred.  I was 55 years old and contemplating retirement when “the fickle finger of fate” pointed at me.  I was the sole winner of a Powerball Lottery jackpot of about 157 million dollars, if I had taken the thirty year annuity.  I took the lump sum payment, which after taxes was sixty million dollars and some change. Overnight, I became the richest person in the area.  The odds of such a win were only one in about 146 million. Not a particularly religious man, I was awestruck.

I immediately retired from teaching.  I had never married, but was reasonably happy as single. And I had always been happy with my pay as a teacher.  My peers often complained of being underpaid, but actually in my generation my take home pay,      adjusted for inflation, made me much more prosperous than my parents, who were truly underpaid in their day.  Thanks to our teachers’ union, in which I had been active.

It was not the money per se that intrigued me.  I was content with my teacher’s salary and impending pension.  I had never craved huge sums of money.

But from an early age, I had always wanted an audience.  I loved creative writing, won some writing prizes while in school, and it was my lifelong goal to be a recognized, best selling author.  I say “best-selling” in the sense that I wanted people to read and discuss my writings only--as I said, I was content with a teacher’s pay and did not desire unusual wealth.

One of my reasons for teaching, besides the facts that I liked it and young people of high school age, was that with weekends and holidays and summer vacations, teachers in Wisconsin only work 180 days a year, just under half or every other day.  This       left me with plenty of time to write, not having a regular woman or wife and children to distract me. Thus, in thirty years of teaching, I was able to complete twenty manuscripts---novels, collections of short stories, novellas and essays, as well as a little poetry and some plays.  I even wrote a few TV and movie scripts with the hope of getting them professionally produced.

But until 1996, when I was able to self-publish through the then new print on demand technology, I got nothing but rejection slips, despite the fact that TV is a vast wasteland, full of banal and mediocre dramas and sitcoms, and that most movie scripts are similarly poorly written.  No one seemed interested in my work commercially while all around me inferior works by others were routinely published or produced and hyped.

In 1996 that changed in part.  Finally, I was able to publish many of my works, only to face rejection by the buying public.  Although I got a few reviews in local newspapers, very few bought and read my works.  Without a major media blitz by the         mainstream media, few works of fiction managed to sell more than a few dozen copies. Inclu

This novel is the fictional memoir of Charles Michael Kaufman, a lifelong resident and graduate of the U.W.-Madison who, after a thirty year career as a high school teacher, wins a major Powerball Lottery jackpot in 2006, amounting to about sixty million dollars in a lump sum, after deducting taxes. Over the following twenty years he parlays this fortune into a personal worth of several billion, with the help of his “sorcerer’s apprentices,” his much younger protégés, six brilliant scholars, three male and three female, who sometimes deceive him, but always work together to ensure the financial success of the Kaufman businesses. In the ears covered by this memoir, Kaufman provides commentary and descriptions of the “brave new world” in our not too distant future, the years up to the 2070’s. Through his eyes we see bits and pieces of our own possible futures.

This is a work of speculative fiction, science fiction, but is grounded firmly in real cutting edge contemporary scientific research and discoveries. The future world it depicts is not only imminently possible, but in some aspects probable.

Richard J. Bisbee graduated from the University of WI-Madison with a Juris Doctor degree in December of 1974 at the age of 23.  For about thirty years he practiced law, mostly in , and is now retired, on inactive status with the State Bar.  He currently lives in .

The author did his undergraduate work at the former WSU-Platteville, now the U.W.-Platteville, in Waverly, , and graduated from the U.W.-Madison in June of 1972 with a B.A. degree with Distinction.