The Walls of Ilium, and Book II, The Trojan Horse 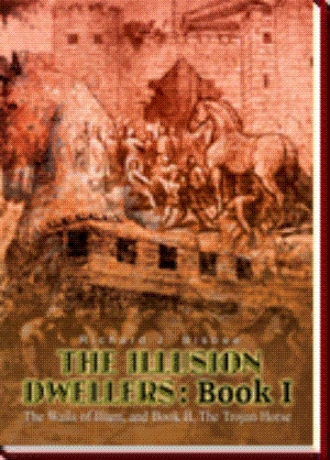 Robert watched impassively from the third floor balcony. He had never seen the Capitol Rotunda more crowded. The new Governor’s inauguration was scheduled to occur at high noon. From Robert’s perch, the Rotunda, flanked by four thick corridors, appeared to be the hub of an ancient, wooden wheel. The cotter pin was the Governor to be, sitting on the platform set up in the Rotunda, opposite the Chief Justice. The new Governor, the former Lieutenant Governor, was to complete the four-year term begun by his predecessor, Governor Leigher. The new Governor, Governor Miller--how strange the title seemed affixed to another’s name, appeared confident, at ease, in command. He was already Governor in all but name only--only a tolerance for tradition prevented him from administering the oath of office himself.

Robert glanced at his watch. It was two minutes to noon, and Colleen was not by his side. He scanned the dense crowd, hoping to catch a glimpse of her wending her way through to the marble steps beneath his feet, to him, not apprehensively, but confidently, knowing that she was never more than a few minutes early or late. He wanted to see her approach. He wanted to see her well tailored "ivy league" figure negotiate every move, overcome each human obstacle. He wanted to see the crowd open and part for her, to see her shrewdly size up each person in her path, and get her way with each one, with a smile, a light touch, a plea for sympathy, a threat. Robert knew that nothing would stop Colleen from reaching him on the balcony, from their last, unfinished scene.

While Robert intently watched the crowd at the bottom of the long marble steps, he felt someone gently but firmly squeeze his left arm just above the elbow. He stiffened to control the shivering--he knew Colleen's touch.

"You took me by surprise" he said, turning toward her.

She simply smiled. Surprised or not, his reaction to her touch would have been the same. Robert fumbled for her hand, which somehow slid into his--his palm was cold and sweaty, but her hand was warm and dry, a firm, familiar grasp. Robert attempted a grin but his eyes betrayed his seriousness. She graciously returned his smile, but her immense brown eyes were not smiling, not really. They were luminously soft. He recognized the sympathetic look that she reserved for those she felt safely superior to, for those who did not hold her in their power. She came up by the back stairway, he thought, to avoid being seen. She did not want Hal to suffer further. Hal, her husband, formerly counsel to Governor Leigher.

The high school band brought in for the occasion finished with a flourish and a clash of cymbals. The ceremony was about to begin. Colleen peered over the railing, intent on absorbing the essence of the inauguration, the symbolic transference of power from one man, from one group of men and women, to another. Robert understood that he was not to despoil the dignity of the moment by attempting to distract her from the ceremony, no matter how desperately he wanted to. He knew that she would be watching everyone of importance on the platform for reactions, for deviations from her rigid code of "court etiquette." Women too often mistake the symbol for the substance, he thought.

Colleen gave him an extra squeeze with her hand before wiggling free, hoping that it would keep him happy until after the ceremony, and promptly forgot that anyone or anything existed except the people and events on the platform below. Later she would marvel at how simple and direct Robert was--she admired his analytic powers when it came to economic and budgetary matters, but deplored his political and interpersonal naiveté. Robert did not realize that ceremonies and symbols were essential to communicate the appropriate put forth for the world to see behavior and policies as opposed to the underlying reality, the hidden agendas. Success in the political-bureaucratic structure requires an understanding and appreciation of the double track. Poor Robert--he was learning, or so it seemed, but slowly. He had developed intellectual blind spots in the half formed belief that it was masculine to always be direct and ingenuous. Like most men he had learned to equate stupidity in certain ways with masculinity. Masculinity, as Robert defined it, was of highly dubious value.

The ceremony began with a prayer-sermon by the Rev. Richard Brown. The Rev. Brown was well known in Capital City for his campaign against permissiveness, especially sexual permissiveness. He frequently wrote letters to the editor of the Capital Correspondent, the city’s leading newspaper. The text of his prayer-sermon was not written in his usual style, except for the obligatory homilies. Obviously, he had been assisted by Governor Miller’s speechwriter. Key words and phrases hinted at the tenor of the Miller administration--the family was described as the basic unit of society, the foundation of the nation and of the state, distinctions between the legal code and the moral code of the putative majority were blurred, and the Governor was repeatedly referred to as the state’s sovereign within the New Federalism, as the Lord God’s instrument on earth.

The Chancellor of one of the campuses of the state university system, a moderate Republican who was rumored to have gubernatorial ambitions, gave a speech replete with the usual platitudes and promises of complete cooperation with the new Governor--a speech that was tantamount to a withdrawal from the upcoming gubernatorial race. His comments were enthusiastically applauded. It was a Republican love feast. Obviously, the Chancellor had been asked to speak as a sop to the moderate wing of the party, to emphasize the solidarity of the newly enfranchised party. Upon introducing the new Governor, they shook hands warmly as the crowd roared its approval. The rotunda was filled with residents from out state who had been bussed in for the occasion. Capital City was considered to be a Democratic enclave.

As the new Governor took the oath of office Colleen perceived the hostility between the old, senile Chief Justice and the youngish, virile Governor. As a conservative Republican, Governor Miller was opposed in the public eye to almost everything that the Chief Justice stood for. The Chief Justice, like most others in high political office in the state, had close ties to Governor Leigher and the liberal, University wing of the Democratic Party. Governor Leigher had been in office over seven years before his unexpected death. During his tenure, he had made the office of Governor of the State more powerful than any other in the Union.

Unfortunately, the master had died before the amendment to the State Constitution providing for the election of Governor and Lieutenant Governor on the same party ticket went into effect. There was much uneasiness among the elected officials on the platform. Most would find it difficult to work with the new Governor. The cruel irony was that his office had been greatly exalted by their own efforts--by Leigher’s entreaties, arm-twisting, threats, and by their own immediate self-interest. In politics, timing is all. And the certainties of the here and now are always more important than tomorrow’s maybes. But the worst possible maybe had occurred, was occurring before their eyes.

The enclosed novel was originally copyrighted in 8/78 and 9/79 as an unpublished work. By 1977, the author learned of the death of a Danish missionary doctor to Zaire from a strange immune suppression, speculated to have been caused by a new infectious agent; and, in early 1979, the author was told of several cases of kaposi’s sarcoma, the so-called "gay cancer" indicative of what would later be called AIDS, diagnosed in young NYC gay males. Hence the "vague forebodings" expressed in The Illusion Dwellers: Book I, The Walls of Ilium, and Book II, The Trojan Horse.

Attorney Richard J. Bisbee graduated from the University of WI--Madison with a Juris Doctor degree in December of 1974 at the age of 23. He currently practices law in Milwaukee, WI.

The author did his undergraduate work at the former WSU--Platteville, now the U.W.--Platteville, Wartburg College in Waverly, Iowa, and graduated from the U.W.-Madison in June of 1972 with a B.A. degree with Distinction.