The Eye of the Idol 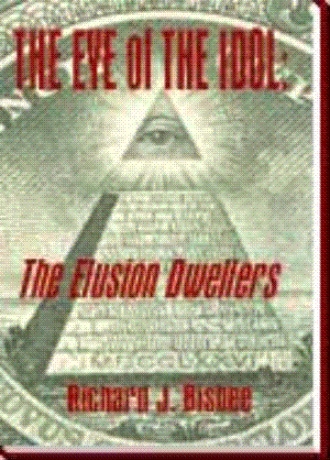 While John drove across town, Robert opined that the diatribes against devil worship as applied to John, Nancy, and especially Cassandra were nonsense, but that the prophecies about the Battle of Armageddon seemed amazingly on point, given the Arab-Jewish conflict, and the strategic importance of the area's known oil deposits to the western industrial nations. In addition, he had read a brief account of Nostradamus, a sixteenth century mystic whose predictions regarding the future up to the present and beyond were incredibly accurate, and famous world-wide.

"First of all," John began, glancing at Nancy, his co-conspirator, with whom he had discussed this very topic on several prior occasions, "the biblical prophecies and the predictions of Nostradamus are stated in allegorical, cryptic language. In most cases it is easy to fit the so called prediction to whatever occurs on an ad hoc basis, especially, in light of the fact that you can pick and choose from innumerable definable events. Secondly, even if that were not so, how do you know that there isn't a conspiracy among scholars and librarians, the keepers of such material, to continually update these so-called prophecies, to write and re-write them to fit whatever happens?"

"With the Bible, at least, you'd think someone would notice and object."

"In that case, probably yes, but as I said before, the prophecies are sufficiently vague or ambiguous to be adaptable to a variety of situations, that is, if you go back to the actual text, and don't rely upon contemporary interpretations, such as the sermons we just heard. For example, how does 'the budding of the fig tree' in any way indicate much less conclusively refer to the founding of the modern Jewish state? And there've always been earthquakes, heart disease, perplexity, wars and rumors of wars. So how do we know that the Second Coming is imminent? But, even so, I do not rule out the possibility of extraordinary individuals, prophets or a certain type of medium, if you will, being able to catch glimpses of the future. I have seen too many strange things to believe or disbelieve anything with absolute certainty. Nonetheless, I suspect that most, if not all, of these prophecies come true are but a variation of the shell game."

Robert nodded, agreeing that it was difficult to say for certain, and that the world was run on many lies, layers of deception, mendacity.

"What I suspect is really happening, Robert, is what I call the Teutonic Imperative. Western civilization is dominated by the descendants of Germanic tribes, once northern Europeans. They, or rather, we possess the most highly sophisticated technology in the world, and have for many centuries. Thus equipped, our ancestors 'settled' the Americas and Australia by virtually wiping out the native inhabitants, estimated to have once numbered in the hundreds of millions. Presently, only the peoples of the Soviet Union have comparable military sophistication, and they are dominated by whites, physically similar to the Germanic peoples. Among the nations dominated by the black, brown and yellow races, only Japan has comparable nonmilitary technology.

But even though white people, especially those descended from Germanic tribes dominate the most technologically advanced and powerful nations on earth, we are a definite minority in population, and that gap is widening. The black, brown, and yellow races have been breeding at a much higher rate than us. As a result, this planet is quickly becoming vastly overcrowded--experts estimate that world population will be between six and seven billion by the year two thousand. Even if we distributed resources to better feed, clothe, and shelter everyone, there would be territorial problems. The Nazis called this Lebensraum. People are designed to desire living space, or room. So what do you think is eventually going to happen? Our major white religions, Judaism and Christianity, have supplied the answer with great foresight. We have a one day war of 'fire and brimstone,' and later an 'Armageddon,' thereby wiping out a billion or two people, overwhelmingly of the black, brown, and yellow races, and orchestrated by the United States and the Soviet Union who, at least ostensibly, are planning to destroy each other. They, the people in charge of history, may even bring the cynical old leaders of Asia, the 'Kings of the East' in on it--get them to send a significant fraction of their populations or armies to this or that location where they can conveniently be neutron bombed out of existence in exchange for inside information on where else it would not be wise to be on that fateful day or days. Given the vastly disparate technology, I doubt that the Asian leaders could get a better deal. Even so, for the ruling classes it could be cozy all the way around.

For years the American people in particular have been brainwashed into accepting the inevitability of this scenario, or a similar one, but, of course, it is not generally perceived as a religious justification for genocide. Instead, it is presented as being the culmination of centuries of prophecy, the Second Coming of Christ. There's nothing people like more than acknowledging the veracity of prophetic writings---you know, 'God's will be done.' It makes them feel all nice and religious inside. At any rate, after the deed is done, the people of the western world will feel remorse for what, at least in result, many wanted to happen all along, and so will turn on the apparent leader, a mere front man for the ruling elite who, presumably, will have known for a long time that he was being set up but, for whatever reasons, go along with it anyway, declare him the Beast or Anti-Christ, and, voila, good has triumphed. They'll probably even con someone into thinking that he's the Second Coming of Christ--after all, someone will have to play the role."

Robert was thoughtfully silent. He had never looked at these well known prophecies in that context. In essence, John and Nancy claimed that the American people among others were being tricked into passively accepting what they would never openly condone, the ends desirable but the means unacceptable. Politically, the trick thus was to get them to support the development of mass murder technology which eventually would be used as an offensive means of population control without evoking guilt. Americans, especially, perceive themselves as moral people, God's elect. Basically, this was done by trumping up a rivalry with the Soviet Union.

"The Teutonic Imperative," John echoed, pleased by the seriousness with which Robert considered the analysis.

The enclosed novel was initially copyrighted on 7/10/80 as an unpublished work. It is a roman a clef and allegory foreshadowing the coming AIDS plague and attendant political/social events by a then twenty-something WI attorney with ties to political insiders in WI. To the author's knowledge, it is the first public record, albeit mostly in "coded language," adumbrating the "gay plague" foreseen by gay political and academic insiders.

Attorney Richard J. Bisbee graduated from the University of WI--Madison with a Juris Doctor degree in December of 1974 at the age of 23. He currently practices law in Milwaukee, WI.