THE DICTIONARY OF LANGUAGE POLLUTION 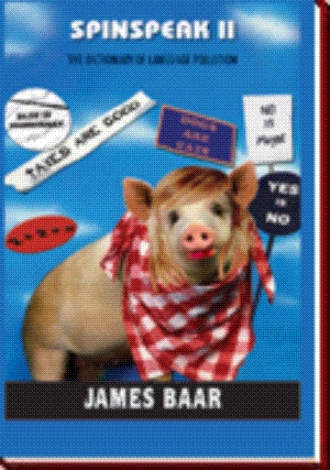 Protect yourself from spin docs, fanatics, business titans, lawyers, academics and other worthies who are willfully befogging language to muddle your brain.  Orwell knew what snake oil can do.  So did Plato.  So did Stalin.  So did Hitler.  Spin rots the mind.

From the Introduction: A History of Spin

Words are the coin of thought.  When we debase this currency and slither from gold-standard words to lead-standard words to papier-mâché words, we debase our ability for rational discussion; our ability to think, to make logical judgments, to solve problems.  Instead, we increasingly spend our time studying and arguing about fantasy models of the real world.

From the Technical Glossary

adspeak = a long-established and peculiarly American form of language pollution in which a totally or partially fictional reality is described in a highly sincere-sounding vocabulary: fantasy is presented as fact.  See: fantasyspeak.

anchorweep = maudlin, funereal tone and sighs widely practiced by airhead TV anchors to indicate deep compassion and suggest that whatever and whomever they don’t like is apparently failing.

accountability = fuzzball for phony assurance that despite what clearly  is  happening the bad guys will get theirs in the end with the unstated definition of "end" being "long after I am out of office if ever."   See: justice, rule of law.

bad behavior = softballtalk for such peccadilloes as bilking shareholders, giving and accepting large political gratuities and being serviced by your mistress in the Oval House while talking on the phone to congressmen.  See: CD and everyone does it.

children = pathostalk word usually invoked with a catch in the throat and suddenly moist eyes. e.g., spending cuts that would deprive children of (fill in blank); often employed in the French language universal: the children implying all children in the universe thereby elevating compassion to the global level.

data integrity problem = corporatespeak for recognition that the books have been well cooked.

empower = libtalk for  the act of arbitrarily giving

If you believe that no matter how much lipstick you put on a pig, it is still a pig, then this book is for you.  .

Spinmeisters today are everywhere. They seek to befuddle you by polluting our language,  gussying up and diddling down our everyday words, moving familiar signposts, changing the maps in our heads.

Our words – the gold standard coins of rational thinking -- are being debased.  Spin rots the mind.

Spinspeak II: The Dictionary of Language Pollution is designed to help you fight this slimy tide of fog.  The book contains:  a history of spin;   more than 1,100 current definitions of spinspeak in politics, business, government, academia, health care, the arts and everyday life; a technical glossary describing more than 80 infectious varieties of wordspin, lookspin and soundspin.

Skeptical exposure is the solution wherever the fog of spinspeak roils communication. The mind you save could be your own.

James Baar is a writer, international corporate communications consultant, journalist, corporate communications software developer, former business executive and journalist and  sometime college lecturer. He is the author of a satirical novel on business and public affairs, The Great Free Enterprise Gambit; four books on politics and technology; a forthcoming novel, Ultimate Severance; and a forthcoming collection of short stories, The Real Thing and Other Tales. He is a graduate of where he majored in philosophy.  He and his wife and small dog, Fred the Affenpinscher, live in .