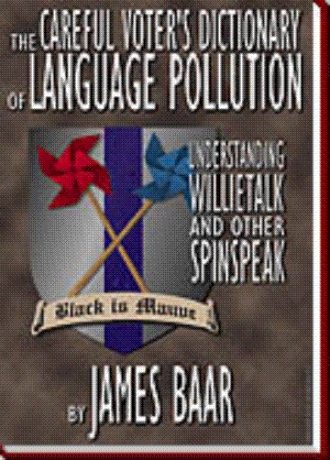 The English language today is being polluted almost beyond recognition from what it was in the middle of the 20th Century. In fact, as the Century ends, American English is undergoing an Orwellian catastrophe.

When Alice met Humpty Dumpty on her famous excursion through the looking-glass, he told her that when he used a word it meant 'just what I choose it to mean.' If Alice were to visit Washington today and she happened to see an elephant on the Mall or in the Lincoln Bedroom, Humpty Dumpty in all probability would tell her that what she saw was a St. Bernard; she should feel perfectly safe to take it home with her; it could sleep by the fireside when it wasn't saving travelers lost in the snow.

This may sound mildly humorous at best; silly, at worst. It also is very serious; in fact, it is potentially deadly to human reasoning.

Think what happens, to stay with Alice's problem, when you no longer deal with the elephant based on several thousands years of accumulated experience in dealing with elephants; when, instead, you draw on the world's accumulated experience in dealing with St. Bernards. First, you put a barrel of whiskey under the elephant's chin; then you take it home to sit by the fire; then you take it up in the mountains to help travelers lost in the passes, You are dismayed, of course, to find that your St. Bernard a.k.a. Jumbo (now called José to reflect diversity) is failing to perform well. But you keep trying. Studies are conducted. There is much argument about what to do to solve the problem. Possibly, better training is needed. Possibly, better adjustment can be sought through psychiatric aid. Possibly, your St. Bernard, in consideration of the unfortunate socio-economic environment in which he was raised, just needs to be given more chances. Obviously, more funding is needed. And obviously we will need to educate people to be more tolerant when your St. Bernard tramples their automobiles during its morning walks...

Language pollution today is increasingly dynamic. No sooner do lexicographers strip away a layer of pollution to reveal hard-rock, real meaning than another layer is applied. All of the definitions provided here in the Language Pollution Dictionary expose current pollution of words and phrases all of which are subject to possible further mutation and pollution at any time. To understand this process, keep in mind that the basic objective of all language pollution: the selling of snake oil as nectar.

abuse = non-eradicable psychic and/or physical wounding beginning normally at birth or earlier that explains away even the most outrageous anti-social behavior throughout an individual's life. (See: victim)

according to my legal counsel = my lawyer says that what I did was not illegal so don't blame me if it was. See: no controlling legal authority.

activist = a positive descriptor of a special interest group or person favoring your position and probably benefiting from it.; a negative descriptor of an interest group or person favoring a position that you oppose Formerly strictly unpaid, but increasingly involved with personal material gain. (See: special interest and citizens groups).

ADL = gobbledegook acronym for 'Activities of Daily Living' which, in turn, is Medicare gobbledegook for referring in pseudoscientific toney manner to such tasks as brushing your teeth, tying your shoes and eating your soup.

adversative = spintalk for tough military school hazing scrubbed up with a new label after court-ordered admission of women.

affinity room = a room in a library where members of a designated group can go and read about themselves. e.g., Rooms for homosexuals, blacks, South Sea islanders, Inuits. No rooms are known to have been set up for Americans of German, French, Italian or Japanese ancestry.

age appropriate = public school educational technigook for a student who does not cause trouble and can see lightening and hear thunder.

agency = governmentspeak neo-verb meaning to give something normally earned to those who have not done so. (See: empower, disadvantaged)

age appropriate behavior = the level of behavior in public school at which one has to demonstrate failure in order to receive Social Security (SSI) disability payments; such payments often based on parent-encouraged performance are known as crazy money in the welfare constituency.

aggressive = badguy label for anyone competently doing his job in disclosing outrageous and/or criminal conduct. See: goes too far.

alone = potentially compromising condition that can be denied with the willietalk phrase 'not alone together' if you leave the door open a crack e.g. There were a lot of times when we were alone but I never really thought we were...It depends how you define alone. (President Clinton grand jury testimony.)

all about = a generally fallacious and usually all but empty omnibus phrase that pretentiously implies great wisdom as in 'democracy (happiness, education) is what this program is all about.' A variety of Chinese-lunch talk.

Protect yourself from spin docs, polls, fanatics, business titans, lawyers, academics and other worthies who are willfully befogging language to muddle your brain. Orwell knew what snake oil can do. So did Plato. So did Stalin. So did Hitler. Spin rots the mind.

Here are hundreds of helpful definitions of polluted words and phrases in current use including: alone, courtesy call, customer satisfaction, defining moment, rightsizing, investment, the rich, the poor, the children, mean spirited, sexual relations, alternative turkey, liberty impaired and values clarification. The Dictionary arms you with an intellectual scalpel for de-layering the thick cosmetic overlay of public communications that obscures the real world.

Also included is a short history of language pollution, a selection of great examples of polluted words of the recent past, and a Glossary of Technical Terms such as plastertalk, willietalk, bravebabble, Halloweentalk, tin-eartalk and Trojan-horse construction.

This book is designed to help any careful voter who yearns for a world where, regardless of what anyone swears under oath, that, in the words of T.S. Eliot, 'a cat is not a dog.'

James Baar is a writer, international communications consultant, journalist, corporate communications software developer, business executive and college lecturer. He is the author of a satirical novel on business and public affairs, The Great Free Enterprise Gambit, and four books on politics and technology. He lives in Providence, RI.