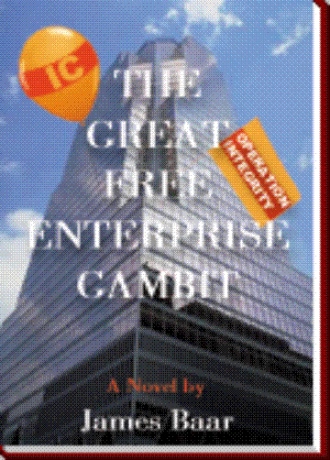 A million or so people hurtle frenetically about the midtown streets. Traffic on the Avenue of the Americas does not move. Possibly it will never move again.

In grubby concrete Grecian urns on the curb between Fifty-fifth and Fifty-sixth Streets six spavined trees try to bud. They will fail. The all-polymer Early American pine façade of the world headquarters building of International Coagulants permanently shields them from any nutritional sunlight that might penetrate to street level.

But the sun is shining.

Eighty-eight floors up from the windows of the International Coagulants Tower spring sunshine can be seen everywhere. It lights the great, blue sky over New York. It gleams through the windows, bouncing off white, fat clouds. It sparkles off the blue metal boxcars of air-conditioning equipment crowning the tops of the other Manhattan towers that pierce skyward through the gray sea of smog.

J. Wigglesworth (Wiggy) Pratt, chairman and chief executive officer of International Coagulants, stands somewhat unsteadily at one of the great windows in the foyer outside the IC Tower's World Conference Hall and momentarily looks at the view. Wiggy is a sixty-two-year-old model of a business statesman: With the benefit of only one jowls and one eyelids adjustment, his profile is as well formed and clean cut as the day he left Princeton; his silky, white hair is perfectly parted and combed; his skin, except for a few telltale red lines, is slightly tanned; his tall frame is lean and yachty. As he wrenches himself away from the window, he thinks of his condominium on Aruba, sighs inwardly, and somewhat unsteadily resumes his heavy burdens.

In fact, those burdens this morning are particularly heavy. In not more than five minutes he must talk to the business press. He does not like to do this anytime, and today he hates the idea. But, unfortunately, there have been problems. In an up market, IC stock has moved downward with painful consistency. The usual confidential phone calls to security analysts have had no effect. Bankers in such places as Frankfurt and Zurich have made unkind remarks. A number of pension fund executives have also been less than pleasant. Wiggy feels a need to renew general confidence among what the IC Public Affairs Department refers to as his many publics.

As an initial step toward renewing confidence, he steps quickly from the window into a private washroom and grants himself an extra quarter-tumbler of Scotch. Then, adjusting his already impeccable tie, he walks briskly into the IC World Conference Hall.

About two dozen business writers are gathered there. They have been sipping coffee and eating pastries. The coffee is served in Limoges-type cups made from reprocessed soft drink bottles by the IC Fine Housewares Department. The pastry is from House of Buns, an IC fast-food franchise chain.

The business writers sit in a three-row semicircle in plush oversized conference chairs upholstered in a bright orange -the IC color. Some of the writers dress like bankers and carry pocket calculators, gold pencils, and attaché cases. They assume the attitude of senior loan officers. Some are rumpled and openly pugnacious. A few in business gray prepare to fawn nervously in hopes of future employment. All but the latter smell trouble and happily anticipate claiming major space in their publications for particularly nasty stories.

At the base of the semicircle of chairs is a small, raised platform with a table. On the left side of the table sits Orrin Boon, IC senior vice president and chief financial officer. He has the face of an aging teen-ager but is devoid of all hair. He could be a moonman in a late afternoon TV repeat movie. At the right end of the table sits T. J. Lightmeade, executive vice president and twice-rejected heir apparent. He is a lawyer. He looks kind and avuncular. He isn't. Wiggy sits in the middle, with great dignity. He is a Roman senator with silver hair and blue but somewhat fishy eyes.

Directly behind Wiggy sits Leslie Gross, vice president of corporate information. He is pleasantly pudgy and very jolly. He is also almost totally incompetent. Leslie has on his lap a large, orange notebook. He always refers to it as 'the Bible' and winks confidingly when he says it. The notebook contains carefully designed responses to hundreds of questions that he suspects may be asked. They seldom are. Or, if asked, the answers are seldom located in time.

'Thank you so much for joining us this morning,' Wiggy begins and beams his board-of-directors smile. 'Always a pleasure to meet with you. I hope everyone has had some of Leslie's famous Danish pastry and coffee.'

'No goddamn cheese Danish,' a writer (rumpled variety) says loudly to his neighbor near the back row. 'Wait'll they see my story.'

'We want to keep things as informal as possible. I have a few words to say. Then we'll take questions.'

He then introduces 'Or' Boon as one of big business's 'dazzling financial wizards' and 'Tommy' Lightmeade as 'our ambassador extraordinary.' Little anecdotes made up by Les to demonstrate human frailty at high corporate levels are offered on each. The job seekers and Les chuckle a lot.

Wiggy adjusts half glasses on his beautiful nose and begins to read from a script.

'Our meeting today is part of our new policy of helping you gentlemen follow our growth and our developing business. After all, when you have a twenty-billion-dollar company like International Coagulants, even we who are so close to it have some trouble keeping on top of everything.'

'As you know from our quarterly report yesterday, earnings are indeed rather down. Twenty percent from the first quarter; twenty-five percent from the same period last year. But numbers, gentlemen, plain numbers just do not tell the story. Frankly, to put it another way, the stories that some papers carried this morning do not tell the story either.

This wild and satiric tale of big business and sleazy political derring-do has been called one of the funniest business novels ever written.

International Coagulants, a conglomerate corporate octopus, is bleeding around the world from massively poor business decisions. But a cast of questionable characters are determined to save it for a variety of questionable reasons even as they undercut each other for control. The date: the late '70s. It could be this morning.

J. Wigglesworth ('Wiggy') Pratt, IC's CEO, is a thirsty 'Roman senator with silver hair, great dignity and blue but somewhat fishy eyes.' He tries to save the company with a series of smarmy new ventures and a secret deal with Major Ibn Mamoud, elegant Levantine representative of the Sheik of Sharm who owns Yankee Properties, Inc.

Meantime, Ward Winchester Read, Wiggy's arch rival who looks like a cross between Jack Kennedy and a frustrated battle tank commander, plots a takeover from exile in a plush non-person suite in the IC Tower in New York.

Others with key roles are the power hungry Senator Jefferson Jennings Bryan of the great state of Louisiana; a sinister ex-CIA operative and master of disguise; a Mexican Zapotec Indian oil billionaire named Joe the X; and Gaston Edsel, a former fork-lift truck operator elected to Congress by a fluke, elected Vice President in error and elevated to the White House when his running mate resigned after being exposed as an unemployed summer stock impersonator of presidents.

There are multiple plots, slippery maneuvers, betrayals and stumblebum connivings all swimming in a thick marinade of spinspeak and cant. The IC Tower itself is besieged by a private IC army of social dropouts recruited under a government contract to serve as peacekeepers in Third World countries. The stock market swings insanely, folly is loosed and the world wanders toward cataclysm. A final surprise resolution comes decked in yards of euphemism and offers at least a visionette for tomorrow.

'--the dialogue is crisp and crackling, the zany insanity infectious.'

'--a very funny satire on our method of doing business, the political scene and the international one.'

'As befits a corporate satire, every hatcheted and hatcheting boardroom conniver dresses in, lives surrounded by and uses only the choicest brand-name stuff.'

'--the world of wheeler-dealers comes through with mordant verisimilitude, from corporate gambols at the 'Greenbrier' to the White House (where President Gaston Edsel, former fork-lift operator glumly picks his teeth), with neatly irreverent swipes at everyone -- statesmen, media hipsters, computernicks, investment bankers, and assorted ethnics.'

James Baar is a writer, international communications consultant, journalist, corporate communications software developer, and business executive and college lecturer. His latest book, The Careful Voter's Dictionary of Language Pollution (Understanding Willietalk and Other Spinspeak), is available from 1stBooks Library as an electronic book and in softcover; also from booksellers throughout the world. In addition to The Great Free Enterprise Gambit, Baar is also the author of four non-fiction books on politics and technology. He lives in Providence, RI.