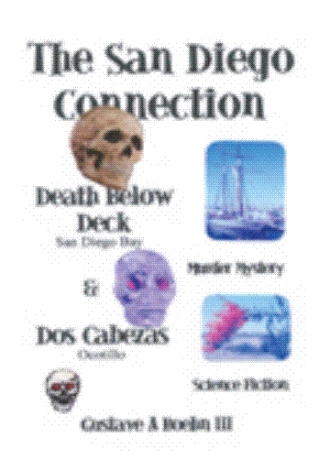 Thursday morning kayaking is a ritual for them, and they plan an excursion to a different part of the bay each time they venture out. They had previously explored the bird sanctuary, feeding grounds for sea turtles in the warm water around the Duke power plant, and the canals of the elite bay front community, Coronado Cays. This morning they have plans for a trip to a boat graveyard that’s rumored to exist off shore from the tenth street pier in National City, which is two miles north from their launching sight. “I’m anxious to find out if the rumor about the boat graveyard is true,” Lee said. “If it turns out that it actually exist, I’m looking forward to exploring the interiors of some of the old derelict boats.”

“There’s only one way to find out, so lets get underway,” Jim said excitedly.

Hugging the shoreline it takes them a little less than an hour to reach the graveyard sight, and they’re taken aback with what they observe. There are at least twenty derelict boats scattered around the area. Hulls protruded out of the shallow water from boats that had sunk and were lying on their sides. In some cases only the top of a mast is visible above the surface of the water from smaller boats resting upright on the bottom. The water appears to be six to eight feet deep, and the Port Commission had all un-seaworthy and abandon boats towed here to rust or rot away.

One of the derelict boats is a good sixty feet long, and it appears to be an old wooden schooner. It’s resting on the bottom listing badly with its’ mast projecting twenty feet into the air. “It appears the only boat worth exploring is that old schooner, but this place gives me the creeps. Maybe we should just forget about going aboard,” Lee said sounding a little apprehensive.

Death Message From the Past
Gustave A Boehn III
£8.02

Jim and Lee are in their kayaks exploring a boat graveyard in the San Diego Bay, when they decide to board an old wooden schooner that’s sitting on the bottom in shallow water. The schooner is listing badly with most of its’ hull exposed. With flashlights in hand they go below deck and make their way aft along a passageway. They come across a gaping hole in the deck where the boards have rotted away. Shining their flashlights down into the darkness they discover a horrific crime scene. One so terrible, it turns the stomachs of the police chief and the two hardened homicide detectives assigned to the case. The investigation eventually leads to an international manhunt.

Two guys embark on a weekend trip to the desert in search of an oasis with giant palm trees. It’s rumored to be located in an area called Corrizo Gorge, which is one hundred miles due east of San Diego. Just before daybreak they stop to have breakfast in the small desert town of Ocotillo. The only people in the restaurant at that early hour are the sheriff and the elderly woman proprietor.

The sheriff is more than happy to give them directions to Corrizo Gorge. Upon the sheriff leaving, the proprietor informs them that Corrizo Gorge is located on sacred Indian land, and rumored to be protected by their Gods. She also enlightens them about several accidents that happened there that cost people their lives. She was hoping this information would discourage them from venturing into the Gorge, but they fail to pick up on what she was trying to get across to them. Upon entering Corrizo Gorge, their worst nightmare begins to unfold.