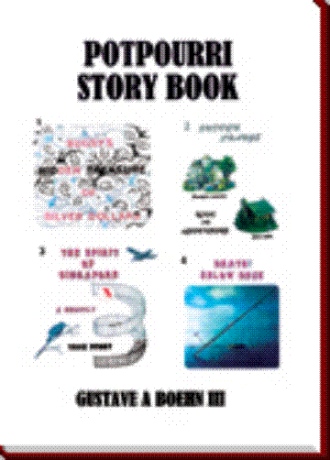 "Shortly after Bugsy was assassinated, I was shot in the back and paralyzed from the waist down. I'll no doubt have expired by the time this note is discovered, and you'll be the only one aware of the secret hiding places. Having no living relatives and loathing the Mafia, I chose this book to place the note in with hopes that someone would find it that's interested in searching for hidden treasure."

I excitedly made my wife, Mary, aware of the note's contents and the coin dealer's estimated value of the silver dollars. Being pessimistic in nature, she asked, "How do you know the note isn't just a hoax?"

In their excitement, they wasted no time in heading for the hatchway to descend the ladder that would take them below deck. Jim turned on his flashlight as they slowly made their way down the ladder into the pitch black, foul air interior. When reaching a lower deck, they stopped and Jim swung the light around. There was nothing but bulkheads with passage ways leading fore and aft. They chose to go aft. It was one spooky place to be but neither one would admit they were frightened. They hadn't gone more than ten feet along the passageway when they came upon a gaping hole where the deck boards had rotted away.

Treasure of Silver Dollars is fictional. It's about a modern day treasure hunt by a husband and wife. The husband finds a note in a slit in the front cover of an old book on prospecting for gold he purchased in a used bookstore. The note was written by Bugsy's right hand man who had since passed away, revealing where he and Bugsy had hidden a million silver dollars. Bugsy had skimmed them from the profits when he managed the Flamingo Hotel in Las Vegas for the Mafia. The husband checked with a coin dealer to find the silver dollars are now worth around ten million dollars in today's coin collector's market.

Sudden Change is fictional. It's about a girl who was born to very wealthy parents and raised primarily by a nanny who catered to her every need. She was totally spoiled and at age twenty-one she had become an arrogant, selfish, self-centered individual, even her parents couldn't tolerate her unforgiving behavior. They now realized they were the ones responsible for creating this unsociable monster.

They felt it was their duty to try and correct the situation, otherwise, she would live a very lonely life, and one without love. Realizing it was too late for psychotherapy, they deemed it necessary to take a more drastic corrective action for her own good. What the parents had planned for their daughter, was beyond anyone's imagination.

The Spirit of Singapore is nonfiction. It's about a close encounter with the spirit world. It began when I went to Singapore to work for three months for an Oriental man who owned a small aerospace company. My wife accompanied me and we stayed in a condo unit on the twenty fifth floor, owned by the man I was working for. We were unaware of the horrible tragedy that took place there involving the owner's wife, six months before we arrived. It wasn't long before strange, inexplicable thing began to happen, making it clear we were not welcome to stay there.

Death! Below Deck is nonfiction. It's about two guys in their kayaks exploring a boat graveyard in the San Diego bay. They boarded an old wooden schooner that was setting on the bottom in shallow water, listing badly but with most of its hull exposed. With a flashlight in hand they went below deck and made their way aft along a passageway. They soon came across a gaping hole where the deck boards had rotted away. Shining their flashlight down into the darkness, they discovered a horrific crime scene. One so terrible, it turned the stomachs of the police chief and the two hardened homicide detectives assigned to the case. The investigation eventually led to an international manhunt.