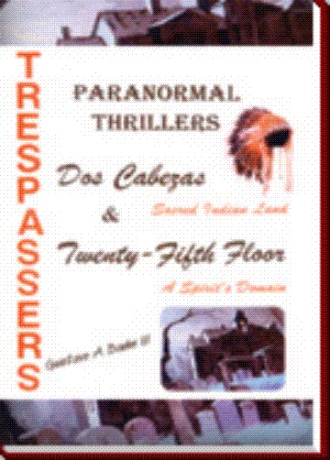 As the sheriff waddled across the floor he place a cowboy hat on his head, cocking it slightly to one side. His massiveness barely allowed him to pass through the door.

I turned to Lee and said, "What the hell are we getting ourselves into? I’m not so sure we shouldn’t pack it up and go home. The sheriff comment, ‘if you make it back’ scares the hell out of me. I also don’t relish the thought there’s a chance we might become a banquet for a mountain lion."

"You got that right," Lee said, "but after coming this far, why don’t we at least go out to the water tower and look around. We’ll make sure we’re back at the water tower before dark. If we stay on the railroad tracks there’s no chance we can get lost."

"Julie? From your experience of living in the desert, what’s the chances of being attacked by a mountain lion in the day time?" I asked, in a concerned manner.

"I have lived here for most of my life and I have never heard of anyone being attacked by a mountain lion, day or night. I think old Ray was just trying to throw a scare into you guys. He likes to have fun that way with city folks."

"Well, that son of a bitch sure did a good job. He damn near ruined our whole trip," I said.

"What Ray told you about the location of the oasis is true," Julie said. "The directions he gave you to reach the water tower are also good. I have been out to the tower but I have never ventured into Corrizo Gorge. I heard the terrain was extremely rugged, making it a dangerous place to explore. What Ray meant when he said, ‘if you make it back,’ is that most people who live around here shy away from that area. There are many rumors about inexplicable things that have taken place in Corrizo Gorge. One rumor has it that the land was sacred to the Indians that once lived in those mountains, and anyone that trespasses will be dealt with by their Gods."

"Come on, Julie. What are you trying to do? Throw a scare into us like Ray did? What kind of strange things are rumored to have happened?" Lee asked.

"When, Mr. Spreckles, the sugar tycoon was building the railroad line that runs from "Imperial Valley" to San Diego through that area, he had all kinds of problems. He came close on several occasions to stopping the project altogether. He had brought in cheap, Chinese laborers and many of them lost their lives. They died due to several tunnels caving in, the collapsing of trestles that were being built across deep ravines, and rock slides. Many of these accidents should never have happened, because there was no plausible explanation as to why they did. After the railroad was completed, accidents continued to occur. Several freight trains derailed for no apparent reason and tumbled down into deep gorges, killing everyone on board. A few years ago two boys were riding their motorcycles on the tracks, and while going through one of the tunnels they were hit head on by a train. Their motorcycles were found a mile from the accident, rolled up into a ball from being drug under the train. Since then several tunnels have caved it making the railroad inoperable."

"Well, Julie, I’m sure glad we stopped by here for breakfast," I said. "From what you and Ray have told us about Corrizo Gorge has aroused our curiosity, but it would probably be best for us to cancel our plans to explore the area. We’ll probably drive out to the water tower and look around. We might even walk the tracks to the tunnel and take a few pictures."

We sat in the booth for a while finishing our breakfast, drinking coffee and discussing our change of plans. The time was seven thirty when saying good-bye to Julie, and thanking her for enlightening us about the Indian Gods and the history of Corrizo Gorge.

Two guys embark on a weekend trip to the desert in search of an oasis with giant palm trees. It is rumored to be located in an area called Corrizo Gorge, which is one hundred miles due east of San Diego. Just before daybreak, they stop to have breakfast in the small desert town of Ocotillo. The only people in the restaurant at that early hour are the sheriff and the elderly woman proprietor.

The sheriff questions them on their presence in that area at that early hour. Having nothing to hide, they explain to him what their intentions are. The sheriff is more than happy to give them directions to Corrizo Gorge. Upon the sheriff's departure, the owner makes them aware that Corrizo Gorge is located on sacred Indian land, and rumored to be protected by Indian gods. She also mentions a few accidents that had taken place there, costing people their lives.  This information did not deter them from venturing into Corrizo Gorge, where their worst nightmare begins to unfold.

They had promised their wives they would return home Sunday night. When Monday morning arrives and their husbands still have not made an appearance, the authorities are notified, and a full manhunt is launched. A two-week search ends unsuccessfully in locating the two men. It is then that the wives set out on their own to find them. Their search also turns into a nightmare, and results in an inexplicable find.

My job as an aerospace design engineer, led me to Singapore to work in a small aerospace company. The owner of the company insisted my wife and I stay in a condo he owned on the twenty-fifth floor of a condo complex, rent-free. We were unaware of the horrible tragedy that took place there involving his wife, around six months before we arrived. It wasn’t long before inexplicable things began to occur, letting us know our presence was not welcomed.