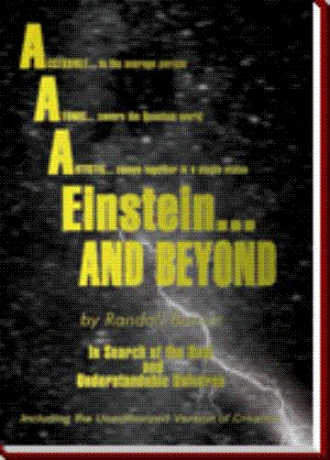 Please note that during my next demonstration, at no time do my fingers ever leave my hand. Also, I do not break out into a series of formulas that Einstein himself would have trouble understanding. No, this is your local AAA Einstein working here, with no pretensions towards being erudite, just trying to be plain and understandable.

But I feel I must make an announcement. I am about to solve a Great Mystery. One that has perplexed and plagued modern science for a number of years now. One that has no apparent solution. This may not seem modest at all, or even permissible for just a AAA Einstein... But...

I am going to do it anyway.

I am going to solve it for you on these ensuing pages. The solution will be simple, straightforward...subject to anyone's test of common sense.

MYSTERY OF THE EXPANDING UNIVERSE

There is no mystery at first.

Everything seems clear. The Primordial Mass of unimagined density expands... Matter is thrown outward from the Primordial Mass in all directions...a scenario that describes a sphere, as previously pointed out.

The Progression of this Creation...because it is a Creation...goes like this. From the extreme density comes a phase of relatively rapid expansion...followed by slower expansion as the original impetus loses force, and as the Gravity of the expelled masses begins to work its attractive force, which is a brake on the continuing expansion. There is cooling, there is coalescence. There is the forming of galaxies and stars and planets. All right. None of this defies either common sense or the known laws of Physics. But wait...

Which is this. Light from the most distant galaxies from us indicates not only that the Expansion is continuing...we knew that...but also the astounding news that...it is ACCELERATING.

How can such things be?

They cannot. Not according to all the doctrines of modern Cosmology. Scientists have looked for mysterious forces in the Universe that must be driving these galaxies to ever greater speeds. And have had trouble in finding any such mysterious forces. But...what else could account for the acceleration?

No one has yet come up with a viable answer.

But I have one.

I, the AAA Einstein.

AAA Einstein is a book that tries to make the Secrets of the Universe as simple as picking up maps and directions from your nearby AAA Auto Club. Maybe it can never be that simple. Yet here you have it laid out before your eyes. How the Universe originated, what makes it run, what its future is.

Not only that, but many of the ideas are new and original. Learn what the Universal Medium is, how it works. How it controls Gravity and Time and Mass and Measurement. Learn too, the solution to current Science's Greatest Mystery...why our Universe continues to expand at an accelerating rate...

This book will give you a new outlook on Science and the Universe. You may see deeper than ever before, and in a simpler, easier way. You may become a AAA Einstein yourself...

Randall Barron has published various articles in the Shakespeare Oxford Newsletter and has addressed Shakespeare conferences in the United States and England. His Shakespeare Authorship Question website is now linked to the prestigious Proquest Literature Online. His three Shakespeare books are available through 1stbooks and the major Internet booksellers.

Another lifelong interest is Science, especially in the fields of Physics and Cosmology. Wanting to know the deepest secrets of Our Universe, he has over the years investigated many scientific theories. In this book he shares new and controversial ideas on Our Universe...its origin, how it works, what its future is. Which are based on Einstein, but radically different, too. Original solutions to important scientific mysteries are presented.

Email the author at Webrebel@Prodigy.Net.