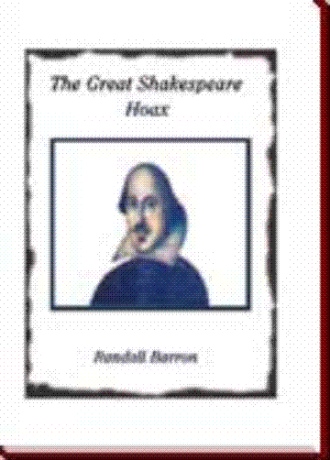 PREVIEW of The Great Shakespeare Hoax (from pages 5 and 6)

Let us suppose you know nothing whatsoever about the Great Shakespeare Hoax. More, that until you are shown otherwise you prefer to believe that William Shakespeare of Stratford-upon-Avon wrote the works of Shakespeare.

That is a perfectly honorable position, and one held by the vast majority of humans who bother even to think about it at all.

If I could show you that the True Shakespeare, whoever he might have been, was a dedicated tennis player? Would that cause you to think twice about the man from Stratford as Shakespeare?

Well, if I could show you where Shakespeare himself states directly that he is a knight...would that make any difference? After all, no one to date has ever claimed knighthood for the man from Stratford-upon-Avon.

Then, if I could show how Shakespeare himself states clearly that he was made lame at some point in his life...and then point out how no one has ever claimed William Shakespeare of Stratford-upon-Avon was ever said to be lame...would that cause you to think twice or begin to wonder a little bit about the true identity of Shakespeare?

And if Edward de Vere, the 17th Earl of Oxford, were shown to be an accomplished tennis player, who was also a knight, and who was lamed for life in a savage duel or street fight with Sir Thomas Knyvet...would that give you any reason to consider changing your mind about the possible true identity of Shakespeare?

Well, I intend to do all that in these pages.

In addition you will find some questions answered about the man from Stratford-upon-Avon. Such as...

Did he have a nice singing voice?

Was his hair really a mess?

Did he have notably skinny legs?

Did he really wear satin suits as in the famous Droeshout portrait universally reproduced to represent Shakespeare?

None of the dozens of Shakespeare biographies will answer these questions to anyone's satisfaction, because their authors simply did not know where to look to find the answers.

But I will answer them all in these pages. Or if not, at least dance around them in an entertaining manner, which in such murky territory, is sometimes the best that can be done.

We all know that William Shakespeare of Stratford-upon-Avon wrote the works of Shakespeare.

What if he didn't? What if it were not true? Would it make any difference to the world?

It would have made a great difference to Elizabethan England. And so arose the necessity for The Great Shakespeare Hoax...

Randall Barron has published various articles in the Shakespeare-Oxford Newsletter and has addressed the 1998 Shakespeare conference at Concordia University.

He has a website expressing his views on the Shakespeare Authorship Question and has two novels in preparation concerning the same.

As to his Shakespeare research, he is most proud of having pointed out on his website and to the audience at Concordia University where Shakespeare himself declares he is a knight, and of his investigations into Love's Martyr, an enigmatic and obscure book published in 1601, which he believes is another important key to understanding The Great Shakespeare Hoax.

He and his wife, Gloria, also were the first to discover and call attention to the Inquisition Post Mortem of Edward de Vere in London, in 1992.