Shakespeare Through the Looking Glass 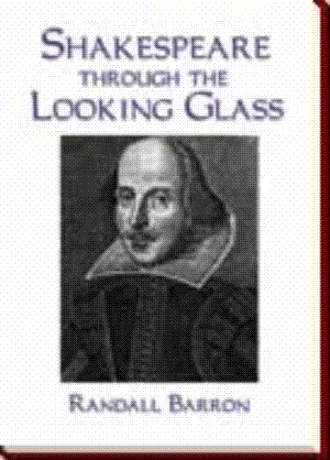 Some questions and issues considered in this volume are...

1. Who wrote the Dedication to Shakespeare's Sonnets? The true answer may surprise you, an answer never before suggested by any Shakespeare scholar anywhere.

2. What other still unrevealed secrets does the strange Dedication to the Shakespeare sonnets hold?

3. Shakespeare of Scotland? Who could have been called that? And how does he hold the key towards unlocking the Dedication mystery?

4. Who had possession of the Shakespeare Sonnets when they were offered for publication?

5. Does the Dedication itself answer question number 4?

6. What does exploration and colonization of the New World have to do with the Dedication to the Shakespeare sonnets?

7. Oxfordians...those who believe the 17th Earl of Oxford was the true Shakespeare...have known for a long time that the Dedication itself reveals who was the real author of the Shakespeare sonnets and who they were dedicated to. But does it also not only reveal who was the Possessor of the sonnets, but where he was from and where he was going on what may have been a secret mission for the King?

Is the Possessor's name actually spelled out for us in the Dedication if we know where to look? In addition, do the presence of his initials hint at the activity he was currently engaged in?

8. Is Francis Bacon, the prosecutor of the young man of the Sonnets, referred to directly in two of those sonnets? If so, what does that tell us about Shakespeare's attitude towards the so-called Essex Rebellion and Francis Bacon's key role in the prosecution and conviction of Essex and Southampton?

9. Who was the Dark Lady? How did she change Shakespeare's life and work forever?

10. What may have been the earliest poem by Shakespeare that he wanted published? Was it published? And does it appear again much later in a Shakespeare play?

11. Edmund Ironside may have been an early play by Shakespeare. There is a complex four-part analogy written by Edward de Vere that almost exactly matches one in the play. Where does it appear?

12. There is a poem, an elegant dedicatory sonnet, which gives every evidence of having been composed by Shakespeare...why has it not been given admission to the Shakespeare Canon?

It is possible that this book will reveal for the first time ever who really had possession of the Shakespeare Sonnets when they were delivered to the printer for publication in the year 1609.

That person was not William Shakespeare or Shakspere of Stratford-Upon-Avon.

Neither was it the 3rd Earl of Southampton, William Hall nor William Herbert.

Someone, to use a crime analogy, never previously suspected. Never ever even mentioned in connection with the Shakespeare Sonnets.

Yet the evidence is there.

But this book goes beyond that to show the remaining secrets encoded in the text of the Dedication. What is revealed is the possessor of the Sonnets, the person who brought them to the printer to be published, and his strange and previously unknown connection to the true Shakespeare.

Plus new information on the Dark Lady. Who she was and how she changed Shakespeare's life forever. And other research that links the 17th Earl of Oxford with the works of Shakespeare. The investigations detailed in The Great Shakespeare Hoax are amplified and reinforced here with new evidence, including what may be the first poem composed by Shakespeare for publication...at age sixteen.

There is also an analysis of a sparkling sonnet which even some orthodox Shakespearean scholars have mentioned as almost certainly being by Shakespeare, but which beyond all common sense or scholarly explanation has never been proposed for admission into the Shakespeare canon...until now.

Randall Barron has published various articles in the Shakespeare-Oxford Newsletter and has addressed the 1998 Shakespeare conference at Concordia University.

He has a website expressing his views on the Shakespeare Authorship Question plus three previous books on the subject. Those are The Great Shakespeare Hoax, Shakespeare + The Queen, and a novel, Against This Rage, the last under the pen name of Robert D'Artagnan. All are available through 1stBooks.

As to his Shakespeare research, he is most proud of having pointed out on his website and to the audience at Concordia University where Shakespeare himself declares he is a knight, and of his investigations into Love's Martyr, an enigmatic and obscure book published in 1601, which he believes is another important key to understanding The Great Shakespeare Hoax. Now, to that record, he adds the startling new theories about the Shakespeare Sonnets and how the highest levels of English government controlled and shaped their impact upon the world.

He and his wife, Gloria, also were the first to discover and call attention to the INQUISITION POST MORTEM of Edward de Vere in London, in 1992....de Vere being now for many the True Shakespeare.

Shakespeare Through the Looking Glass

breaks new ground in the controversy over the Authorship Question. For the first time, the mysterious Dedication to the Shakespeare Sonnets is made to reveal all its secrets. The explosive conclusions reached herein are bound to set off outrage from orthodox Shakespearean critics and new controversy, which can only be healthy in light of the present unresolved situation.

Every reader's opinion is valuable in this important matter. Email the author at Webrebel@Prodigy.Net