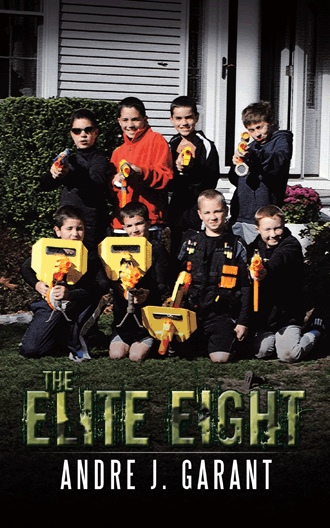 Just then, we saw a figure jump over a boulder running through the woods, heading in our direction. Immediately to our right was a green flag, so Josh and I scurried to safety and jumped down inside the foxhole. "Aw, man, this is sick," Josh whispered to me as we shoved backwards on our butts so that we were always facing the front of the foxhole. Just then, a voice cried out in German as the sound of footsteps got closer. "Man, we're gonna get this guy," I whispered as I aimed my gun at the opening to the foxhole. "Don't make a sound, Josh." "I won't," Josh whispered, sounding more like a grunt. All I could hear was my heart beating as we were both starting to sweat. Large beads trickled down our foreheads as we waited with baited breath. A few footsteps sounded above us and then stopped. Josh and I were completely still as we heard the boy move closer to the opening of the foxhole, and that's when we saw his legs appear. With amazing precision, I aimed my Vulcan right at his left ankle and squeezed the trigger. A dart fired out and pelted the boy right on his leg, causing him to jump up and begin yelling something in German. At that very moment, I scurried forward and jumped out of the foxhole as I yelled that he was out. "You're out, I got you." Thankfully, a referee was in plain sight and confirmed that I had hit the German player and took him off the course. "Great shot, Jake," Josh declared as we slapped each other a high five and then decided to split up. "Dude, take the other side and I'll go down this way," I instructed. "It's not safe for us to stick together like this." Now that the German team was down by one player, it made things somewhat easier for us, but we still had to be on our toes every single second. Just as I came around a bend in the trail, I saw a German player coming towards me. "Oh, man." I then started to run sideways through the woods heading towards a large clearing. I had to think fast and nearly tripped over a rock before I caught my balance once again and kept running. The German player was quickly gaining speed, and when I looked over my shoulder, I saw that he was getting closer and closer. I decided to take the upper hand and jumped behind a tree as I raised my gun and prepared to shoot. The German player stopped dead in his tracks and took shelter behind a rock. "Come out and play," the boy spoke in broken English. "You want to play?" I didn't say a word, but kept my eyes focused on him as my right finger remained on the trigger, ready to shoot at any moment. Suddenly, the boy jumped out from behind the rock and began firing darts at me. I ducked behind the tree and pointed my gun down at the ground as I waited for him to stop shooting. The tree was great protection and I knew the boy would not shoot many more darts for fear of running out of ammunition. As it was, he had already fired about ten of them at me as they lay in the leaves near my feet. At that moment, I saw a referee peak his head between a branch as he spotted us. Out of the corner of my eye, I could see that the boy was now backing up while still facing me with his gun pointed in my direction. "Don't play with the enemy," I hollered as I spun around and took aim on the boy. I did it all so fast that I caught him by surprise and he nearly fell backwards while tripping over a rock. Before he could take a shot, I fired three darts right at his waist and one caught him right on his left hip. "You're out, dude."

Told through the eyes of eleven-year-old Jake DeMartino, The Elite Eight is an action-packed and humorous story about eight boys who travel to Italy to take part in an international nerf competition. During their exciting adventure, the boys experience all sorts of things for the first time, but perhaps the most fun is a gigantic pillow fight in their hotel room that quickly turns into an all-out nerf war. After conquering two teams from Germany and Poland, the boys are crowned the international nerf war champions for their age group and are given a memorable recognition ceremony. Upon returning home to the United States, a very special surprise awaits them that proves to change their young lives forever. For those boys who love nerf wars, The Elite Eight might just quickly become their favorite book of all time!

Andre J. Garant lives in Tolland, Connecticut and is the author of numerous chapter novels for boys and girls between the ages of eight and twelve. When he’s not busy working as an accountant for a large healthcare system, he enjoys visiting elementary schools to speak to kids about his books and the lessons that can be learned from them. Since becoming a children’s author in 1999, he has interacted with thousands of children, many of who have become characters in his books. For more information about Andre or his books, please visit his official website at www.authorguy.com.