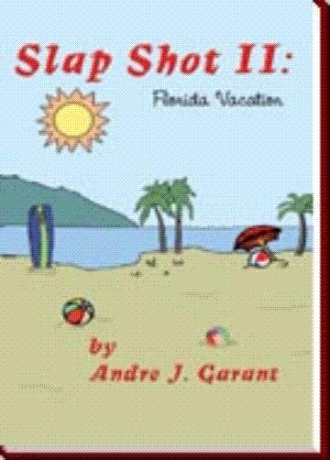 The captain slowed the boat to a crawl and then shut off the engines once again. "Okay, folks, you have approximately fifteen minutes to swim around if you want, then we’ll head on back to Key West. At this point, we’re right over the shipwreck and if you look closely enough, you can see the old boat directly beneath us."

I jumped down onto the glass floor of the boat and pressed my face to it. I couldn’t see anything but blue water and tiny fish swimming past. "Cody, let’s jump in and take a closer look. There’s nothing to see here."

"Be careful, boys," the captain urged us just before we dove off the side of the boat. Many of the other people jumped off the boat as well and began swimming around to see the shipwreck.

"Let’s take a really deep breath, then hold it in while we swim underwater," I declared.

The two of us filled our lungs to capacity, then dove under the surface and swam straight down. Sure enough, a few feet below, the top of the boat appeared. It was quite strange to see a real boat under the water like this. It looked old and dilapidated, almost as if it had been there for years and years. Actually, when I thought about it, the boat had been down there for years and years. Schools of fish swam past us as Cody and I observed as much as we could before our lungs began to burn. I rose to the surface and breathed as deep as I could to fill my lungs with oxygen once again.

"That was totally awesome," Cody shouted, gasping for air as he did.

Within seconds, the two of us plunged under the surface once more, swimming as deep as we could before the pressure built up on my eardrums. I swam along the side of the boat this time, gently pressing my fingers up against the smooth, wooden edges near the windows and doorways. It was the most incredible sight I had ever seen in all my twelve years. Cody swam alongside of me as we explored every possible angle of the boat. Soon enough, our lungs were burning once more and we pushed our legs as hard as we could to rise to the surface.

Slap Shot II: Florida Vacation is a middle-grade fiction novel for boys and girls between the ages of nine and thirteen. As the sequel to Slap Shot, Trevor and Tanner Thibault return during the summer between sixth and seventh grade to begin the vacation of their lifetime. A trip to Key West, Florida is a present they receive for their twelfth birthday, and the two boys get themselves into all sorts of trouble as they vacation with their cousin, Cody LaFleur. Meeting two girls that are also identical twins, the three boys experience all sorts of wild adventures. Will Trevor and Tanner ever return to Vermont and play ice hockey again, or will they stay in Florida to soak up the hot sunshine and become beach bums? Slap Shot II: Florida Vacation is an action packed fiction novel loaded with humor sure to please any middle-grade child.

André J. Garant lives in Ellington, Connecticut. When he’s not busy working as an Accountant, Andre enjoys writing middle-grade fiction novels for boys and girls between the ages of nine and thirteen. Slap Shot II: Florida Vacation is Garant’s fifth published novel, and is one of seventeen middle-grade fiction novels that he has written during the past four years. He is a 1991 graduate of St. Michael’s College in Colchester, Vermont and is also a 1997 graduate of The Institute of Children’s Literature in West Redding, Connecticut. Garant specializes in school visits where he enjoys speaking to upper elementary and middle-grade students about the books that he has written and what can be learned from them.