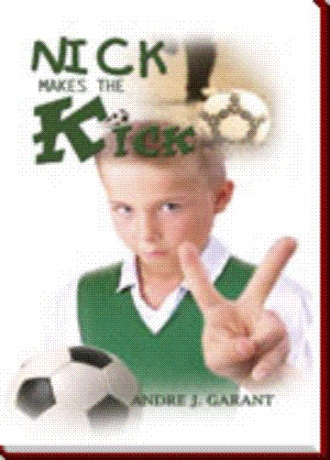 Coach Gagnon blew his whistle. "Okay, everyone, get out there on the field and line up in single fashion. Matt, you’re in the net."

I jogged out onto the field and took my position in the goal net, smiling at my teammates as they lined up in a row about six feet away from me while still inside the penalty box. "Come on, you guys, let’s see what you’re made of today," I shouted, pumping my fist in the air while I did.

"You’re going to eat those words, Gagne," Kyle yelled back.

Casey was first up in line and fired a direct kick to my stomach, which I caught easily before cradling the ball a bit. "Darn it, man," Casey muttered to himself as he trotted to the back of the line.

Jamie was next, and kicked a solid volley just to the left of my head. I lunged out and punched the ball away from the net, causing Jamie to hiss at me and shake his head.

Ashley prepared to catch me off guard as she punted the ball to the far side of the net, causing me to hurl my body as hard as I could in the ball’s direction. I reached out with both arms and grabbed the ball just seconds before I landed on the ground and skidded to a stop a few feet from the goal post. "Aw, man, I should have had that."

"Nice shot, Ash," I muttered as I stood up and threw the ball back to Coach Gagnon.

"Get ready, Matt," Kyle shouted as he kicked the ball directly at my head.

I tried to block my face with my hands, but Kyle’s kick was too fast, and the ball slammed off of my left cheek before deflecting away. "Geez, man, are you trying to kill me or something, Brodeur?"

"Just thought you might like another bruise to add to your collection," Kyle remarked with a sneering grin as he jogged to the back of the line.

My little brother Nick was next and fired a lightning fast shot directly at my waist. "Take that, Matt."

I spun to my left in order to deflect the ball, sending it back to the row of players. "Nice try, Nick, but better luck next time."

Michael was up next, and kicked the ball so hard that it nearly blew my head right off my shoulders. "How’s that for a sweet spot?" he shouted.

"Stay down, Mike," I shouted back after punching the ball away from me with my left fist, sending it back out to the penalty box.

"Okay, watch this, you guys," Billy declared as he got ready to blast me. His kick was way to the left, and so I had to literally throw myself down on the ground as fast as I could. With just a nano-second to spare, I blocked the ball with my right arm. "Darn it, Gagne, you’re just too fast."

I jumped up and threw the ball back to Coach. "Let’s go, you guys, get one past me already."

Nick Makes the Kick is a middle-grade fiction novel for boys and girls between the ages of nine and thirteen. Eleven-year-old Matthew Gagne is a soccer star in his hometown of Freetown, Massachusetts. The fifth grader eats, sleeps, and dreams soccer, and lives to play goalie for his town’s recreational soccer team. The action heats up when Matt and his little brother, Nick, are recruited to play on a special state travel team, an incredible honor for the two boys. The intense action on the travel team gets hotter by the minute, but an incredible kick by Nick Gagne brings his team a victory sweeter than any imaginable to a nine-year-old boy. When Matt and Nick return to Freetown, their hometown neighbors have planned a special victory party which allows the boys to feel that they have made a special contribution to the town they love. Nick Makes the Kick is sure to provide hours of non-stop action and adventure for any middle-grade child, even those who are not soccer fans.

Andre J. Garant lives outside of Hartford, Connecticut. When he’s not busy working as an accountant, Andre enjoys writing middle-grade fiction novels for boys and girls between the ages of nine and thirteen. Nick Makes the Kick is Garant’s sixth published novel, and is one of twenty middle-grade fiction novels that he has written during the past six years. He is a 1991 graduate of St. Michael’s College in Colchester, Vermont and is also a 1997 graduate of The Institute of Children’s Literature in West Redding, Connecticut. Garant specializes in school visits where he enjoys speaking to upper elementary and middle-grade students about the books that he has written and what can be learned from them.