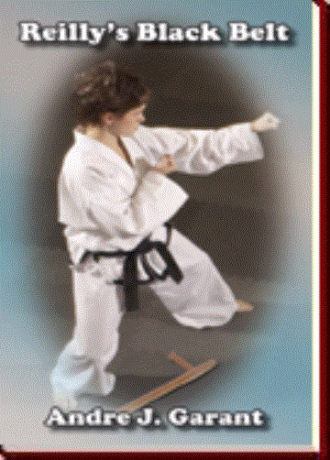 The school buses were just beginning to pull up to the circle in front of the school when Hunter and Perry came walking down the sidewalk in our direction.  Alongside were a couple of other boys who normally sided with them.

I sneered.  “Just play it cool.  He’ll probably ask me if I got my black belt or not on Saturday.”

As Hunter approached, his face took on a sour look.  “Well, well, if it isn’t the three dweebs again.  You know, no matter how hard I try, I just can’t seem to get rid of you guys.”

Perry laughed.  “Yeah, they’re like a bad penny.  They just keep showing up.”

Hunter glared at me after laughing at Perry’s comment.  “So, tell me, orangutan boy, did you end up getting your black belt this weekend?”

“I’d like to see you pass,” Matt blurted out.

“If you’re so tough and all, maybe you’ll finally fight me, carrot top,” Hunter remarked, now standing right in front of me.  “After all, if you’re such a big black belt and all, then what do you have to lose?”

I smiled at Hunter.  “Sure, you name the time and place and I’ll be there.”

Hunter was surprised by my answer and turned to smile at Perry.  “Did you hear that, Perry?  The little wussie is finally going to fight me.”

“How about right now?” I blurted out.

Hunter was truly impressed.  “Sure, but let’s get away from the school where we can fight without getting in trouble.”  After scratching his chin for a few seconds, he came up with a plan.  “Meet us at the baseball field in fifteen minutes.  No excuses, either.”

“Be there or be square,” I remarked proudly.

Perry gave me a shove with his hand.  “And don’t wimp out this time.”

As Hunter and Perry walked away, Ben gave them a dirty look.  “Reilly never wimps out and he’s going to show you up this time.”

I busted out laughing before slapping a high five with Ben and Matt.  “Let’s go, you guys.  We’ve got to get to the baseball field.”

“But I’ll miss the bus home and get into big trouble,” Ben stated, now looking worried.

“Dude, this is your one chance to see Reilly finally teach Hunter Maxwell a lesson,” Matt stated.

Reilly’s Black Belt features ten-year-old Reilly Hall as an ambitious boy who works toward earning his black belt in karate.  A well-skilled student when it comes to martial arts, Reilly feels that he’ll have no problem getting his black belt.  But Hunter Maxwell, the fifth grade bully at , begins to distract Reilly which makes it difficult for him to concentrate on his karate.  Reilly’s two best friends, Ben and Matt, insist that Reilly should use his karate on Hunter to end the bullying, but Reilly remains faithful to his belief that martial arts should only be used as a last resort for self-defense.  Will Hunter bully Reilly to the point where he breaks down and loses all concentration, or will Reilly eventually fight back and show Hunter who’s the boss?  More importantly, how will Reilly learn to deal with his frustration and channel his energy in the most efficient manner to ensure that he earns his black belt?  This novel packed with adventure and humor is especially designed for boys in fourth and fifth grade who can benefit from learning how to deal with a bully.

Andre J. Garant lives in .  When he’s not busy working as an accountant, Andre enjoys writing middle-grade fiction novels for boys and girls between the ages of eight and thirteen.  Reilly’s Black Belt is one of numerous novels that Garant has published since 1999.  He is a 1991 graduate of St. Michael’s College in and is also a 1997 graduate of The Institute of Children’s Literature in .  Garant enjoys visiting schools on a regular basis where he focuses on students in third, fourth, and fifth grade.  In addition to standard presentations where Garant speaks about all of his books, he also conducts writing workshops which can be tailored to the individual needs of each classroom.  For further information, please visit Garant’s official website at www.authorguy.com